1980 Letter Reveals Tenderloin’s Other Side 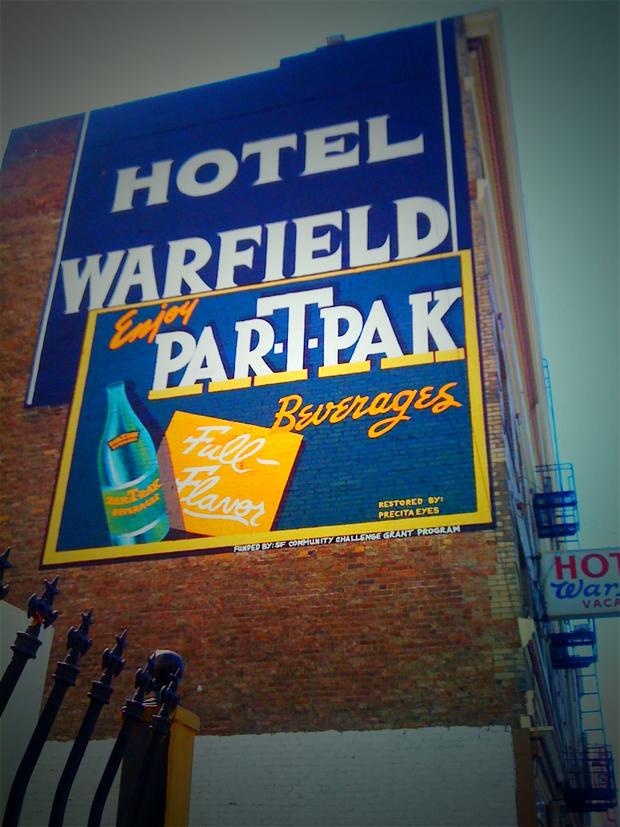 Restored historic mural on side of Warfield Hotel, Turk and Taylor

I recently came across a Letter to the Editor I wrote published in the San Francisco Examiner on September 3, 1980:

Dexter Waugh’s otherwise excellent article on children in the Tenderloin spoke of the “many myths” about the area.  Unfortunately, Waugh added to these myths by defining the Tenderloin as a world inhabited by “drunks, prostitutes, dope addicts and bums sprawled in doorways.”

As one who works in the Tenderloin, I can assure Waugh that there is another way for the area to be described – as the City’s last refuge for seniors and low-income people, as a haven for corner groceries and low-priced restaurants, and as one of the few areas remaining in San Francisco that is not blighted by skyscrapers or boutiques.

At a time when City Hall and the large developers are focusing on “renewing” the Tenderloin, it is vital for people to be aware that there is much in the area that needs preserving.

I found the letter striking for three reasons.

First, it was likely the first of over 100 similar letters/columns/articles I have written trying to correct false or misleading accounts of San Francisco’s Tenderloin neighborhood. Reporters used to automatically describe the Tenderloin as “seedy,” though Waugh’s story preferred more specific terms.

I later got to know Dexter Waugh quite well. He was one of the best city reporters San Francisco has ever had, and one of the finest people in the reporting profession I ever met. I worked with him on a lot of great stories he wrote about the Tenderloin, and he became a tremendous community advocate. Waugh died at the way too young age of 57 in 1999 and the likes of him do not come often.

Overall, media coverage of the Tenderloin has improved since 1980. Murders or violent acts occurring in the Western Addition, SOMA or Nob Hill are less likely to be wrongly placed in the Tenderloin. The media used to typically place a positive event that occurred on Geary in “lower Nob Hill” and a crime on Sutter or Bush in “the Tenderloin,” but that’s far less common today.

I also found the letter striking because my description of the Tenderloin 36 years ago—as the City’s last refuge for seniors and low-income people, as a haven for corner groceries and low-priced restaurants, and as one of the few areas remaining in San Francisco that is not blighted by skyscrapers or boutiques—accurately describes the neighborhood today.

Corner groceries still dominate the Tenderloin landscape. Even the neighborhood’s high quality restaurants offer lower prices than can be found elsewhere. The Tenderloin is also still free of “skyscrapers or boutiques.” When I wrote that letter in 1980 the zoning allowed 50 story buildings in the Tenderloin; in 1985 this was reduced to 13 stories on the border and 8 stories for much of the community.

A Neighborhood Worth Preserving

Since I wrote in 1980 that the Tenderloin “needs preserving” only a single historic building of note has been torn down:  the former CIO and ILWU headquarters at 150 Golden Gate demolished by St. Anthony’s Foundation when it rebuilt its offices on the same site. Hastings College tore down two SRO’s on Golden Gate after the school allowed them to fall into acute disrepair, and the demolition also cost us the historic Eskimo Pie advertisement painted on the side of one of the hotels.

Otherwise, all new construction has occurred on parking lots or after demolishing non-historic structures (the Yellow Cab garage at 201 Turk might have been considered historic but was replaced by affordable housing).

That record of preservation in an era of rapidly gentrifying neighborhoods across San Francisco is remarkable. And as I explain in my book, The Tenderloin: Sex, Crime and Resistance in the Heart of San Francisco,   the Tenderloin’s preservation happened despite the neighborhood becoming the first in the United States to reject designation as a National Historic District. In 2009, this omission was remedied when 31 blocks of the neighborhood were added to the National Registry of Historic Places as the Uptown Tenderloin National Historic District; preservation of its over 400 historic buildings is assured.

The Tenderloin has long had its share of troubled people, but they should not eclipse its other side. The Tenderloin remains the city’s most children filled community. As new businesses open and neighborhood safety improves, more positive media and public perceptions of the Tenderloin should follow.

And if not, defenders of the Tenderloin should let editors know.

Randy Shaw is Editor of Beyond Chron and Director of the Tenderloin Housing Clinic, where he was working when he wrote the 1980 letter.