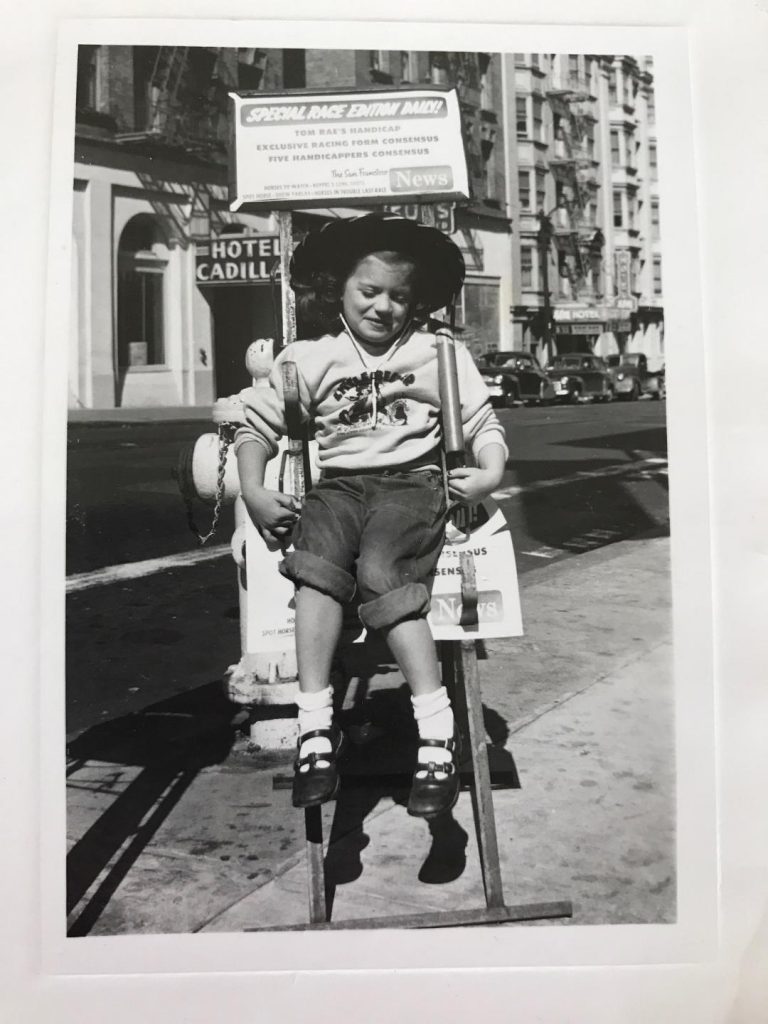 Barbara Badger grew up in Tenderloin

What the Tenderloin Once Was—And Can Be Again

The Tenderloin was long among San Francisco’s—and America’s– most successful neighborhoods. But as I describe in The Tenderloin: Sex, Crime and Resistance in the Heart of San Francisco, City Hall fought the neighborhood’s success. By the early 1960’s it transformed the Tenderloin into a containment zone for illegal activities, paving the way for the current crisis.

2020 should have brought a major Tenderloin breakthrough. But COVID19 and City Hall had other plans. Mayor Breed seems locked into a vision of the neighborhood as irrevocably troubled; she does not perceive the Tenderloin as filled with working families, mom and pop immigrant business owners, and longtime residents committed to community improvement.

Mayor Breed is too young to have experienced the Tenderloin’s safe, healthy and prosperous days. The decades before City Hall began transforming the neighborhood into a containment zone.

I wish the mayor could talk with Barbara Badger. Badger spent her childhood in a studio apartment at 375 Eddy Street, #34 in the heart of San Francisco’s Tenderloin neighborhood. She loved her time there.

I recently spoke with Badger about her experience. “The Tenderloin was a very safe neighborhood. I walked down the streets by myself and made friends with the oldtimers’ living there. They used to call me the ‘mayor of Eddy Street.’ I also got to know the people running the corner groceries. I particularly liked the Ringside under the Cadillac Hotel which had a tasty chocolate ice drink.”

The Tenderloin had few kids in those days. Barbara’s parents met in the Tenderloin and both worked in the community. Her Dad was a bartender at Leo’s cocktail lounge at 55 Taylor Street. Her mom was a waitress there. Like nearly all restaurant and bar workers in those days both were union members. Her Dad was in the Bartenders Union and her Mom was in the city’s Waitresses Union, the nation’s largest. Barbara recalls accompanying her mom to pay dues at the union’s former headquarters at 440 Ellis Street

Barbara regularly ate in local restaurants like Original Joe’s, Polo’s, the Lafayette Café and Leo’s. Regulations were less enforced back then. Barbara was allowed to dance on bar counters and get donations from customers!

Barbara recalls that “people dressed well in the Tenderloin in those days. Men wore nice pants, sport coats, and shoes were kept well shined.” I saw a lot of shoeshine stands when I came to the Tenderloin in 1980 so that practice continued.

Barbara’s parents were still working when Barbara came home from school. She recalls, “I never felt unsafe. I took the bus to 7th and Mission and then walked past the Hibernia bank and up Jones until I got to Eddy Street. She would spend afternoons with the “old men who sat in lobbies. They were my friends.”

Visiting relatives stayed at the Cadillac Hotel across the street. Barbara sent me photos of the Cadillac Hotel’s corner neon blade sign and the neon sign over the entrance (see above)—these may be the only photos in existence of signs that even the hotel’s longtime owners had not seen.

Although the 1950’s Tenderloin was thriving,  Barbara noticed that her school friends were not allowed to visit her. “I was looked upon as someone who lived on the wrong side of the tracks by my friends’ parents,” she told me. “Even then there was a stigma that it wasn’t a good neighborhood.” This stigma, long due to the Tenderloin’s underground economy, explains why history books on post-1907 San Francisco typically ignore the neighborhood.

“I was a happy child living at 375 Eddy St., Apt. 34, GR4-5982!  There were so many good people that lived in the Tenderloin during my childhood.  It was clean, everyone dressed nicely.  If you didn’t have money to cover your groceries, it was okay because they knew you would pay when you could.  If someone drank too much and couldn’t quite get home on your own someone would get you there.  I know because my Dad did both!  It was a happy neighborhood. The sun would shine on Eddy Street and residents (some pretty colorful and unique) would be out and about.  I remember the “cussing lady”, Officer Fitzgerald, “Chick” my Dad’s gambling buddy, Lou, the bartender at the Del Monte and the three brothers and butcher that owned the grocery store and butcher, Sam, Sol, Jerry and Henry,  the flower lady that had a large low lipped box with straps full of gardenia corsages.  The fragrance was beautiful.  I could go on and on as one memory brings on another and another.”

Barbara and her mom moved to the Mission in 1961. It was just in time. As I detail in my book, a Tenderloin neighborhood that did not have a single block of “slum” characteristics in the 1960 census began a rapid freefall within a few years of Barbara’s move. Its decline would continue until the late 1970’s with progress still uneven through today.

Barbara returned to the Tenderloin four years ago. She immediately saw it was a very different neighborhood.

What happened?  The short answer is that until Mayor Ed Lee took office in 2011, City Hall either failed to prioritize the neighborhood’s economic revitalization or made street conditions worse. City policies toward the Tenderloin have long amounted to the social equivalent of a wrecking ball.

Why Mayor Breed sees the Tenderloin’s future as a containment zone rather than a safe and healthy neighborhood of restaurants, bars, entertainment venues is a mystery. But Barbara Badger’s story shows what the Tenderloin once was, and with the mayor’s support can still become.