The Tenderloin Strikes Back 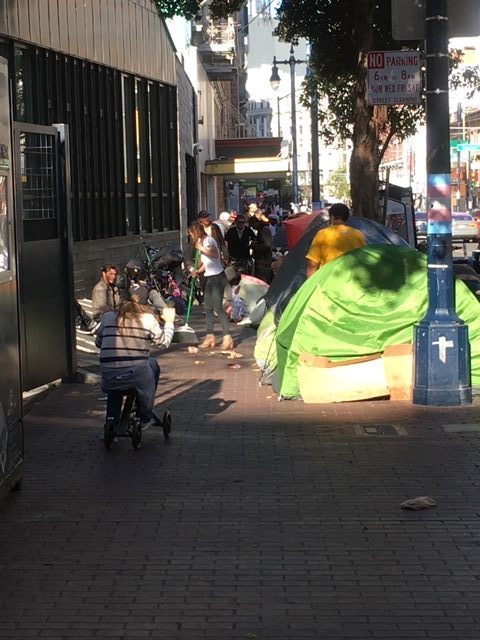 City Hall’s refusal to enforce social distancing in the Tenderloin answers my question. San Francisco will not provide the Tenderloin “with the safe environment other neighborhoods take for granted” until a court orders it to do so.

Mayor Lee took office in 2011 offering a dramatic new vision for the Tenderloin. Lee foresaw a neighborhood revival led by new housing, restaurants, and cultural facilities. He sought to end City Hall’s viewing the Tenderloin as a containment zone for activities banned in other neighborhoods.

Mayor Lee convinced business owners and housing developers on the neighborhood’s positive future. Thanks to the mayor’s advocacy the Tenderloin saw more new economic investment in Lee’s first five years than it saw in the preceding fifty.

When problems with drug dealing emerged in 2017, Lee convened a meeting of Tenderloin stakeholders at the Turtle Tower restaurant to discuss the problem. The Mayor said he was embarrassed by what he saw happening only a block away. He told the top police brass at the meeting that he wanted to see action immediately. (Lee regularly sought input from Tenderloin folks. I’m unaware that Mayor Breed has ever held a Tenderloin stakeholders meeting).

Three months later Lee died. Everyone I knew in the Tenderloin assumed that his vision would continue, since Lee had already done the hard work of getting people to believe in a new vision for the Tenderloin.

But everyone was wrong.

As I wrote in my February 23 op-ed, 2019 was the worst year for Tenderloin drug dealing since the pre-Ed Lee era. The Tenderloin often had 190 daily tents on its sidewalks and more open drug use than ever before.

Even before the pandemic the city signaled that it would allow the unhoused to turn Tenderloin sidewalks into campgrounds but aggressively prevent such activities in other neighborhoods.

I was hopeful when 2020 began that various projects would jump start the Tenderloin’s revival . But I foresaw problems: “Yet the city still allows tents to block sidewalks 24 hours a day when this would never be allowed in the city’s   gentrified neighborhoods. These round the clock tents create a protected area to use and sell drugs, and they leave a disproportionate amount of trash. With so much new investment coming into the Tenderloin, let’s hope that 2020 finally brings residents, small businesses, workers and property owners the sidewalk safety they deserve.”

But 2020 has brought the opposite. Mayor Breed responded to COVID19 by doubling down on treating the Tenderloin as a containment zone.

The mayor’s inaction for over seven weeks speaks volumes. So does her refusal to justify a policy that puts 20,000 Tenderloin residents and local workers at risk. The mayor provided a detailed explanation of her rejection of the Board of Supervisor’s measure to place 8000 of the unhoused in hotels; but she has never explained why the city is free to violate social distancing guidelines in the Tenderloin.

Breed’s support for camping on Tenderloin sidewalks reflects official city policy, now and post-pandemic. As  Willie Brown wrote in his April 18, San Francisco Chronicle column, “I got another look at the future when I rode through the Tenderloin. The place has become a tent city, with scores of homeless people “sheltering in place” along the sidewalks. As The Chronicle has reported, many of them do not appear to be 6 feet apart. The question is, will the city make them move once the coronavirus passes? I don’t think so.” (emphasis added).

Hastings to the Rescue

Hastings’ support for the future of the Tenderloin would have been unimaginable when I attended the school. Famously described by Warren Hinckle as “The Law School That Ate the Tenderloin,” Hastings was known in the Tenderloin in the 1970’s and 80’s for evicting tenants and demolishing two SROs.

When I helped open the Tenderloin Housing Clinic in 1980, the Hastings Dean told me that what we were doing was as destructive as practicing medicine without a license. In 2002 I was even arrested and accused of inciting a riot at the Hasting Board meeting where an 850-space parking garage was approved; I describe what happened afterwards in The Activist’s Handbook.

Yet Hastings went on to transform itself into a key Tenderloin partner. Much of the credit goes to CFO David Seward, who has long been active in the neighborhood. But Dean David Faigman has also become an outstanding community ally. At yesterday’s media event Faigman eloquently described the Tenderloin  in terms that would make all alumni proud. It’s rare for large public institutions to so closely align with neighborhood interests but Hastings Law School has done precisely that in the Tenderloin.

City Hall vs. The Tenderloin

I describe in my book, The Tenderloin: Sex, Crime and Resistance in the Heart of San Francisco, how for the past 100 years City Hall has regularly fought to keep down the Tenderloin.We thought those days were gone with Mayor Lee’s strong support; we were wrong. As a result, a neighborhood with a history of resistance must again fight for basic health and safety protections readily granted to other neighborhoods.

I have worked with many people over my forty years in the Tenderloin. Some gave the best years of their lives to improving the neighborhood. Mayor Breed should not let their work be for nothing.