The Ten Most Memorable Events of 2010 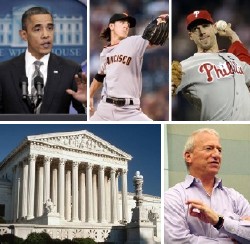 For those supporting greater social and economic fairness in the United States, 2010 holds few positive memories. Those able to divert their focus from politics to sports are still basking in the San Francisco Giants first local World Series win, and the victory parade reminded many of why they love the Bay Area. Otherwise, the most memorable events of 2010 were not positive. President Obama betrayed his progressive base and campaign promises, and touted a “compromise” that extended the Bush tax breaks for millionaires. This sets the stage for huge cuts in popular domestic programs in next year’s budget to pay for it. 2010 also saw Andy Stern leave SEIU, the demise of bookstores and video stores, the BP oil spill, Citizens United and more. Here’s my top ten list.

Let’s begin with the good memories: the Giants finally winning a World Series in San Francisco after 52 years. Here are my two favorite among many:

If sports reflect society, why were historic World Series victories by the Red Sox in 2004 and the Giants in 2010 soon followed by national election results strongly opposed by local voters?

Massachusetts Senator and Democratic presidential nominee John Kerry failed to politically benefit from the Red Sox win – and while many Giants fans particularly enjoyed beating a Rangers fan base that gave public ovations for the Bushes and GW’s ceremonial first pitch before Game 3, Republicans did quite well a few days later.

I found Game 1 of the World Series particularly memorable, because I had to attend the Chinatown Community Development Center annual dinner that night and so watched the game with a large and boisterous crowd on a huge flat screen television at City Hall. I never anticipated watching a sporting event at such location; nor have I ever seen fans in the stadium go crazier than when cool Tim Lincecum defeated the supposedly unbeatable Cliff Lee.

Renteria’s home run will forever stick with me because as I watched the ball leave the bat and head for the stands, I knew that nothing would stop the Giants from winning their first San Francisco World Series.

This event will prove memorable because it conclusively revealed the disconnect between candidate Barack Obama – a fighter for the “Change We Can Believe In,” – and a President now defended as being better than John McCain.

The President’s eager acceptance of tax breaks for millionaires, his touting of “compromise” as the best strategy for social change (Obama needs to re-read the history of the civil rights movement, or of slavery for that matter), and his acceptance of the discredited Republican view of tax cuts for the wealthy as “economic stimulus” confirmed that President Obama would not be the fighter for real change that he promised voters.

Obama defenders argue he is better than McCain (no doubt!), or that he never campaigned as a progressive (I don’t recall campaign speeches where he said that compromising core ideals, not standing up for principle, would bring change). It is no accident that he has formed a tight bond with former adversary Bill Clinton, whose values and political approach Obama is adopting.

Nor is it an accident that Obama’s capitulation to wealthy interests has brought him the most favorable media coverage of his presidency, with even FOX News holding back on attacks.

Obama Press Secretary Robert Gibbs’ August 10 condemnation of “the professional left” will prove memorable, because it confirmed suspicions that Obama had come to detest his progressive base and resented its criticism. As I wrote at the time, “many seasoned activists thought it would be different under President Obama. Gibbs’ comments confirm they were wrong.”

In case anyone needed further confirmation, see Obama’s scornful attack on those promoting a health care “public option” – issued without prompting in connection to his defense of his tax cut deal. Obama claimed that people were attacking the bill over a provision that would “at most affect two million people.” The President appears to have forgotten his own public claims that the public option would bring down health care expenses for most of the thirty to forty million people impacted by the new law.

Andy Stern’s sudden April 2010 resignation as President of SEIU is memorable for what it says about both SEIU and the nation’s labor movement.

For over a decade, Stern was the traditional media’s leading spokesperson for the labor movement. The media and many academics saw Stern as a visionary, and SEIU’s rapid growth appeared to confirm Stern’s insistence that he knew best how to expand union power.

Central to Stern’s strategy was the belief that dramatic labor union growth required political change, rather than the often painstaking organizing of new workers. But after SEIU invested upwards of $80 million in the 2008 elections, and secured a publicly pro-union President and Democratic congressional majorities, Stern got no action on SEIU’s top legislative priorities of labor law reform and comprehensive immigration reform.

Rumors abound as to why Stern left his post so suddenly, but don’t dismiss that he knew by April 2010 that his grand vision for revitalizing the labor movement by legislative and political change had failed. And 2010 will be remembered not only for the failure of SEIU’s growth strategy, but as the year organized labor missed its best – and perhaps last – opportunity for meaningful growth.

Most will remember this disaster for the daily photos of an oil leak for which our highly technological world had no quick solution. But it should also be remembered for exposing President Obama’s continued inability to control the media narrative.

Instead of Obama using the event to highlight oil company greed and the dangers of Bush Administration deregulation, he allowed his Administration to be put on the defensive for failing to find a prompt solution. The President of the United States has the biggest bully pulpit of all, but the BP spill showed better than any other event that Obama does not know how to effectively exercise power.

7. The Impending Death of New Bookstores

Remember when activists fought to save independent bookstores from chain store predators? In 2010, even Borders and Barnes & Noble are on life-support.

Despite closing 209 stores in the past year, Border’s December 2010 financial report was “dismal.” Barnes & Noble has put itself up for sale, with insiders believing its future hinges on Christmas sales of its Nook reader – the Nook, like the Kindle, also shifts sales away from bookstores.

While used bookstores have survived, 2010 will be remembered as the year in which stores exclusively selling new books began disappearing from U.S. cities. And this means fewer community spaces, and fewer opportunities to discover non- bestsellers.

8. The Demise of Video Stores

If video killed the radio star (as MTV’s first video announced), then Netflix, Redbox and streaming movies are killing video stores. Berkeley’s renowned Reel Video bit the dust in 2010 (it was part of the 760-store closure by parent Hollywood Video), and video stores nationwide are closing at a dramatic rate.

Like bookstores, the loss of video stores reduces opportunities for browsing. This is a culture-wide problem with widespread implications that will probably require a Malcolm Gladwell article and/or book, to get the attention it deserves.

While Senate Republicans use threatened filibusters to kill progressive legislation, Democratic Senators graciously allowed Clarence Thomas, John Roberts, Antonio Scalia and Samuel Alito to gain appointments to the Supreme Court. Thomas and Scalia have close ties to the Tea Party, while it was known prior to their appointments that Roberts and Alito were right-wing judicial activists.

Why then the surprise that the Supreme Court in Citizens United violated judicial precedent and reaches to throw out virtually every campaign finance restriction in federal races? This is a decision whose opening the door to corporate contributions to political races will be long remembered, and is just one of many in 2010 reflecting Wall Street and corporate control of the nation’s highest court.

Major political upheavals are always memorable, but the 2010 elections raise at least two important questions worth pondering over the holidays:

First, what does it say about the prospects for progressive national legislative change when tens of millions of Americans – particularly those under thirty – only vote in presidential elections? McCain would have defeated Obama if only the 2010 electorate had voted, and the fact that so many who were enthused in 2008 couldn’t bother to vote two years later speaks to more than Obama’s inadequacies.

Second, have progressives won sweeping gains in any election in United States history other than 1964 that was not held during an acute economic crisis? And does this not make it even more imperative for progressives to engage in the ongoing organizing that helps expand the electorate year in and year out?

Have a great holiday season, and let’s hope for more positive memories in 2011.