The Survivor by John F. Harris 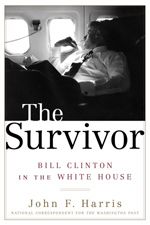 He was both the Comeback Kid and Slick Willy, and he was vilified with ferocity by both the left and right. But whatever one’s opinion of Bill Clinton, it’s impossible to deny his natural skills as a politician and leader. These skills-as well as all the complexities and contradictions of our forty-second president-are at the heart of John F. Harris’ consistently solid effort, The Survivor, a recollection of Clinton’s eight years in the White House.

Harris, a Washington Post correspondent, covered Clinton for six years of his presidency, and while there’s a shortage of truly groundbreaking or hard-hitting new information in the book, Harris always keeps things on an eminently readable even-keel. The book’s four-hundred plus pages fly by, and Harris has a natural flair for colloquial storytelling.

In Harris’ view, Clinton was a flawed but successful president, and a sort of nostalgic sadness hangs over the book, which is all the more pronounced when placed against America’s current context under the Bush regime.

Indeed, before hanging chads and weapons of mass destruction, there were dubiously placed cigars and the red-faced bluster of the meaning of “sexual relations.” Harris, to his credit, devotes only a few chapters to the Lewinsky affair and all its absurd infamy, and his simple retelling of the conjecture and hysteria around the whole mess allows the reader to not pass judgment so much as simply shake his or head in a mixture of sadness and discomfort.

Harris rightly conjures up a picture of Bill Clinton as one of us-perhaps one of the most singularly human and flawed chief executives there ever was. Like us, he’s prone to fits of anger and petulance, mobbed one moment by paralyzing insecurity while somehow forging ahead into a moment of greatness the next. Despite his many missteps and seismic shift of the Democratic Party to the center, Democrats are nowhere close to getting out of his shadow.

Harris portrays Clinton’s centrist triangulation as his greatest strength, but he spends too little time investigating the damage this has caused the Democratic Party over the long run. Harris spends a lot of time analyzing the notion that the White House “belonged” to the Republicans, thus fueling their intense hatred of Clinton, but Harris himself seems conflicted over his subject’s abounding conflictions and indecisions.

Perhaps it’s impossible not to be confused about a man who seemed to feed on confusion, but Harris rightly stays away from going after large revelations. Instead, the page is littered with small nuggets of insight that invoke large amounts of clarity and truth-something that glamour-crazed writers of today often overlook.

One such instance occurs when Harris discusses a bumbling early-term Clinton hitting a resonant stride after the Oklahoma City bombing. It’s a perfect illustration of the natural politician and the true sensor of human emotion in Clinton. He seizes the moment and pulls himself together in an instant, fighting off tears and delivering a moving statement to the country. This is sharply contrasted moments later by the oily consultant Dick Morris, who mentions the political advantages of the bombing in the hours after it occurred.

It’s a fitting metaphor when considered beside the immense capital George W. Bush has manipulated since 9/11. Indeed, the moments when Dick Morris is on the page are the most riveting and revolting. Harris astutely chronicles the enormous impact Morris had on rescuing Clinton’s campaign. He’s the true man in the shadows, surfacing like a shark’s fin when needed to scare everyone into action. (Harris notes that Morris was called simply “Charlie” for a time to keep most of the staff unaware of his influence.) As well, Harris’ parallels between Morris and Clinton’s reckless sexual appetites are spot on and particularly instructive.

Toward the end of the book, Harris notes that Clinton would say, “Al just needs to be himself,” referring to Al Gore’s struggles as a presidential candidate. Compared with Gore, Harris says that with Clinton “there was a narrow difference between the man at the podium and the man with his shoes off and feet up on Air Force One.” Gore, like most people who run for office, just didn’t have Clinton’s innate ease with the political spotlight.

Perhaps that’s what is at heart of The Survivor. For all his flaws, Bill Clinton was, on the surface, one of the most translucent presidents in recent memory. Which of course is a contradiction in itself when one thinks of the Lewinsky affair. Still, compared to the current administration, it fades into what it will be remembered for-an embarrassing private matter blown into a People magazine article. With the current administration still in office, this makes The Survivor a compelling and informative read, a flashback only a few years in the making that almost feels like waking from a bad dream.