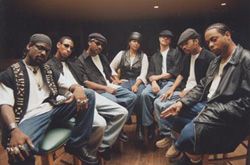 It has been over a year since the demise of one of the Bay Area’s brightest hip-hop acts, known as the Subterraneanz. Founded by three brothers, Besi, Tranque and Hypno, and their prolific cousin, LCJ, the Subterraneanz were fleshed out by the sultry Lokana Djas and MC Louie Da Saint. With the younger Hypno spinning discs and playing samples, and the elder Besi’s keyboards and political lyrics paving the way for the rap stylings of Tranque and LCJ, this family chemistry made for quite the show. Although the group has gone their separate ways, their solo efforts are indeed promising as the latest works of LCJ can attest.

Originally from Roxbury, Massachusetts, the group formerly known as the Exile Society, began performing as a rap act in 1988, and in 1995, moved to Oakland. The Exile Society then began the first of what would become a succession of European tours as support for the likes of A Tribe Called Quest, Arrested Development, the Sugarhill Gang, and the Pharcyde. While visiting Austria on their second European tour, they met the mighty Schonheitsfehler, pioneers of German-language rap and the first Austrian hip hop group to put down wax.

The Exile Society have been tapped into the Vienna scene ever since, returning to Viennese clubs and hip hop radio broadcasts in ’98 and securing a spot on Schonheitsfehler’s collaboration comp Teil 3 vom Ei. After their 1998 tour, vocalist Lokana Djas and MC Louie Da Saint joined the line-up and Exile Society ultimately became the Subterraneanz. One reviewer once opined that “the addition of Djas in particular, brought the band’s innate soul to the surface of their knockin’, drum-heavy groove, reminiscent of the phat-beats-and-harmony steelo of groups like the Pharcyde, Jurassic 5, and down-for-my-dogs divas like Mary J. Blige.”

Bay Area icon Kevvy Kev had featured the group on his Stanford based radio program, and their unique sound and messages of empowerment, placed the New England expatriates firmly in the rich musical tradition of Oakland.

Since their break-up, LCJ informs me that he has been working on his latest solo effort, (http://www.kevvykev.com/206.mp3), and continues to perform in the company of some of the Bay Area’s best acts, Planet Asia, The All Purpose Djs, Rasco, Slump Lordz,The Delinquent Monastery, Sol Rebelz, and Muse 10, at Oakland’s 2232 MLK club. 2232 MLK, is a new performing arts center and exhibition space that exists to enhance the cultural and artistic vitality of the San Francisco Bay Area, and promotes, produces and hosts youth arts and educational programs, theatrical productions, spoken word, poetry, dance performances, live music, film festivals, community gatherings and visual art exhibitions.

Success in the world of popular music today is often fleeting. The plethora of reality programs seems to have taken over, adding to a “dumbing-down” of what we have come to expect. Actors and actresses have lamented them, and in the music business it is no different. Shows like P. Diddy/Puff Daddy/Sean Combs’ “Making the Band” series, with a focus on the young, unprofessional and moderately talented, to the world of “American Idol”, where even the talent-less William Hung can succeed, is a sad commentary on what the American music landscape has become. It’s never ending focus on youth, and the bottom line, money, has made it virtually impossible for all but the luckiest to survive.

In the face of that juggernaut, The Subterraneanz continued to rap about the real world of crime, poverty, politics, of love and war, and they did it with a lot more style and grace than someone’s “idea” of a band. Ultimately, their need for survival deemed they continue as soloists, and the Subterraneanz were no more.

The British guitarist Robert Fripp once said that there were “four divisions of bands.” The first division featured bands that had all the money, the talent and the equipment, to take risks, to change the status quo and through music, to make us all more aware. The second division also had all the money, etc., (Michael Jackson, Madonna, Brittany.), but did nothing to change anything, and kept the machine well oiled. The third division was like the first, but had no money, and the fourth, (cover bands), also had no money, but did nothing except to perpetuate the machine.

The Exile Society/Subterraneanz were truly a great third division group, and their outspoken lyrics and honest assessment of life as Black Americans, made even their staunchest critics think twice. I am hoping they will return one day, and share their vision of better days, while reminding us at the same time, as James Baldwin once did, that “God gave Noah the rainbow sign, no more water, fire, next time.”

E. “Doc” Smith is a musician and recording engineer who has worked with the likes of Brian Eno, Madonna, Warren Zevon, Mickey Hart, Jimmy Cliff, and Steel Pulse among others. He is also the inventor of the musical instrument, the Drummstick. He can be reached via drummstick@earthlink.net