The State Shouldn’t Marry Anyone 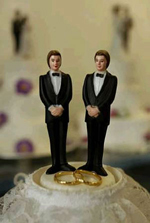 It looks like another gay marriage battle is heating up in California. Though the State Supreme Court recently struck down any impediment to same-sex nuptials, right-wing Christians have qualified a measure for the ballot that defines marriage as strictly between a man and a woman. Don’t they ever give up?

Despite the upcoming November proposition, gay marriages may resume in San Francisco City Hall as early as 5pm on June 16, the exact moment the Court’s decision becomes final. San Francisco Mayor Gavin Newsom says the county clerk’s office will remain open until 8pm that night, and every night thereafter, to accommodate couples anxious to tie the knot.

At a time when working- and middle-class queers in San Francisco, like everyone else in this country, desperately need affordable housing, universal health care and a living wage, it is sad that the burning issue of the LGBT community is the right to marry.

Of course, I support the right of queers to walk down the aisle. I may not be the marrying kind, but many gays are, so as long as the institution exists, we shouldn’t be excluded from it. There are certainly a lot of privileges and rights that come along with marriage, such as healthcare benefits, visitation rights, and tax breaks.

The question for me is not why don’t gay couples have those rights, but rather why doesn’t everyone? Instead of fighting to create a privileged class within our community, why aren’t we demanding that everyone have the same rights?

I oppose all marriage. Pure and simple. The state has no business sanctioning anyone’s union and blessing it with hundreds of privileges. Marriage is a dinosaur, a leftover of an age when wives and children were seen as possessions of the man of the household. In fact, the definition of the Latin “familius” (from which comes our word “family”) originally meant a man’s slaves. It was later expanded to include all of his “belongings,” among them his wife and kids.

In many times and in many cultures, marriages were arranged. In some places they still are. Love didn’t enter into the equation. Our Hallmark version of marriage as eternal love and bliss is a much more recent invention.

Obviously, it’s not what it’s cracked up to be. In the U.S. half of all marriages end in divorce. It’s even higher in California. When it really comes down to it, marriage is an institution that doesn’t work well for heterosexuals. Why do we think it will work better for queers?

In an ideal world, the state would not interfere with the sexual lives of its citizens. People would choose their partners and any ceremonies they want to mark those relationships. No one would receive any compensation or benefits from being in a relationship as opposed to being single. Everyone, including kids, would be covered with universal healthcare.

Unfortunately, that world is a long way off.