The State of the Democrats 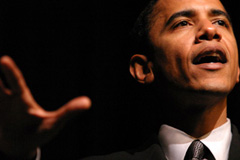 On the eve of the Democratic Convention, the media are scrambling to explain how this gathering differs from its predecessors. The most common analysis is that forces outside the Democratic Party— such as MoveOn, America Coming Together, and America Votes— now rival if not exceed the Party’s power. Another view emphasizes how the Internet and political blogs like DailyKos.com have reduced the once awesome power of the three national television networks to interpret convention events. But the media has missed the biggest difference between what will take place in Boston this week and all prior conventions: never before have locally-oriented grassroots activists been at the center of a national presidential campaign.

In my book Reclaiming America I noted that America’s best and brightest activists were largely working on local issues. This left progressives outmaneuvered and understaffed in the national struggles that increasingly impacted our neighborhoods and communities.

Labor and environmental activists began changing this dynamic in the late 1990’s, and local housing activists in 2000 were rapidly building a national affordable housing campaign. But most activists did not view the 2000 presidential campaign as their top work priority, and many did not work on the campaign at all.

This has changed for 2004, and this shift is the real “new” development that surrounds the Democratic Convention.

For the first time, thousands of activists whose day to day work is locally-oriented are putting their primary focus on a national presidential campaign.

We do not see this shift in activists’ work focus in the San Francisco Bay Area, because California is not a swing state. But if you talk to grassroots activists across the Midwest, in Pennsylvania, Florida, Oregon, and Nevada, there is only one item on their plate through November —- securing their state for the Democrats.

Matt Bai’s cover story in yesterday’s New York Times magazine (“Wiring the Vast Left-Wing Conspiracy”) argued that this convention was different because a group of wealthy Democrats were funding alternative power sources to the Democratic Party. But what Bai’s story entirely missed-and he is among many journalists to have done so-is that money alone does not attract our best and brightest organizing talent to work on presidential campaigns.

Californians know this fact well from last year’s recall election. Embattled Governor Gray Davis had funds to pay everyone who wanted to organize for his campaign, but few progressives had the heart for it.

The 2004 presidential campaign is different.

Wade Rathke, founder and national coordinator for ACORN, convened an organizer’s forum in Chicago this past April to discuss the “political methodology” underlying the 2004 election. In his notes on the event Rathke observed that labor activists saw the 2004 national election as a “do or die” struggle. My own discussions with staff of environmental and local economic justice groups across the country echoed this feeling.

As Rathke puts it, over the past 30 years organizers tended to see presidential campaigns as a “distraction.” Such elections were “easily ignored phenomena” that went by “almost unnoticed between Labor Day and Thanksgiving.”

We can look back on prior elections where the stakes also seemed to be high, but as much as progressives despised Ronald Reagan, activists around the country did not drop everything to work against his election or re-election in 1980 and 84. But activists are putting everything on hold to defeat George W. Bush in November.

Groups that once prided themselves on their disdain for electoral politics are now busy registering voters and working on strategies to increase turnout in low-income communities.

As many have pointed out, George Bush has fulfilled his pledge to be a unifier. He has brought local, state and nationally-focused organizers together in an unprecedented display of inter-organizational coherence that few thought possible.

Forget turf fights and debates about who gets the credit—for activists across America, its all about beating Bush.

Is this a one-time phenomena? The Times’ Bai thinks so. His opening paragraph argues that once Bush is gone the Democrats will lack direction and go back fighting with each other.

But the assumption that activists will go back to strictly local organizing after November 2004 is likely mistaken. Once the Democratic Party and liberal funders see investing in grassroots organizing as a winning formula, activists will be given the resources to work on future state and national campaigns.

And the power these organizers’ constituencies wield over the Party’s priorities will steadily grow.

The chief progressive critique of the Democratic Party-that it uses activists’ energy without delivering to the progressive base—was sustained by decades of television-dominated politics.

In 1988, the Democrats produced relatively few Dukakis-Bentsen buttons. I recall a Party official telling me that the Dukakis campaign felt buttons and bumper stickers were a waste of money, and that they preferred to spend all their resources on television ads.

Those days are gone for good. Door-to-door, face-to- face canvassing has replaced television ads as the central strategy for winning swing states.

Howard Dean had the right strategy—but he lacked the organizing talent necessary to pull it off.

The best organizing roster ever assembled for a presidential campaign is on board for John Kerry, and it is these activists who will determine the future of the Democratic Party both in November 2004 and in the future.

Enjoy the convention and be sure to catch Barack Obama’s keynote speech Tuesday night.