The Shooting Stage, Confessions of a Mormon 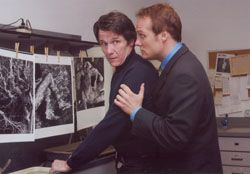 Shooting Stage has taken a cue from the controversy and continues the debate on art. Is it art or obscenity? Whether it’s Janet Jackson’s breast or a boy in a dress, as in the case of “Shooting Stage – there will always be the one’s who scream OBCENITY when they see a piece of flesh. They are the same people who cover up nude statues and the same people who would like to see everyone covered up from head to toe.

In this story Len is a photographer who has taken some pictures of a young man. The boy is wearing a dress. There is nothing sexual about the photo. The young man liked to wear a dress at that time. To some it is art. To others it screams Pedophile. Something that Len is not. At least not openly. The picture ends up in an Art Gallery – and the furor and witch hunting begin.

There is more to this story than the troubles of an artist. Take Elliot for instance. He is the Gay son of one of Len’s childhood friends. Elliot is also interested in photography, especially the beauty of the Trumpet Swans.

Elliot is a person who you feel for. He is bullied in High School and he works in a drag on the stage at a gay bar on weekends. Elliot’s life is tragic. You just know that something frightening is going to happen to him. The clue is his attraction to the straight guy at school, who leads Elliott on. Of course, when he gets what he wants – like all good locker room boys, he pretends “That Nothing Happened.”

There are other revealing layers in this play. Elliott’s father has a past that meets up with him in real time. Through all of this turmoil – Elliott gets his gun in more ways than one, and the high school bully has secrets – secrets involving money and Elliott’s father.

A Swan flies away injured, but returns. I know it sounds like a lot in one play – and it is. At first this story is confusing, but like a puzzle it falls into place.

Horrifying and beautiful at the same time, The Shooting Stage with all its complexities gives you much to think about and remember.

THE ACTORS: Catz Forsman (Len), Woody Taft (Malcolm), Grey Ayers (Elliot), Brady M. Wollery (Derrick) and Patrick Alparone (Ivan) are all outstanding. They make the story real. It’s rare to find so much talent in one play. Well, your search is over. Dan Oliverio the director, has great insight and delivers taut performances from the actors.

The lighting design is so integral to the play — John Kelly will stun you with his magic. Ted Crimy’s sound design is certainly well-crafted and razor sharp. Michael Lewis MacLennan, the playwright has given us a play with endless things to think about.

RATING: THREE GLASSES OF CHAMPAGNE!!! A recipient of the Lee Hartgrave Fame award for best ensemble acting in a drama – 2005. At the NCTC Theater.


THE MORMON FILES: Robert Mapplethorpe was an artist who became famous for his artistic vision of Jesus submerged in Urine. The uproar was about fifteen years-ago.


He was a Boy Scout, a Mormon Missionary, a Husband and a Father. Then he was kicked out of the Mormon Church for confessing that he had sex with a man. He pursued a career in Show business, but didn’t quite make it as big as he wanted. Like all show people, he waited on tables. Someone told him that he could make more money by being a male escort. He did. He made lots of money and spent it faster than it came in. He lived hard, spent too much on lavish apartments and clothes – then of course, the lure of drugs took over his life.

It’s a smart ride that Steven Fales gives us. It’s a cleverly conceived and quick moving story of the life of a failed Mormon. But, as he says – “The only thing I miss about the Church now, is the singing. I used to love to sing.” And Fales does sing. He sings in the show, which helps to carry the story along and is a welcome break from time to time from just a monologue.

“Confessions” is based on the life of Steven Fales, who was once one of the shining clean cut faces in the Mormon Church. The play has been here before. Then, it was more somber – yet very interesting. In this new version Fales has loosened up more. Dare I Say – More Gay. For instance in a bar that he goes to frequently he says to men that cruise him.”You tell all the Girls that.” Not very Mormonesque of him is it?

Singing Mormons and the Voices of God. If you have ever wondered why singing is so big in most religions – Fales will clue you in. And like the DeVinci Code he will give you the combination to corporate religion code. He cracked it, and you should to.

So Fales goes from being a saintly Mormon to men behaving badly, and along the way crash landing at each stop. But he survived. He is doing what he wanted to – entertaining and performing around the country and getting critical praise. And with it all – he makes it devilishly funny, heartfelt and interesting. A DELICIOUS BLEND OF FUN AND RAUNCH.

RATING: THREE GLASSES OF CHAMPAGNE. A recipient of the Lee Hartgrave Fame Award for Best Solo Performance – 2005. At the New Conservatory Theater.

Not a good idea to miss these shows. Sharon McNight at The Plush Room. Her Betty, Betty, Bette show is pulling them in. At the Orpheum Theater – the advance buzz is that it is terrific. Our review is next week, where you always get the unfiltered buzz. Les Miz will be back at the Curran where it belongs. Actually – you don’t even have to enter the theater to see the misery. It’s right there in front of you on Geary Street. As good at the musical is, the real thing on the street is more distressing.

Mambo Italiano – will rock into the Golden Gate soon. It’s not Mary Poppins. “The Blue Dress” is a great solo show at NCTC. You still have a few days left to see it. What’s happening at Michael’s Lounge on Market? Beats me – never hear from them. Their P.R. guy – Bill Lanese has retreated back to Palm Springs. And what’s a Club without P.R.? You got it. Dead. Several Celebs live at the Fox Plaza. They don’t wish to be noted, but you see them on the stage and on T.V. Some are worried that when the building is sold (up for sale in two weeks) that the new owners will raise their rents. Nope. No can do. It’s a rent controlled building. So they cannot raise rents above what you are paying and they can’t eliminate the Apartments. Rumor is that they have spent a bunch of money on curb appeal and already have some offers. THIS IS A SCOOP DE JOUR!