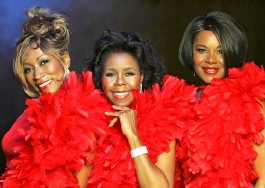 THE SHIRELLES AT THE RRAZZ ROOM – I’M HOOKED!

The Shirelles are probably the best girl group around — their intonation, timing and sweet delivery of the fantastic repertory of the tunes of yesteryear put me on that high speed train we would all like to see. The magnificent tunes rap-around the arrangements. Everyone can hear every word. That’s right – it puts you in front row center.

Beverly Lee is one of the founders of the group. She has been weaving her musical magic in crisp, sparkling 3-D for 52 years. She goes from slow and mellow to upbeats that will make your socks roll up and down. Lee is determined to keep the spirit of the great musical sounds and all those memories. “We will always have our memories” – Beverly Lee said. “Unlike the music today that no one will remember what they were doing when they heard it.”

I agree. Almost all the new music is tripe. There isn’t a story in the music today. All the new stuff is just one lyric that is sung over and over again. I wouldn’t call it music. It’s more like torture.

“Mama Said” is a high-flying hoot. It starts out with fun cute chitchat that gets your blood moving. I loved it – every movement every pause – every snicker is just so incredible – WOW! Now you listen to Mama.

“I Met Him on a Sunday” – We hope to meet on a Sunday – but it turns out to be Dreams of Falling out of love.” – It’s still buzzing around in my head. I haven’t forgotten a second of it. See what those Shirelles have done to me.

Then there is the Sassy “Tonight’s the Night.” – a lyric…”You say you gonna miss me tonight? – Well, it looks like he’s not gonna turn up tonight! The tune is first rate in the hands of the Fab Four Shirelles.

There are several more songs in the show that will just sweep you up into the moment. In 1962 they wrote “Soldier Boy”. It’s just as pertinent now as it was then. Boys are still coming home from wars. “Soldier Boy” was a huge hit – and many other groups covered the song. But – The Shirelles version stayed on top. As they sang the song – they asked if there were any Soldiers in the audience. Three men went up on the stage. The Shirelles sang the song and danced with them. This was such a touching moment that many in the audience were tearing up.

At the beginning of the show the STARS all wore Yellow Gowns with sparkles on it. They all traded being the lead singer. One said: “We’ve been with Beverly for 22 years. She was an Original of the Group and she has been performing for 52 years.” She looks fantastic, and is in great voice and still has that terrific body.

Near the end of the set, the other two girls took over the stage for a number, and the audience kept applauding for Beverly Lee to come back out on the stage. She not only sang the Pop Rock classic “Love Train”, she changed into a shimmering showgirl sexy dress. Boy – did she ever glitter and kick those legs up. Yes, she does have great legs. As she said – “I may be senile – but I’m not that senile!” She jokes, of course. I might ad. She can shimmy and shake those memories for me anytime.

THE RAPTUROUS AND REMARKABLE STARS ARE: Beverly Lee – Spann and Ane

There is nothing better than a live performance. And this show has more life in it than anything else I’ve seen this year.

AT THE RRAZZ ROOM.

ACTOR, SINGER GALLAGHER is a stage and movie actor. He played the part of Danny Zuko in a touring production of Broadway’s Grease and he was in that great movie “American Beauty”, plus “The Idolmaker”, and “Sex, Lies and Videotape” – and dozens of other productions.

He was quoted as saying – “Everyone seems to mention my eyebrows (They are very bushy.) Gallagher also has plump lips. Nothing attracts girls like the combination of sexy lips and bushy eyebrows. Lucky him.

Gallagher appeared with Glenn Close in Stoppard’s “The real Thing”. He achieved more fame in Steve Soderbergh’s “Sex, Lies, and Videotape” (1989). He was also Sky Masterson in the ’92 Broadway Revival of Guys and Dolls.

He also released an Album (7 days in Memphis in 2005) on the Sony BMG label. It includes the studio recording of “Don’t Give Up On Me”. There also is a video of his single “Still I Long For Your Kiss”.

Gallagher is making his West Coast premiere of his acclaimed cabaret performance of “Songs and Stories”. The talented veteran of stage, screen and film brings out many songs from the Great American Songbook as well as those wonderful Broadway shows and experiences in his career. That’s why it titled “SONGS and STORIES.

Bay Area Cabaret Presents this one night evening, only at the Famed Fairmont Hotel Venetian Room at 950 Mason Street, atop Nob Hill. The date and time: Saturday, October 22, 20ll. Tickets are “Hot” and going fast.

Gallagher weaves his stories and songs effortlessly. Believe me – this sleek evening is likely to linger with you long after you’ve left the magic of the Venetian Room.