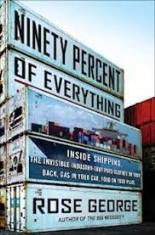 Ninety Percent of Everything, Rose George’s new book about the international shipping industry, gives new importance to “buy local” campaigns. Regardless whether our coffee is fair trade or the factories that sew our t-shirts adhere to international labor protocols, those goods, and ninety percent of everything we use, travel on large cargo ships owned by the international 1%. Ninety Percent of Everything describes the modern shipping industry and documents its terrible labor practices, pollution of the oceans and atmosphere, killing of sea life, and ability to avoid regulation in ways that big banks have never imagined possible.

As part of her research for the book, George rode as a “supernumerary” on a Maersk container ship traveling from Southern England to Singapore. Before I read George’s book, I thought the crew on cargo ships were treated reasonably well in terms of food, recreation and other onboard amenities.

I was wrong. Even though the ship that George rides on isn’t one of the worst (or she wouldn’t have been allowed onboard), the food is terrible and scant, and the third world crew members have no internet, no phone service, and no recreation save a few old dvd movies to watch again and again. Still, these terrible conditions pale in comparison to those on lesser quality ships which pose the threat of sinking at sea without adequate lifeboats or safety gear.

George notes that a British academic compared the conditions for crew on modern cargo ships with prison conditions and found that the prisons compared favorably in terms leisure, recreation, communication with the outside world, safety and food quality.

Adding insult to the injury of living in prison-like conditions, shipping crews are routinely not paid the wages they are due at the end of a voyage. George explains that the International Transport Workers Federation (ITF), a global union representing four million seafarers, tries to address serious labor and human rights abuses on ships, but is thwarted by the elusive nature of the international business, including the “convenience” flagging of most vessels in countries that have no worker protections.

International shipping companies are no friendlier to the planet than they are to their workers. The industry, which has grown fourfold since 1970 in the number of ships at sea, is a major source of global pollution. While ship transport is greener than planes and trucks in terms of CO2 emissions per mile, shipping is such an enormous industry that it emits nearly 4 % all greenhouses gases–more atmospheric pollution than the entire country of Germany. Ships also routinely lose containers and their contents into the ocean, and spill highly toxic, cheap bunker fuel into pristine ocean waters.

Saddest of all in terms of shipping’s environmental harms are George’s descriptions of whales being bashed, battered, gashed, pinioned and struck by container ships. The ships are so large that at times the crew is unaware that they have struck a giant sea creature. At other times, the crew spots a whale in the ship’s path and decides to strike it rather than risk delayed arrival of goods in port.

George’s voyage included passage through high-risk pirate zones off the coast of Somalia. The book provides a vivid description of rampant piracy—544 seafarers were being held hostage with various ships at the time George wrote the book. The description is chilling in terms of the brutality of the pirates, but also illuminating about their lives. Somali pirates are not the lovable rogues we see in Disney movies, but George’s explanation of the dire poverty of Somalians and their negotiations for ransom with well-paid representatives of shipping moguls at least makes their actions understandable.

Indeed, George notes that the Harvard Business School chose Somali piracy as the best business model of the year in 2010 because of its high profit rate. That honor speaks volumes about the morality-free definition of “success” used by our business elites and helps explain why mega-rich ship owners shamelessly engage in brutal business practices that rival those of the Somali pirates.

George’s book does not offer much in the way of solutions. A fair trade advocate who was asked about assuring that fair trade goods are shipped in a fair manner bluntly responded that it would be impossible to do that. The solution that comes to mind after reading the book, and learning about the dark side of international shipping, is to “Buy Local.” Perhaps the second edition of George’s book could then be called “Eighty Percent of Everything.”