The Shattering of Progressive Unity 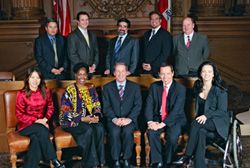 Four years ago, six new Supervisors joined incumbents Tom Ammiano and Mark Leno in creating a progressive Board majority. This majority quickly enacted land use reforms and new budget priorities, and won new limits on mayoral power. But today, the Board is far from progressive and a sense of common purpose has been replaced by internal strife. Jake McGoldrick has abandoned progressive politics, Gerardo Sandoval criticizes progressive constituencies, Sophie Maxwell votes against progressive interests without explanation, and Aaron Peskin maneuvers in vain to keep what he hoped would be a progressive majority in line. Unless activists begin holding politicians accountable, the situation will only get worse.

After last November’s elections, Supervisor Aaron Peskin sought to unify a seven Supervisor progressive bloc against Mayor Newsom and Supervisors Ma, Dufty, Alioto-Pier and Elsbernd. Last week’s debate over the MUNI fare hike clearly showed that this unity has been shattered and that the Board’s allegedly progressive majority is in complete disarray.

It wasn’t supposed to be this way.

After using progressive activism to beat back well-funded and mean-spirited attacks from downtown interests, Supervisors McGoldrick and Sandoval were free to vote their conscience despite their slightly more conservative districts. With Maxwell needing to vote progressively to avoid an electoral challenge from the left in 2006, it appeared that Board President Peskin would have six sure votes to fulfill his hopes for a progressive Board majority.

But this was not to be. Even prior to Peskin’s election as Board President, McGoldrick cut a backroom deal with the Mayor to slash millions in health and community services in mid-year budget cuts. He did this without any consultation with President Gonzalez or the Board or Chairs of the Budget or Finance Committee.

While McGoldrick opposed proposed funding cuts to the Convention and Visitor’s Bureau and the Opera, he supported cuts to public health nurses, mental health services, AIDS/HIV programs, and recreation centers.

Jake McGoldrick, one of the most personable and sincere people in local politics, is the number-one target this year for big business, landlords, and restaurant owners who don’t want to pay their workers a decent minimum wage – and Mayor Gavin Newsom.

Few suspected that McGoldrick would use his hard-won victory to align himself with the forces that tried to defeat him. McGoldrick’s about-face became complete when a fundraiser was recently given for him by BMWL, who manages campaigns serving the agenda of the Chamber of Commerce and other downtown interests.

In addition to shifting his political allegiances since November, McGoldrick has actively sought to undermine Supervisor Chris Daly. McGoldrick’s budget deal with the Mayor last December would have defunded one of Daly’s favorite District 6 programs, and McGoldrick has angered Daly by “swinging” the Budget Committee so that he, Ma, and Elsbernd are calling the shots.

McGoldrick’s interference with Daly’s effort to maintain a District 6 program seemed inexplicable at the time, and Jake subsequently apologized to Daly for his conduct. But subsequent actions by McGoldrick, culminating with his attacks on Daly during the MUNI fare hike, shows that his prior anti-Daly intervention was no accident.

McGoldrick needs to feel important. Having failed to become a leader of the left, and unable to usurp Peskin’s role as the Board’s consensus-builder, McGoldrick has staked out a new position to make him the center of attention: that of Mayor Newsom’s dealmaker and the Board’s “swing” vote. No longer aligned with the Board’s progressive forces, McGoldrick can “swing” the Board’s support for the Mayor’s agenda on the budget, MUNI fare hikes, transit policies in Golden Gate Park, and other issues.

McGoldrick’s attempt to divide the Board’s progressive forces goes beyond attacking Daly. He also seeks to drive a wedge between Peskin and Daly by his shifting the balance of power on the Budget Committee away from Daly and Ammiano. Peskin’s longtime support of McGoldrick, and his assertions that he can persuade Jake to do the right thing has left Daly and his backers questioning why Peskin allows McGoldrick to shift the Budget Committee to the right.

McGoldrick has even turned on his closest ally on the Board, Tom Ammiano. Although McGoldrick owes his entire political career to Ammiano’s backing of his 2000 campaign, the District 1 Supervisor recently introduced a resolution to praise former San Francisco Archibishop and vigorous gay marriage opponent William Levada on his acceptance of a new position at the Vatican.

I could understand Sean Elsbernd introducing such a resolution, but Jake McGoldrick? All this resolution will do is pit Ammiano and the gay and lesbian community against the organized Catholic community, a conflict that hurt the longtime Supervisor in his 1999 Mayor’s race and does nothing to advance progressive interests.

While McGoldrick does far more damage to progressive interests than his 2004 opponent Lillian Sing would have done had she been elected, the progressive activists who put him in office again remain quiet. Where are the protests against McGoldrick from the progressive “Our City” group that hit the streets for Jake?

Where is there any protest or demonstrations from any progressive activists in McGoldrick’s district? Do District 1 activists hibernate between elections, or do they not care about keeping politicians they elect accountable?

McGoldrick has yet to pay any political price for betraying his campaign promises to progressives, and now has a new group of political friends that does fundraisers for him and makes him feel right at home. If progressives in his district allow him to get away with this, they should give up working on candidate campaigns, as their unwillingness to hold their “allies” accountable only paves the way for future betrayals.

McGoldrick’s abandonment of progressive politics would still leave the Board with a shaky six vote progressive majority. But there are other problems as well.

Unlike McGoldrick, Gerardo Sandoval responded to the downtown attacks upon him last Fall by becoming a fire-breathing populist on the debate over mid-year budget cuts. Sandoval has not abandoned progressive politics; he just cannot give up his negative attitude toward progressives.

During the MUNI fare hike debate, Sandoval justified his vote to raise MUNI fares by repeating his often-made charge that progressives have never “been there” for him.

Contrary to his assertion, progressives worked hard to re-elect Sandoval. The problem is that with Matt Gonzalez gone Sandoval is isolated from fellow progressives, and feels no obligation to foster progressive unity on the Board.

Sophie Maxwell’s votes have been all over the map, as she voted for all of Mayor Brown’s appointees to the Planning Commission and Board of Appeals yet some see her as a “progressive” on land use issues. Maxwell votes with the Mayor and against progressive interests on almost every financial issue, ranging from the MUNI fare hike, the city budget, and the award of a tax break to the Republican bicycle race sponsor.

Maxwell rarely explains her rationale for voting on issues, and has typically followed the downtown line on economic and budget matters. Her loyalty to progressive unity on the Board is unclear, as she has railed against “white progressives” yet employs one as an aide.

Given the uncertain voting patterns of the above three Supervisors, Board President Peakin’s responsibility for the lack of a progressive Board majority is hard to assess. Peskin lost his leverage over McGoldrick’s vote following the latter’s re-election, has never had much influence with Sandoval, and does not impact Maxwell’s votes on citywide issues.

Daly, Ammiano and Mirkarimi constitute the progressive Board minority. Securing a six vote Board majority requires activists to demand accountability from the other Supervisors they helped elect.

Right-wing Republicans attack fellow Republican politicians when they stray even once from the party line; in contrast, San Francisco’s progressive activists act like electing a self-identified progressive is the goal, as if they are too busy planning the next campaign to pay attention to how these politicians are actually voting.