The Season’s Most Ridiculous Campaign Mailer 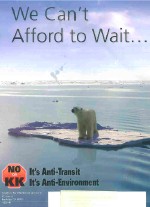 This political season has seen many deceptive local campaign mailers, with several attributing a sense of absolute power to San Francisco progressives that they only wish they had. But the most ridiculous and politically counter-productive mailer appeared in Berkeley, and was endorsed by one of my favorite groups—the Sierra Club. As the accompanying photo shows, the Sierra Club wants Berkeley voters to believe that a ballot initiative (Measure KK) that would require voter approval when parking is removed for bus lanes endangers our efforts to combat global warming. The Club also wants voters to believe that defeating Measure KK will help save polar bears, while a “yes” vote heads them toward extinction. Identifying supporters of Measure KK as joining Sarah Palin in opposing polar bears is not a sound strategy for building a movement, and almost mocks the importance of local climate change efforts by linking Measure KK to the polar bear’s plight.

I am a member, huge fan, and public cheerleader for the Sierra Club. My second book, Reclaiming America, highlights the Club’s 1996-97 campaign to strengthen the Clean Air Act, and its effectiveness at the national level is beyond dispute.

But local Sierra Club activists do not always share the strategic savvy of its national staff. And a good example of this can be found in the Sierra Club’s Northern Alameda County Chapter’s ill-conceived attacks on Berkeley’s Measure KK.

The ballot measure wanted to ensure that a Telegraph BRT lane could not be installed without a public vote. Because its proponents oppose such lanes in other locations as well, Measure KK covers bus lane changes anywhere in Berkeley that impact parking.

In my view, Measure KK’s expansion beyond Telegraph Avenue was a mistake. It enabled opponents to shift the debate from sound transit strategy to the question of whether holding elections over every BRT plan is too costly and administratively burdensome.

But the “No on KK” campaign was not content to rely on such arguments. Instead, it has linked Measure KK to the melting of the polar ice cap, to the peril of the polar bear as shown in the accompanying photo.

This reminds me of Republican efforts to blame the mortgage meltdown on ACORN, the Community Reinvestment Act and other government efforts to stop racial discrimination in lending. Or of John McCain’s view that much of the nation’s financial woes are attributable to excessive “earmarks.”

What is the purported link between Measure KK and the polar bear? According to the mailer, “With nearly 50% of greenhouse gas emissions coming from transportation, local improvements to transit can make a big difference in the fight against global warming.”

I agree. The underfunding and historically poor management of AC Transit has left East Bay residents heavily dependent on the automobile, and any “local improvements” that expand public transit should be supported.

But the 50% figure cited has absolutely nothing to do with subjecting BRT lanes to voter approval. In fact, the statistic appears to refer to all transportation including cars, and tells us nothing about the impact of changing bus routes on climate control.

It’s Palin and her oil industry allies, not Berkeley residents who support the right to vote on bus lanes, who pose the real threat to the polar bear. Rather than divide Berkeley residents over a false argument over global warming, the local Sierra Club chapter should be helping to unify local residents and communities to win the changes we need to preserve our world.