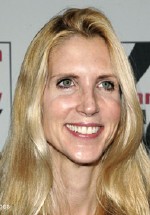 What could be more fun than a nasty cat fight between two right-wing leaders, especially when one of them is Ann Coulter, a columnist who attacks the “gay agenda” while claiming to be “the right wing Judy Garland?”

The fur started flying when Coulter, who uses “fag” as a putdown, accepted an invite to speak at next month’s “Homocon,” the convention of gay Republicans (yes, Virginia, there are queer GOPers) sponsored by a group calling itself GOProud. Joseph Farah, who publishes the ultra right WorldNetDaily, pitched a fit when he heard about Coulter’s plans, and cancelled her appearance at his upcoming event, charging that she is “legitimizing a group that is fighting for same-sex marriage and open homosexuality in the military.”

“Ultimately, as a matter of principle,” Farah continued, “it would not make sense for us to have Ann speak to a conference about ‘taking America back’ when she clearly does not recognize that the ideals to be espoused there simply do not include the radical and very ‘unconservative’ agenda represented by GOProud.” Radical agenda?

Coulter threw a hissy fit of her own and called Farah a “publicity whore” and a “swine.” The pot calling the kettle black. She also said that Farah’s group is a bunch of “fake Christians trying to get publicity.”

Coulter’s pandering to the Republican gay set seems to be part of a new moderate trend among the party that has traditionally made gay bashing a political rite of passage. Not only has Glenn Beck said he supports gay marriage (joining fellow GOPers Dick Cheney and Laura Bush), but now Ken Mehlman, George Bush’s campaign manager in 2004 and a former chair of the Republican National Committee, has come out of his conservative closet.

After years of working to elect politicians who courted right-wingers such as Farah and Coulter, Mehlman says he plans to become an advocate for gay marriage. He may even be attending Homocon.

“It has taken me 43 years to get comfortable with this part of my life,” Mehlman said. “Everybody has their own path to travel, their own journey, and…” Blah, blah, blah.

The fact remains that Mehlman was in a position to influence Republican politics at a time when the party used its constituents’ fear and loathing of homosexuality, gay rights and gay marriage to defeat liberal Democrats and to steer the country into one of its most tragic eight-year periods, a time when George Bush and his buddies eroded civil rights (via the Patriot Act), engaged us in two wars that have cost countless lives (on both sides) and three trillion dollars, and gave everything to the rich and nothing to the poor and working-class, leaving us with sky-high rates of homelessness, hunger and unemployment.

Mehlman’s reponse? “I can’t change the fact that I wasn’t in this place personally when I was in politics, and I genuinely regret it. It was very hard personally.” He asks that if people “can’t offer support, at least offer understanding.”

Coulter asks that I believe she’s not homophobic because she hangs out with gay Republicans and Mehlman wants me to show him “understanding,” even though he helped Bush and company destroy this country.