The Return of “Lemon” Socialism 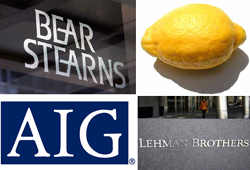 Jack Lemmon won an Oscar for Best Actor in Save the Tiger, a 1973 film in which he played Harry Stoner, an owner of a garment factory in Los Angeles. The business faced tough times, but Stoner felt that if the government could only give him a little break—like it did in the real world to save the giant weapons contractor Lockheed Corp—he could get by. But the message of the film is that the government does not step in to help “little guys” like Stoner—it saves its massive bailouts for the big fish like Bear Stearns or, this week, A.I.G. This used to be called “lemon socialism,” which described how the government would bail out or take over faltering private enterprises—i.e. ”lemons,” only to then have free market ideologues point to these businesses as examples of how government regulation hurts business. This “heads government loses, tails the private sector wins” economic agenda convinced millions of United States voters that government harmed rather than fostered economic growth. It also helped persuade voters that government was powerless to bolster the nation’s manufacturing sector, enshrining a false philosophy of “government shouldn’t pick winners and losers” that continues to this day.

Back in the 1970’s, activists used such phrases as “lemon” socialism, trickle-down economics, and “Pentagon capitalism” to describe the fraudulent aspects of “free-market” capitalism. We’ve had a great demonstration of all three policies during the Bush years, with the government takeover of failed free-market enterprises gathering most of the attention this year.

When Bear Stearns teetered on the brink of survival earlier this year, financial experts were almost unanimous in promoting U.S. government intervention. We were told that the world’s entire financial stability was at stake, and that if Bear went down, it would hurt millions of “little people.”

So the United States taxpayers bailed out Bear Stearns.

Then it came to Lehman Brothers. Since the Bush Administration was so insistent that Bear Stearns was the exception not the rule, the venerable financial firm was allowed to fail this week.

But A.I.G. was a different matter. The taxpayers bailed out the insurance giant with an $85 billion loan on Tuesday, because, as stated in today’s New York Times, the alternative was to “risk a potential catastrophe of unknown proportions.”

As Jon Stewart would say, you certainly don’t want to mess with that.

Ultimately, the arguments for saving A.I.G. paralleled those made earlier for Bear Stearns: the corporation was viewed as just too big to fail.

In light of the financial crises of 2008, many have wondered why the financial service class is staying politically loyal to the political administration whose policies caused this chaos. Well, these bailouts provide one obvious answer.

Corporate America knows it can espouse free market ideology when it suits its interests and then switch course when it comes time for a government bailout. Phil Gramm, John McCain’s chief economic advisor and the likely Secretary of Treasury in a McCain Administration, has long used government to pick winners and losers while claiming to advance a “free market” ideology.

“Winners” get government assistance to survive and thrive, while “losers” do not. Ant it is no coincidence that the current financial bailouts are occurring in the non-unionized financial services sector.

Since the 1970’s, when unionized auto, steel and other manufacturing industries asked for government assistance to get through tough times, the typical answers were (1) government can’t change the rules of the global economy and (2) business should not turn to government to solve its problems. When unionized businesses got government aid, as with Chrysler under Lee Iacocca, the workers paid a steep price.

Of course, some would argue that the difference is that the failure of an auto or steel plant in Ohio would not have worldwide implications. But the real essence of the debates at the time were ideological, and were based on the belief, as conservatives put it, that government should not be in the business of “picking winners and losers.”

Nobody doubts the political expediency behind McCain’s shift, but his action does confirm a shift in public attitudes toward government regulation. After nearly forty years, the pendulum is swinging back toward the support for increased government intervention in the economy that was common from the 1930’s through the 1960’s.

New York Times columnist Paul Krugman made a comment on Keith Olberman’s Countdown show on MSNBC Monday night that captures the situation well. Krugman noted that he had never thought another Great Depression was possible in the United States, but that Phil Gramm, could actually bring about such a calamity if he became Treasury Secretary next year.

Krugman is not the only voter who might be thinking of bad economic times ahead, and it appears to have taken the current crisis to expose the economic contradictions that have governed U.S. policies since the Age of Reagan.