The Republican War on Affordable Housing 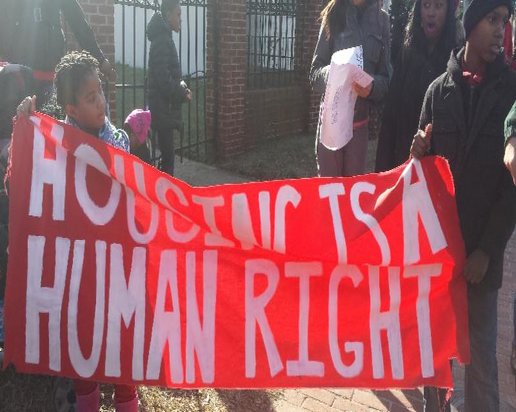 Republicans have lost on Obamacare, gay marriage and immigrant rights, but every night millions of ill-housed Americans  can attest to the GOP’s  successes at worsening the nation’s affordable housing crisis. Republicans have opposed  affordable to housing funding as relentlessly as health care, but with far less publicity and far more success.

The GOP’s effort to scale back affordable housing funding goes back to Eisenhower, who slashed funding for public housing construction in 1951. Republican Richard Nixon unilaterally stopped the construction of new public housing in 1973, and after federal housing funding got a boost under Democrat Jimmy Carter, Ronald Reagan took office and quickly decimated HUD’s budget in 1981.. George W. Bush reversed the funding progress made in Bill Clinton’s second term, and today the Republican controlled Senate and House are competing for which can make the most destructive cuts to the already tattered housing safety net.

The Republican Party once had dissenting voices like former HUD Secretary George Romney and Senators Jacob Javits and Edward Brooke who were passionate supporters of federal support for housing for the poor. But that Republican Party is long gone, having been replaced by those who oppose domestic spending for human needs on ideological grounds.

I was reminded of the Republican’s anti-housing legacy in reading a collection of essays in a new book, Public Housing Myths.  The book is a powerful reality check.  It would be an opinion changer if public housing policy decisions were based on facts rather than myths.

These myths prevail even among activists in San Francisco, which is the shining star of urban public housing strategy. San Francisco is the only city to implement HOPE VI without reducing public housing units (HOPE VI caused a 50% reduction nationwide), and Mayor Lee’s plan to turn public housing management over to nonprofit groups has been widely praised.

Of the book’s ten myths, here are the three I see most critical to dispel.

You know the way House Speaker John Boehner continues to insist that Obamacare has failed despite contrary facts? Well, that’s what happened to public housing during the Nixon Administration.

As Yonah Freemark recounts, public housing was improving in 1973. HUD Secretary George Romney (whose politics would make him a liberal Democrat today) and others within the Nixon Administration strongly supported increased public housing support.

But Nixon did not care about the facts about public housing’s success any more than  Boehner and the GOP are swayed by the millions who have obtained health care under Obamacare. Nixon wanted to cut domestic spending and saw public housing as a politically feasible place to do so.

So despite evidence that reforms to the nation’s public housing were working, and that the housing need was as great as ever, Nixon imposed a moratorium on new public housing construction in 1973. America continues to pay a steep price for this action. Building public housing was far and away the most economically efficient method of housing the nation’s low-income residents, yet the United States felt it was cheaper to spend nothing.

While there remained moderate Republicans supportive of federal housing funding, Nixon’s war on public housing represented the GOP’s future. And when widespread visible homelessness returned to the United States in 1982 the end of public housing construction was among the reasons.

Of the ten myths challenged by this book, I wish this essay by Fritz Umbach and Alexander Gerould could be distributed to every student and professor in urban planning school.  In fact, its careful refutation of false yet widely accepted “statistics” linking public housing and crime should be required reading for all social science professors.

It is so common to associate public housing with increased crime that the lack of factual support seems almost irrelevant. But the authors show that the book that first broke ground in connecting public housing to crime, Oscar Newman’s Defensible Space (1972), relied entirely on a false analysis of two public housing projects across the street from each other in Brooklyn.

Newman’s argument was that the low-rise project had less crime due to its design. This led to a NY Times headline, “High Rise=High Crime” and the subsequent demolition of high-rise projects across the name for being crime centers.

Umbach and Gerould show is that Newman ignored a critical factor: the high-rise project in his study included a much higher percentage of large families. And Newman’s own data showed that the number of children per adult was the key correlation with increased crime in public housing, not the building height.

The authors also show that because many public housing projects were built in high-crime, slum neighborhoods, the resulting crime figures are more reflective of the surrounding area than of public housing per se.  “Everyone” may believe that public housing breeds crime, but very little evidence supports that conclusion.

Myth: Mixed-Income Redevelopment is the Answer

I am among those who believed (before reading this book) that one reason public housing declined was that it shifted from its original working-class base to become primarily the housing of last resort for the poorest of the poor. This view has led to efforts to “return” public housing to more “mixed-income” housing even though in most cities this has meant a reduction in units for the very poor.

Lawrence Vale’s essay on this myth asks a very simple question: have the benefits been sufficiently demonstrated to conclude that this shift to mixed-income public housing is justified?

After you read his essay, I think many will answer no. Or to put it another way, the belief that having the very poor live in buildings with those with working-class jobs enhances their social capital and provides valuable role models sounds good—but evidence of this occurring anywhere is lacking.

Vale shows that a well-run low-income project, as we see in San Francisco’s North Beach development or Boston’s Commonwealth Development, can benefit the very poor without becoming “mixed-income.” As with the pervasive myth about public housing breeding crime, the widely believed view that a concentration of low-income people in public housing is doomed to fail is simply not supported by facts.

While some Democrats have been less than supportive, it is Republican opposition to affordable housing funding that has left millions of Americans without a safe and decent place to call home. Yet little media coverage of homelessness or the nation’s housing crisis frames it as a partisan issue.

And as Public Housing Myths demonstrates, ignoring the facts about public housing and the nation’s housing crisis is a problem. It not only leads to false solutions, but only makes it harder to force politicians to allocate the resources necessary to address the problem.

Randy Shaw is Editor of Beyond Chron. He discusses the impacts of  federal budget cuts on low-income neighborhoods in his new book, The Tenderloin: Sex, Crime and Resistance in the Heart of San Francisco