The Redevelopment Agency Is Not Our Friend 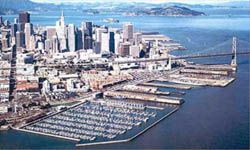 Over the course of almost three generations, more than 25,000 hard-working San Franciscans have been forced from their homes and the land or businesses they purchased because the San Francisco Redevelopment Agency (SFRA) (or its predecessors) and current allies have declared their neighborhoods ‘blighted’ — and Redevelopment’s reign of terror continues.

The California Redevelopment Act of 1945 authorized the city to establish a redevelopment agency, and the Federal Housing Act of 1949 provided federal funding originally intended to provide “a decent home and a suitable environment” for every U.S. family. The federal funding is gone, but what happened to this promise of a decent home and suitable environment?

Greed and racism take center stage: it’s the War on the Poor.

Even before the creation of SFRA, the act of dispossessing San Franciscans publicly materialized at the outbreak of World War II when Japanese-Americans were forced from their homes and the federal government seized their lands.

With the promise of wartime work, the African-American population in the city dramatically increased. African-Americans comprised a small percentage of the city’s population prior to the war and primarily lived along the waterfront with small populations in the Fillmore and Hunters Point. When the U.S. Navy seized Hunters Point, existing residents were kicked out and inexpensive temporary plywood homes were erected, which were undercode according to then current building codes.

And the second group of victims were forced from their homes when in 1948 the Board of Supervisors declared the Fillmore area blighted, and Hunters Point followed shortly thereafter.

Between 1955 and 1975, the city continually updated its estimates on the number of affordable housing units needed in Hunters Point, eventually reaching an estimate of nearly 2,000 units. But did SFRA create the needed units? The Agency destroyed more than 2,700 wartime shelters but by 1983 had only replaced a little over 900 with low- and moderate-priced units.

Overall, more than 6,100 residential units, nearly 2,500 SRO units, and hundreds of small businesses were destroyed in the Western Addition displacing more than 15,000 of our fellow San Franciscans.

When Japanese-Americans returned to the Western Addition, SFRA acted again. Prior to 1960 half of the existing Japantown had been bulldozed displacing 1,500 residents while the Agency used eminent domain to seize 60 small Japanese-American businesses. Between 1962 and 1978, thousands more were driven out of their homes and the Agency seized an additional 58 Japanese-American owned properties using eminent domain. Recently, the Agency attempted to circumvent the community’s desire to prohibit chain stores in Japantown; SFRA tried to hustle the community by offering Starbucks a foothold where it wasn’t welcome.

The Diamond Heights district was virtually undeveloped in the 1950s. But were affordable rental housing units planned by SFRA, as required? With magnificent views of the Bay Area?! NO. More than 2,100 market-rate and above-market-rate homes were constructed instead, and in 1978 SFRA celebrated its racist victory with a symbolic “burning of the mortgage” as reported by the San Francisco Chronicle.

During the 1960s, SFRA attempted to ravage the Mission District but were defeated by an organized community.

In 1970, then Executive Director of SFRA Justin Herman turned the Agency’s sights on the South of Market, specifically the area known as Yerba Buena Center. He declared the land too valuable for low-income people and people of color. By the time SFRA finished ravaging the area, more than 5,000 low-income residents and over 700 small businesses were pushed out of SoMa.


For more than two arduous years, members of the Trinity Plaza Tenants Association, in concert with Sup. Chris Daly and many others, fought to retain affordable rental housing in Civic Center. Now that we have been victorious, SFRA is claiming that the Agency is responsible for creating the affordable units: this is an OUTRIGHT LIE. Never in our two-year struggle did SFRA even attempt to intervene nor did anyone at the Agency voice any concern in support of the tenants.

And the War on the Poor continues.

SFRA has declared that every neighborhood South of Market — from the Embarcadero to Bayview/Hunters Point — is blighted. SoMa alone — home to mostly low-income residents, 52% of which are people of color — has been divided into 13 Redevelopment Areas from Transbay and Rincon Hill to Market/Octavia and Showplace Square. The Agency is now focusing it’s bulldozers on the Mid-Market area.

So what can you do to combat this War on the Poor?

You must join the progressive struggle and FIGHT GENTRIFICATION. For if we all stand alone, then we shall surely perish. San Francisco will become a city of the rich. Each and every one of us will be forced from our homes — indeed, we will be driven out of the city we love. If you’re not worth a million dollars or more, you won’t be welcome here. Hell, you won’t be able to afford to live here.

If you have the time to attend the Planning Commission Thursday night at Room 400 of City Hall, then bring your passion, step to the microphone and voice your feelings and thoughts. If you don’t have time to attend hearings, then email or write the progressive supervisors and ask them to read your comments into the record.

Attend rallies and/or meetings whenever you can. And talk with your friends, your neighbors — encourage them to join the struggle for social justice in San Francisco.

It’s time for us to work together. We must forget our differences — the rich, the haves, will attempt to play us against each other because of those differences.

But we all have two crucial things in common — we are the have-nots and we care about our fellow San Franciscans.

Part of our rallying cry will be a demand to end SFRA. As a government agency it has been a complete failure.