The Real Story of Care Not Cash 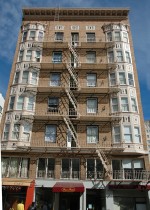 On the fifth anniversary of San Francisco’s Care Not Cash (CNC) program, the Bay Area’s leading daily newspaper offered its standard, predictable four-point analysis: describe CNC as having helped many, profile one or two formerly homeless people now happily housed, quote the Coalition on Homelessness on CNC’s deficiencies, and use quotes from city officials and experts to frame the message that “We’ve made progress but there remains work to be done.” But CNC involves much more. First, it represents the triumph of a nearly two-decades long campaign by grassroots activists to upgrade SROs against the real estate interests promoting their demolition or conversion to tourist hotels. Second, CNC added over $13 million in general fund dollars annually for housing the very poor — an unprecedented amount. Third, CNC’s success might encourage politicians and the electorate to break from the failed policies of the past. The perpetuation of broken strategies that we saw for five seasons in The Wire is not inevitable, which should encourage those seeking progressive change.

CNC and the Transformation of SROs

In 1980, when I began working to preserve San Francisco’s residential hotels, SRO advocates were seen as pushing a radical, anti-private property agenda. Although we won passage in 1981 of a law restricting hotel conversions, Mayor Feinstein had created loopholes and made enforcement difficult.

We could not have foreseen that two decades later, a mayor elected with strong real estate backing would promote a measure that dramatically improved the SRO housing stock, put thousands of units under nonprofit control, and guaranteed the longterm use of SROs by the very poor.

That’s quite an amazing turnaround. And while Mayor Brown implemented the hotel leasing program upon which CNC is based, the program would have run out of money in 2004 had Gavin Newsom not pushed, and the voters not approved, CNC.

Mayor Feinstein was unalterably opposed to providing city funds for permanently housing homeless adults in SROs. Mayor Art Agnos backed this approach, and also signed a 1990 strengthening of the city’s anti-conversion law that for the first time gave nonprofit groups the ability to directly sue hotels violating the measure. This led to the Tenderloin Housing Clinic, the group I head and that publishes Beyond Chron, securing over twenty injunctions against hotels for illegally renting to tourists.

But Agnos’s defeat to Frank Jordan in 1991 ushered in four years of an administration aggressively hostile to SRO preservation. Many of these battles were fought out before city commissions — and while our office and nonprofits like Chinatown Community Development Center brought out SRO tenants to oppose conversion applications, business and real estate interests pushed to eliminate residential SRO’s (these constituencies would later back both CNC and Newsom’s mayoral aspirations, proving again that social change can work in strange ways).

I spent a lot of time talking with Willie Brown during his 1995 mayoral campaign about the importance of preserving SROs, and this is one area where Mayor Brown kept all of his promises. Brown initiated the hotel leasing program that became the foundation for the city’s enhanced commitment to longterm permanent housing for the very poor in SRO’s, a strategy dramatically expanded through CNC.

Starting around 1996, SROs faced an unprecedented economic crisis. For the first time in history, a welfare grant for a single adult was insufficient to obtain permanent housing virtually anywhere in the private market. Had the leasing program and then CNC not emerged, San Francisco homelessness would have increased dramatically, and the SRO housing stock we fought so hard to improve would have further deteriorated.

During the debate around the housing set-aside, the $13.5 million annually injected into nonprofit run housing through CNC was largely ignored. The chief reason was that such housing is leased, not owned by nonprofits, and to some minds is not “permanently affordable.”

But to those living in leased housing through CNC, the fact that a nonprofit does not own the building is irrelevant. And anyone who thinks that SRO owners will transform their buildings into upscale accommodations at the expiration of their longterm leases is delusional; virtually all of the CNC SRO’s will remain forever affordable.

In light of the set-aside initiative’s defeat, and the city’s massive budget deficit, CNC’s $13.5 guaranteed annual low-income housing appropriation is a godsend. This is one of CNC’s greatest, but least appreciated, accomplishments.

As much as I love David Simon’s The Wire, it does send a powerful, convincing, but ultimately overbroad message about the prospects for real social change. Simon primarily blames ambitious politicians and the media for the continuation of failed public policies, but his analysis — completely correct in the case of our nonsensical drug policies — was overcome in the case of CNC.

CNC emerged several years after rents spiked in private SRO’s, leaving general assistance recipients who previously could find permanent housing through the Tenderloin Housing Clinic’s Modified Payment Program priced out of the market. This was a dramatic change from past history, and raised questions as to what function the welfare check was serving if it could not prevent recipients from homelessness.

Mayor Brown began funding nonprofits to lease SRO’s at subsidized rents in response to this imbalance, but this approach was limited by available funds. Brown was not willing to get into a public fight over using welfare grants to fund housing for the very poor.

So we had a classic, Wire-like scenario of a program that gave welfare checks in amounts too small for recipients to avoid homelessness, and hence needed of a major overhaul. The political left knew that dramatically increased grants were politically impossible, and instead focused on preserving the status quo. Gavin Newsom, who had few allies on the left, then did what no politician on The Wire ever did: he took on a controversial issue head on.

Newsom got his conservative base to support a massive increase in affordable housing funding, a measure that would permanently preserve the economic viability of low-cost SROs. A progressive could not have won business and real estate support for a measure whose chief impact has been to permanently keep thousands of poor people to San Francisco — especially when inaction on the welfare check imbalance would have displaced many from the city.

So the real story of Care Not Cash is how constituencies long supporting gentrification and tenant displacement backed a plan by a politician they trusted that undermined these agendas. It is a highly unusual turn of events, and one in which thousands of low-income tenants are the beneficiaries.

Randy Shaw is Editor of Beyond Chron and Director of the Tenderloin Housing Clinic, which began the HSA hotel leasing program in 1999 and operates Care Not Cash hotels.