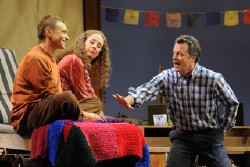 Jane Anderson has written a powerful play that touches every emotion in the book. Bill and Dinah — are a very religious midwestern couple. Dinah wants to visit their free-spirited cousin Jeannette and her husband Neil. These four people are headed for a collision of beliefs, what marriage means, and the meaning of life.

Anderson was inspired to write this play from her own brother’s experience in the Mt. Vision fire of 1995. Her brother and his wife lost everything in the devastating fire – but being the free spirits that they are, they put together a makeshift encampment in the Oakland Hills after the fire swept away their home. Among the charred trees, they turned an Urt (a Mongolian Hut) into a beautiful living space. Whatever they could find in the burnt ruins they hung it from the dead tree branches. There was a Tea Kettle, aluminum trimming from the windows that was melted into what looks like sculptures and other memorabilia. The kitchen was open air. That means that they cooked outside. As Jeannette says: “When it rains, I don’t have to cook.”

The fire is not the only disaster to fall on this couple. Neil has cancer, and it is taking a turn for the worse. They have come to terms with his oncoming death. Neil and Jeannette have a strong bond between them. One very touching moment is when Jeannette tells Bill and Dinah their theory about death. She describes death as a bubble that is beautiful and delicate – but it could burst at any moment. This couple is not into gloom and doom. At least there weren’t until Bill and Dinah arrived. Bill is an uptight Christian. Neil smokes pot to ease his pain. Bill doesn’t like that. “You are putting us all in danger by smoking that illegal stuff” he yells. He leaves to go to the car down the road, until Neil finishes his treatment.

Dinah, Bills wife talks and talks constantly. She is trying to fill gaps, when they don’t need to be filled with words. Neil even tells her that she doesn’t have to make constant conversation to make him feel better. Later in the play, Dinah who no longer loves her Christian husband Bill takes a few puffs on some “Pot”. “It’s tastes like Hay in a Barn. Is that why they call it Grass?” These humor moments keep the play from being totally depressing.

Bill and Dinah used to be in love. But after their daughter was raped and murdered they drifted apart. The death was more than they could bear. Bill relies on his faith to get him through the pain. Dinah and Bill rarely talk to each other. They never go out or do anything together. Dinah had to beg him to visit her cousins, who are completely the opposite in beliefs and philosophy. Jeannette and Neil are facing a great tragedy. And even after they lost their home and all their belongings, they try to live an upbeat life. They don’t dwell on tragedy. But for Bill and Dinah – they might as well be as dead as their marriage is.

The Quality of Life is as passionate and profound as you’re likely to see on any stage. It’s shattering and riveting from start to finish. It’ll get you talking. The minute you leave the theater you will be turning on your cell phone and calling a friend. The play is that good. Not to mention the electrifying performances.

Here is the amazing star-studded cast: Laura Metcalf Jeannette) – “A Brave engrossing performance!” Jo Beth Williams (Dinah) – “just the right nuances and steadfastly perfect!” Steven Culp (Bill) – “Quite simply, masterful!” Dennis Boutsikaris – “Spellbinding!” This isn’t just any old play – it’s an epic! It should, and probably will be on Broadway.

At the American Conservatory Theatre on Geary

AUDACIOUS! That’s what I would say about this frolic of love that crosses racial and sexual no no’s. And it involves a star Football player, who is trying to hide the fact from his stud buddies that he is Gay. There is a Lesbian couple. They have a daughter who is not Gay. The Football hero dates her. As they say in the film “she’s his “Katie”– referring to Tom Cruise’s wife. Bruce Vilanch plays the uncle. You know how funny and entertaining he is. Living with the Uncle, is his not Gay Nephew. One of the Lesbian mothers says to her partner. “He’s Gay” – referring to the Football player. Yep, this movie is a merry-go-round and where it stops is anyone’s guess.

This feast of love is a fun, biting romantic comedy that tells us more about sex and emotions than most books on the subject. Racial barriers come tumbling down like they just fell out of the Dryer. And are they fluffed! There is a great cast in the film that tells a real human story. It’s a pleasing diversion from rocket bombs, car chases and ‘idiot films’. It’s just SuperFun! Catch it while you can.

SO WE HEAR! THE ORPHEUM THEATRE BOX OFFICE IS SELLING $22,000 Dollars a day in Tickets to the upcoming Phantom of the Opera, a Celeb says. “Hey, and why not – it’s the perfect Holiday treat. I’ve seen it four times and can’t wait to see it again. Everyone wants to be chased by The Phantom! It’s the return of elegance.”

RUMORS ARE FLYING. So they say…”Elizabeth Edwards was spotted without her wedding ring on. Now there are rumors that she and John are not living together.” This of course – is not confirmed.

Family is a life sentence, and there is ‘No Parole’ in the world of acclaimed solo performer Carlo D’ Amore. He brings his hit comedy back to SF Nov. 13 – Dec. 13 at The Marsh. In the play, he poses as an attorney, professor, daycare worker, and a nun. It’s a vivid look into the life of an extraordinary woman who sees the world as her playground. More info: http://themarsh.org/
(Daily Event updates) forallevents.info/leehartgrave/

For your info: Madonna’s ex was born Guy Stuart Ritchie, Sept. 10, 1968, in Hatfield, Hertfordshire. The English writer, Director is of Scottish descent. A Celeb wants to know: “Can I see him in Kilts?” Answer – We don’t do Matchmaking here.

PARIS HILTON IN SPACE. SHE HAS MADE THE PASSENGER LIST TO FLY ON RICHARD BRANSON’S FIRST VIRGIN SPACE FLIGHT. Celebs say: “That’s a good place for her!”