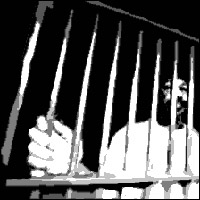 There is no more inhumane, barbaric, racist and classist institution in this country than the prison system.

The very idea of locking people in cages for X number of years and in the process depriving them of their freedom, subjecting them to rapes and beatings, cutting them off from family and loved ones, and taking away their right to vote should have been abandoned centuries ago. Our country not only has the largest number of prisoners in proportion to our population, but it also runs the prison system as a profit-making industry. On top of that, it’s been shown in many studies that it is ineffective in stopping the very crimes that it punishes people for.

One doesn’t have to look far to see the racism. At present, over a million blacks are in our prison system, representing almost half of the inmate population. Yet African Americans only comprise 13% of the nation. In California, where blacks are 6.7% of the population, they make up 28.7% of prison inmates. The problem is not that blacks are more prone to crime. They’re just prosecuted more often than whites. According to Van Jones, founding director of San Francisco’s Ella Baker Center, a larger number of whites use illegal drugs, yet more blacks go to prison for the offense. In “Are Blacks a Criminal Race?” Jones writes: “African American youth arrest rates for drug violations, assaults and weapon offenses are higher than arrest rates for white youth—even though both report similar rates of delinquency.” (Huffington Post, October 5, 2005)

We’re becoming a nation of criminals. Since 1980, the number of incarcerated people has quadrupled. The U.S. prison population comprises 25% of the world’s prisoners, though our country only makes up 5% of the world’s populace. China, with the largest number of people of any country, has a half million fewer people behind bars. Only half of the people in our prisons are there for violent crimes. According to Human Rights Watch, “Nearly three quarters of new admissions to state prison were convicted of nonviolent crimes.” Most of those folks were victims of the “war on drugs” or three strikes laws, two vindictive measures that do nothing to stop the acts they punish.

In fact, prisons have little to do with stopping anything. Studies, including by the U.S. Justice Department, show that they don’t act as a deterrent to crime anymore than the death penalty does. They also don’t rehabilitate anyone. Then why do we keep building them? Why do we keep sending repeat offenders back into jails? Probably because as a society we don’t care whether the prison system is effective or not. Most people just want “criminals” out of sight so that they can believe that they are safe in their comfortable homes. Yet domestic violence, sexual and physical abuse of children, rape, kidnapping and murder occur with an alarming frequency right there in those nice middle-class enclaves. Police forces are invested in an old crime and punishment model that’s right out of the 19th Century. So are big corporations. They “employ” prisoners, often at a rate of 25 or 50 cents an hour, to make all sorts of products, including helmets for soldiers, ammunition belts, paint brushes, home appliances, headphones, even airplane parts. The practice of using prison labor was started after the Civil War. Blacks who didn’t make their sharecropping quotas or who were arrested for petty crimes ended up picking cotton for pennies a day.

It’s time for progressives to demand change. We should work for the election of judges who will give alternative sentences (non-jail time, such as community service) for nonviolent crimes.

We should lobby legislators to decriminalize “vice” (prostitution, public nudity, etc.) and drugs, not to mention so-called quality of life offenses, such as sleeping on the street and panhandling. To be poor or homeless is not a crime. “Vice” is based on archaic religious mumbo-jumbo that has no place in a secular society. Both prostitution and drugs can be better regulated and have fewer negative effects on neighborhoods, if they’re decriminalized.

We should push for better schools and youth skills-building programs in general, especially in poor and working-class neighborhoods. We should close down juvenile incarceration centers and learn to address “anti-social” behavior among kids without locking them up.

We should fight for an end to the death penalty and better ways for our culture to stop violent crime before it happens. Ending violence should be our priority.

Until we can close down prisons altogether, jails should be reserved for violent crimes only.