The Political Exclusion of African-Americans 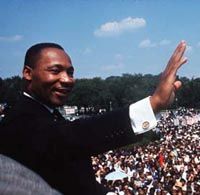 While the worlds of sports and entertainment reflect America’s retreat in the battle for racial justice, far more alarming is the exclusion of African-American political leaders from the national political debate. From the 1960’s through the 1980’s, the media treated African-American mayors as national spokespersons for urban issues. Today, these mayors, and nearly all elected African-Americans, are excluded from the national media stage and their perspectives, and their constituencies concerns, are seen as irrelevant.

After the passage of the 1964 Civil Rights Act, black mayors were soon elected in
Cleveland, Detroit, Newark, and Gary, Indiana. These mayors were featured on the front page of mainstream national magazines like Time and Newsweek, and were viewed as spokespersons for urban America.

It sounds hard to believe from today’s perspective, but in 1988 Jackson gave a one hour televised speech during prime time at the Democratic Convention. For all of the controversy that surrounds Jackson, he raised the profile of African-American political concerns and was routinely included in the Sunday talk shows and the national media conversation about political issues.

Few suspected that Jackson’s 1988 convention appearance would be the high point, rather than a launching pad, for African-American participation on the national stage.

Today, America’s African-American mayors toil in obscurity. Newark New Jersey’s Mayor Sharpe James has spent nearly two decades in office and has received a fraction of the national attention that Richard Hatcher got during his brief tenure as mayor of the much smaller Gary, Indiana. Mayor Street of Philadelphia won re-election handily but is unknown outside his state.

The black successors to Coleman Young in Detroit have not had his activist background or public stature, but even when the city’s Dennis Archer was head of the U.S. Conference of Mayors his opinion on national issues was not sought. The same holds true for the successors to Washington D.C.’s Marion Berry, though current Mayor Williams did get national attention for his fight to get a baseball team back in the capitol city.

The difference in national media coverage is not simply that the novelty of black mayors has passed or that the successor mayors are not larger than life figures like Young and Berry. Rather, it is that the problems of black America no longer interest white media consumers, and the corporate media has responded by ignoring African-American perspectives.

African-American congressmembers are elected to represent black Americans on federal issues, yet they were kept entirely off stage by the national media during campaign 2004 The only African-American allowed by the media to speak out on issues last year was Al Sharpton.

While many progressives like Sharpton, he has never won election to any office, he is not accountable to any constituency, and his failed presidential campaign was funded heavily by Republicans. In addition, he runs a nonprofit that provides no services, he owes money to seemingly everyone he has done business with, and with no clear sources of income he and his staff stay in America’s most expensive hotels.

The national media would never bypass white elected officials to give voice to a white person with Sharpton’s record. Yet Sharpton has even become the media’s African-American expert on religion and moral values, even though Reverend Al has never had a congregation.

The political exclusion of African-Americans from national political conversations is not complete. Blacks like Armstrong Williams (paid $250,000 by the Education Department to push Bush’s agenda), Republican Allan Keyes, and the Washington Post’s moderate to conservative Juan Williams, are regularly panelists on national news shows.

The fact that these folks espouse views entirely unrepresentative of the vast majority of their race is central to their appeal. Unlike progressives like Barbara Lee or Jessie Jackson Jr., they are telling white viewers and listeners what they want to hear.

Imagine if the media similarly misrepresented white attitudes on issues. We could have a parade of Southern gay marriage advocates on Sunday talk shows, or evangelicals pushing for a strong separation between church and state. Fox News, the Bush Administration, and millions of Americans would demand an end to such unrepresentative spokespersons, but the media has no problem letting the 10 per cent of conservative blacks act as spokespersons for the other 90 per cent.

Barack Obama’s emergence ensures that at least one progressive African-American’s perspective will reach national audiences, but Obama is smart enough not to be pigeonholed into the role of “official spokesperson” for his race. The corporate media have a comfort level with Obama they do not have for black progressives with more feisty styles; in other words, do not expect newly-elected Georgia Congresswoman Cynthia McKinney to be invited on Meet the Press anytime soon.

Martin Luther King Jr. would not have been surprised by the media’s declining interest in black perspectives. By the time of his assassination in 1968 he had already witnessed a growing backlash against civil rights, and his campaign to bring racial justice to Chicago foundered on a level of racism that King found worse than Mississippi.

King knew the path to racial justice would be slow, but that does not make the worsening of racial discrimination against blacks, and their increasing political marginalization, any less tragic or excusable.