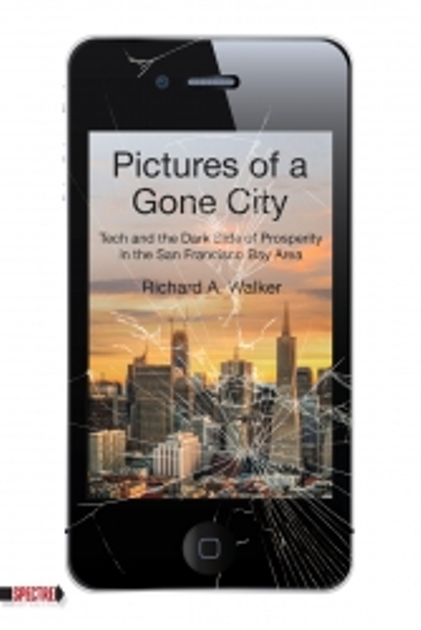 “I ain’t never been to San Francisco. But I believe a thing has happened there”

The American novelist F. Scott Fitzgerald observed in his 1936 book The Crack Up that, “The test of a first-rate intelligence is the ability to hold two opposed ideas in the mind at the same time, and still retain the ability to function.” If that’s true, than geographer and long time Bay Area resident, Richard A. Walker, the author of Pictures of a Gone World (PM; $26.95), has a first-rate intelligence.

Walker has a vast array of facts and figures to prove his two points. He has lists, maps, charts, footnotes and a lengthy bibliography. When he says “San Francisco Bay Area,” he means a region made up of twelve counties that are connected by highways, financial institutions and now cell phone towers.

Anyone who tries to travel from one side of this region to another knows how perilous that can be. And it’s only going to get more so.

The title of Walker’s book comes from a poem by Lawrence Ferlinghetti titled “Pictures of the Gone World” that seethes with sarcasm. “The world is a beautiful place/to be born into/ if you don’t mind some people dying,” Ferlinghetti exclaims.

Ferlinghetti founded City Lights Bookstore and publishing in the early 1950s. Over the past six decades he has watched San Francisco lose its soul.

“The techies have ruined much of the Mission,” he said recently. “Now they’re hitting North Beach. People with Mercedes Benz’s have moved into the North Beach neighborhood where I’ve lived for 36 years. Come back in twenty years and you won’t recognize it. The Manhattanization goes on and on.”

For those of us who live and work in the “megalopolis,” Walker’s “picture” will be all-too familiar. His book might also be infuriating.  It’s one thing to have a “first-rate intelligence” of the kind that F. Scott Fitzgerald extolled. It’s another to be in the presence of a first-rate intelligence when it expresses itself on the page and between the covers of a book.

Pictures of a Gone World can be mind-boggling. Much of the time, Walker sounds like he’s a booster for the San Francisco Bay Area. On page one, he writes that, “The San Francisco metropolis is one of the most important places in the world today.” On the same page, he adds that, “The San Francisco metropolis is a place of virtually unparalleled prosperity and dynamism in our time.”  A bit further on he argues that the “Bay Area” offers the “best possible case” for the “American version” of “contemporary capitalism.” Moreover, he exclaims, “I love the place.” But turn the pages and Walker sounds like he strongly dislikes the Bay Area’s adherence to “the principle that the rich get richer, while the poor can fend for themselves.” He’s also disappointed that the “region has not come to grips with its own environmental footprint.”

At times, Walker sounds like a neo-Marxist. But he can also sound like the Charles Dickens who wrote in A Tale of Two Cities: “It was the best of times, it was the worst of times.” Walker doesn’t call for revolution. Indeed, he writes that capitalism has a “firm grip” on the “allegiances” of Bay Area citizens. What he hopes for is “collective action” and “social progress.”

Pictures of a Gone World is not a book that you will want to curl up with and read all the way through in one sitting. It’s a reference work that will probably sit on the shelf much of the time, along with books such as Peter Schrag’s Paradise Lost: California’s Experience, America’s Future and Ben Mezrich’s The Accidental Billionaires: The Founding of Facebook, a Tale of Sex, Money, Genius, and Betrayal. But it’s a good book to have around.

You might open Pictures of a Gone World when you want to read thumbnail sketches of Google, Facebook and Apple, or when you want to understand the reasons for the revival of Oakland in the 1980s. Hint: it didn’t have to do with “white people and their money.”

Walker’s 455-page tome is at its best when it describes what people in the Bay Area are doing right now to protest gridlock, high rents, social displacement, urban and suburban sprawl, the erosion of open spaces and “spatial segregation by class and race.”

Pictures of a Gone World gets better as it goes along. By the time the author reaches the end of the book, he manages to weave together many of the different threads that threaten to unravel his tapestry chapter by chapter.

At a recent launch for Pictures of a Gone World, Walker explained to a packed house that he “was born with a sliver spoon in his mouth,” and that he’s “a class renegade.” He got local and noted that Sonoma County, where he was speaking, was “cool for those who can afford it,” and that it was no longer on “the edge of the Bay Area.” The “edge” was further north, in Mendocino. Walker’s advice to audience members: “Slow down the juggernaut.”

At the conclusion of his book, when he speaks from the heart rather than the head, he pleads for “a new upsurge of radical organizing.” That’s exactly what the crowd wanted to hear.

Jonah Raskin is the author of the pamphlet, “San Francisco: Gold Rush to Google” with original art by Dana Smith.