The Perfect Solution to Homelessness 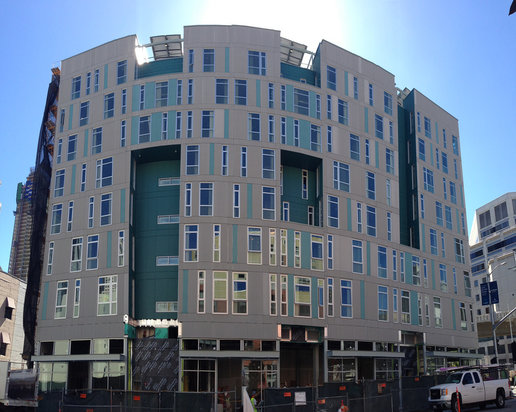 The past month  has seen national media stories on rising homelessness in New York City, San Francisco, Madison, Los Angeles and other cities. Each story describes the problem, the local government response, and the insistence from homeless advocacy groups that this response falls short. This led the New York Times to conclude on September 23, 2015,  “to date, no city has claimed to have the perfect solution” to homelessness.

While technically true— mayors know better than to describe any policy as “perfect”—such a claim is materially false.  Cities have known since the 1990’s that a combination of affordable housing and support services —known now as “supportive housing” —-dramatically reduces homelessness. In combination with outreach services and intensive service housing for those with severe mental health issues, the nation’s cities have developed a “perfect solution” to homelessness.

The problem is that the federal government won’t fund it.

The Times article on homelessness across American cities ignores the federal government abandonment’s of its historic responsibility to provide safe and affordable housing for all Americans.  Even the current effort by House Republicans to slash federal housing programs is curiously absent from an article describing rising homelessness across the nation.

That’s how wildly successful the national Republican Party has been in concealing its refusal to provide the funding necessary to resolve a problem that overwhelmingly impacts heavily Democratic cities.

In 1996 the original edition of my book, The Activist’s Handbook, analyzed two national problems that emerged in the early 1980’s: AIDS and homelessness.  There has since been remarkable progress in the war against AIDS and an equally remarkable lack of progress in ending widespread homelessness in the United States.

Why the difference?  In the case of AIDS, ACT UP and other activist groups succeeded in forcing the federal government to spend the money necessary to address the problem.  Pressure on pharmaceutical companies helped, but the bottom line was that Republicans were forced to fund the attack on AIDS.

Homelessness has proved entirely different. The Republican war on affordable housing began with Eisenhower in 1951, but took on brute force under both Richard Nixon—who killed new public housing—-and Ronald Reagan, whose 1981 budget dealt affordable housing funding a blow from which it has never recovered.

Until President George W. Bush, there were still some Republicans who backed affordable housing as a “brick and mortar” jobs program. But those days are gone.

There is no Congressional Republican support for addressing the nation’s affordable housing crisis. And if Republicans won’t provide the money to house seniors, working families and others, getting them to dramatically increase housing and supportive services for homeless people is way off the political map.

That the homeless crisis is worse in Democratic cities also relieves pressure on Republicans.  So does constant national news stories defining homelessness as a “local” issue, which  lets national Republicans entirely off the hook in a way that never happened with AIDS.

Off the Political Radar

I wrote an article in 2000 that won the Project Censored award as the 9th most censored story of 2000-2001. It was about the presidential candidates in 2000 (Bush, Gore and Nader) all ignoring the nation’s housing crisis.

I could write the same story and presumably win the award every four years. Housing was not even mentioned during the recent three hour Republican presidential debate, and if its come up in the Democratic race I didn’t hear about it.

The federal government’s successful avoidance of responsibility for ending widespread homelessness has left the problem to local governments. But they can reduce homelessness only up to a point.

The money to provide the enormous monthly rent subsidies now needed to house low income families has always come from the federal Section 8 program. Even wealthier cities like San Francisco can’t pick up this cost.

For example, with San Francisco studios going for a minimum of $1800 and SSI recipients getting around $950, the cost of subsidizing a homeless single adult on SSI would be roughly $18,000 a year. And that assumes the SSI recipient needs no services and can find a landlord to rent to them at that rent.

San Francisco is making great headway in ending homelessness among veterans, and that’s important. But absent federal resources neither San Francisco nor any other city can end widespread homelessness.

Of course, many cities have found their own “perfect solution” for homelessness: they provide no services and chase homeless people out of town should they arrive asking for help. The cities avoid critical national media stories on their failure to “solve” the homeless problem, and their residents then complain when they visit the San Francisco or Los Angeles theater district and see homeless people.

As someone heading an organization (the Tenderloin Housing Clinic) that is San Francisco’s leading provider of permanent housing for homeless single adults, I am  accustomed to stories treating “solutions” to homelessness as if the problem were some mysterious disease rather than a product of too few housing units that people can afford. The media knows the truth, it’s just that blaming a distant and unresponsive federal government makes for a less compelling story than challenging local officials over what they are doing about the problem.

If Congress allocated money to address homelessness like it does for new weapons systems, the nation’s homeless problem would be solved in five years. Solved. Those who think that substance abuse and mental health problems  are the problem and not unaffordable housing must believe that starting in 1982 thousands suddenly decided they preferred living on the streets to being housed.  And that they have continued to make this choice despite being able to afford rent.

The truth, of course, is that people were just as troubled in the 1970’s as today. The difference is that homelessness did not become a national crisis in the United States  until the federal government jumped ship.