The “Pay to Play” Myth at SF City Hall 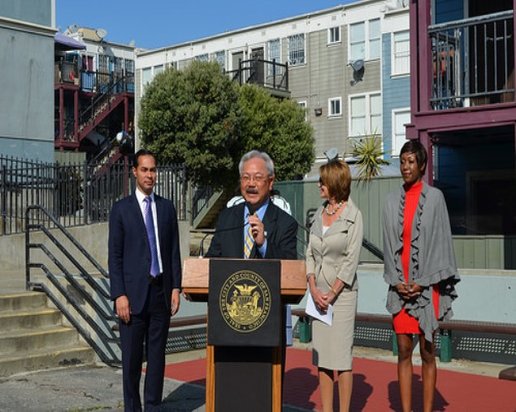 Unless independently wealthy, candidates for public office in the United States have to raise money. And this political reality guarantees that elected politicians will take actions that benefit campaign contributors.

That’s why all the talk about “pay to play” at San Francisco City Hall is so fundamentally wrong. Reporters are trying to elevate FBI talk by three people with little connection to Mayor Lee into a “pay to play” scandal—despite no evidence that the mayor was “paid” through a campaign donation to take an action he would not otherwise have done.

In a real “pay to play” culture, such evidence is easy to find. Yet those desperate to destroy Mayor Lee have not uncovered a single actual example of him acting contrary to his ideology in exchange for money.

Complaints about “pay to play” at City Hall have been heard forever. The issue has now been raised because two former Human Rights Commissioners allegedly claimed in an FBI tape that “pay to play” was part of the Lee Administration (Note to KQED: contrary to your reporting, none of the three charged were mayoral fundraisers).

Keith Jackson, who I knew when he ran and was elected to the School Board in 1994, has no relationship with the mayor. Jackson was part of the Leland Yee scandal.

Nazly Mohajer, who the SF Chronicle notes “is less well known in government circles,” was appointed to the Human Rights Commission in 2006 by Mayor Newsom. The idea that Lee turned to this political nonentity to lead a giant pay to play scam is ridiculous.

Zula Jones, also a former Human Rights Commissioner, was politically active in San Francisco long before Ed Lee became mayor. Even the SF Chronicle’s Emily Green, no fan of Lee, wrote in the article above that “several of Jones’ acquaintances who work in City Hall said she often made overblown boasts about her connections and influence.”

No wonder critics of the mayor were fuming Friday night at District Attorney Gascon’s limiting his prosecution to these three figures. They assumed Gascon had finally reeled in a big fish—not the equivalent of three lost and confused guppies.

Who Defines “Pay to Play”?

When organized labor donates to candidates opposing efforts to cutback public employee pensions, is that “pay to play”? I’ve never seen it that way. Labor backs these candidates because they share a common ideology, not because they need to bribe them for a vote.

Yet when Mayor Lee, a big tech booster, backs policies supporting tech, some wrongly see this as classic “pay to play.” And those seeing Lee’s entire mayoralty as driven by “pay to play” politics never explain why the mayor has devoted so much political capital and money to rebuilding public housing. Do they believe that the low-income families that will benefit from new homes have some secret money pipeline to the mayor that the media has missed?

American politics is swamped by corporate and big money donations. This was true before Citizens United and is now much worse. These contributors expect something in return. But the media typically limits talk of “pay to play” in cases like former Illinois Governor Rod Blagojevich, who solicited bribes in exchange for political appointments. Or to the many cases where legislators slip a sentence into a bill that helps a single corporate or wealthy contributor.

San Francisco has had very high profile vetoes of pro-tenant legislation—Mayor Feinstein’s two vetoes of vacancy control and Mayor Newsom’s veto of anti-demolition legislation—where the beneficiaries of these actions were large mayoral contributors. Yet the media treated this as a function of the campaign financing system, not an illegal “pay to play.”

If a San Francisco supervisor takes money from a developer after or before supporting their project, is that “pay to play.”? I do not think so but if that is the test—and it should not be– then nearly all of our supervisors going back decades have practiced pay to play politics.

So either all acts by politicians are “pay to play” or the term should be limited to the clear-cut, Blagojevich-type cases. What’s so out of bounds in the instant case is that nobody is even claiming that Lee traded favors for cash; the entire “pay to play”  model is missing.

Progressives who think promoting a false Mayor Lee scandal helps their cause are wrong. Such claims primarily increase cynicism toward all political engagement. And a depressed electorate sitting on the sidelines is exactly what big corporate and individual donors depend on for success.

Lee’s critics are strengthened not by relying on wild charges of mayoral corruption but by winning on issues. The mayor has shown that he is more in touch with the electorate than any other current San Francisco politician, which helps explain why his opponents prefer to foster the myth of City Hall’s “pay to play.”