The Old “God and Bible” Routine is Tired 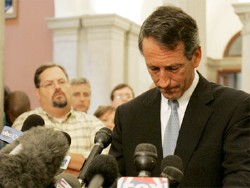 If it’s true that what’s good for the goose is good for the gander, Republican South Carolina Governor Mark Sanford should be resigning from office any moment now.

Sanford, who was recently caught having an extramarital affair with Argentinian “soulmate,” Maria Belen Chapur, called on Democratic President Bill Clinton to resign after it was revealed that he got oral sex from White House intern Monica Lewinsky. Sanford supported the move to impeach Clinton for his afternoon delight. The Governor said at the time, “I think what he did in this matter was reprehensible.”

A “fiscal conservative” critic of politicians taking expensive trips on taxpayer money, Sanford is also accused of using that same public money to visit his sweetie in South America. Even as he was refusing stimulus dollars from the Obama Administration on principle because of his libertarian views (“Christmas coming early for politicians,” he called it in an op ed), Sanford was perfectly okay with spending lots of dough from hard-working constituents on his own extravagant jaunts ($37,600 since November 2005).

But fear not, the errant politician, who was once mentioned as a possible presidential candidate for 2012, has found the perfect cover for his actions. It’s the classic out that conservative politicians always take when they are caught with their pants down with someone other than their spouses.

As he wrote in a recent op-ed in South Carolina’s newspapers, “I am committing to you and the larger family of South Carolinians to use this experience both to trust God in his larger work of changing me and, from my end, to work to becoming a better and more effective leader.”

Not content just to invoke the name of the big guy in the sky, Sanford also quoted from the Bible: “Micah 6:8 asks us to do justice, love mercy, and walk humbly, and as I begin these steps into the last 18 months of this administration, it will indeed be with a more contrite and humble spirit.”

Sanford refuses to give up his governorship, but wants us to feel better about what he’s done because “there is a God to whom we all report for our actions.”

Number one, I don’t report to any God. My actions are my own.

Secondly, I have no problem with Sanford’s affair. That is between him and his wife and family. The soap opera antics of heterosexually married politicians is old news, and, quite frankly, boring beyond belief.

The misuse of public funds is not as easily dismissed. Leaving a state in financial crisis because of ridiculous concerns about stimulus money, while not shy or morally outraged about using public funds to finance a sexual fling, makes this guy a real loser.

Hopefully, the public has had enough of politicians wrapping themselves in God and bible whenever they’re caught exercising their private parts on the public payroll.