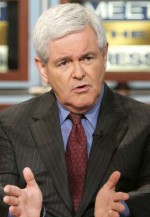 The front page of yesterday’s Sunday New York Times had a 1,406-word profile on disgraced former House Speaker Newt Gingrich – as he seeks the presidency in 2012. With its title, The New Newt: Gingrich Tries to Reconnect With America, the puff piece goes into elaborate detail about how Gingrich is courting conservatives to rehabilitate his image, without ever asking the obvious question. Even if Gingrich should win the Republican nomination next year, how in the world could this guy ever win the White House? Forget that he brought divorce papers to his first wife’s cancer surgery room, or that he cheated on his second wife while impeaching Bill Clinton. The guy is openly calling on House Republicans to shut down the federal government (again!), as he wrote in an op-ed for yesterday’s Washington Post. It raises a question I’ve asked before – why is Newt Gingrich relevant, and why is the Beltway media giving him this attention?

In 2009, after voters decisively put a Democratic President – and nearly 60% Democratic majorities in both houses of Congress – the most frequent guest on NBC’s Meet the Press was Newt Gingrich. Despite the fact that House Speaker Nancy Pelosi had zero appearances that year on the show, and Newt Gingrich has not been elected dogcatcher since 1996.

While at least Sarah Palin was on the Republican national ticket in 2008, and speaks to a segment of right-wing true believers in her party, Newt Gingrich only appears “relevant” because the national press chooses to do so. No one asks what he did for the ten years, but now he makes more appearances on Meet the Press than anyone else.

The New York Times piece explained how Newt Gingrich is courting social conservatives, who may have a problem with his being a twice-divorced adulterer – but the article completely ignored the latter question. Assuming Gingrich does win the GOP nomination in 2012 and faces Barack Obama in the general election, how would such a polarizing right-winger with few positive attributes ever win a majority of the electorate?

As the current battle in Washington has echoes of 1995, Newt Gingrich has seized the opportunity. With help from the Washington Post, who gave him op-ed space in their Sunday paper, has urged Republicans to shut down the federal government. “Another shutdown is not an ideal result,” he wrote, “but for House Republicans, breaking their word would be far worse … Becoming one more promise-breaking, Washington-dominated, sellout group is a much worse fate – politically and ethically – than having the government close for a few days.”

It reminds me of what Rush Limbaugh said in 1995. “Go ahead and shut down the government,” he said. “No one will notice.” That one didn’t go down too well.