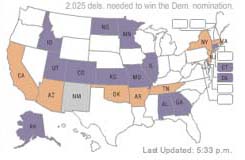 The New York Times had it embarrassingly wrong yesterday, as a front-page headline claimed that Barack Obama’s “fervor fell short” on Super Tuesday. Really? Did anyone predict he would win more states than Hillary Clinton, grab Missouri, and take Minnesota by a 2-1 margin? By focusing on the big coastal (blue) states where Clinton prevailed, the Times exposed their bias against Middle America. As we all know, the nomination is a fight for delegates – and if you break down the results that way, it’s clear that Obama still retains an edge. But you won’t see that in yesterday’s Times, where a chart on the front page claimed that Clinton won the Super Tuesday primary by 84 delegates. Only trouble is that chart did not include the delegate count in five states that Obama carried by a landslide – Minnesota, Colorado, Idaho, North Dakota and Alaska.

On the surface, it appears like Clinton won Super Tuesday because she prevailed in bigger states like New York and California. And if this were a general election (where states use “winner-take-all”), that would matter a great deal. But the Democratic nomination is a fight for delegates – and each state allocates them proportionally. Obama lost New York, but he’ll get still get delegates there. And Obama’s lead in Illinois canceled out Clinton’s delegate lead in New York, making the result in their respective home states a wash. So apart from East Coast bias, why dwell on Clinton’s New York victory?

Just a week ago, Obama was ahead in only 3 Super Tuesday states. After the results were counted, he won 13 states (including Connecticut, in Clinton’s backyard) – with New Mexico too close to call. So how could the New York Times conclude that his “fervor fell short” if he exceeded most expectations? The answer is bi-coastal bias. Obama did not win California despite last-minute momentum, lost Massachusetts despite late endorsements by Ted Kennedy and John Kerry, and did not grab New York from Clinton – although she was nervous enough to spend campaign resources there in the last few days. Again, the Times ignored Middle America.

The media elite mostly live on the East or West Coasts, and regardless of their partisan bent reflect that bias in their writing. How many times have we heard the derisive term “fly-over country” to describe those states that voted for George Bush? Obama clearly won on Tuesday because he proved his viability in states that a Democratic nominee will need to be competitive. If Democrats really want to win, Super Tuesday’s results show that Obama would be a much stronger nominee.

According to CNN’s results, Obama has an edge among “pledged delegates” (i.e., the ones allocated by primary election results) – but Clinton has more total delegates because she leads among “super-delegates” (members of Congress who get a seat at the Convention.) In other words, Clinton is the choice of the establishment – while Obama is the choice of the people. If Clinton becomes the nominee, it will be because elected officials chose to ignore the will of the Democratic voters. Which doesn’t look good.

But that’s not how the Times is spinning it. The front page of yesterday’s paper had a chart called “Counting Delegates” – where it claimed that Clinton won 667 delegates on Tuesday, with Obama trailing at 583. In very small font underneath, it said: “note: some caucuses not included.” Which caucuses were not included? Minnesota and Colorado (where Obama won in both places by a 2-1 margin), North Dakota (where he got 61%), and Idaho and Alaska (where Obama trounced Clinton with over 70%.) If you count these delegates, it erases the gap – and other news sources have done so.

However, the Times can’t help their bias in the delegate count. New Mexico is still too close to call (with 98% counted, Clinton has a 210-vote edge), but they called it for Clinton anyway. Moreover, the online edition projected that she got 14 of the state’s 26 delegates to Obama’s 12 – which makes no sense. Even if Clinton does eke out a victory there, it’s so close that the two will each get 13 delegates. Obama likewise won Missouri in a very close contest, so the two candidates split the delegates in half.

In the aftermath of Super Tuesday, pundits, bloggers and media analysts are still trying to glean the election returns, crunch the numbers and figure out the total delegate count. It’s easy to get sucked into competing theories – biased or not – on the Internet, so sources like the New York Times (which is “serious” journalism) will have more credibility. But now the same newspaper that cheerleaded our rush to War in Iraq is misleading readers about who’s winning the nomination. And their bi-coastal bias is not helping the Democratic Party – as it hopes to prevail in the November election.

“All the news that’s fit to print?” Only if you live on the East or West Coasts.