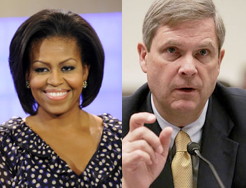 On January 25th, amid much fanfare, First Lady Michelle Obama and Secretary of Agriculture Tom Vilsack released the new school lunch regulations which have been over 3 years in the making. Early hopes that the original proposed rules, which were based on recommendations from the Institute of Medicine, would dramatically change school lunches from the pizza/chicken nugget/french fries model so commonly seen in school cafeterias, to something looking a little more like, well, food, were dashed when Big Food lobbyists were able to force changes in Congress allowing plenty of potatoes, and continuing the longstanding tradition of counting the sauce on pizza as a vegetable. Still, there will be some improvements.

The best part of the new school lunch regulations is that for the first time, there is a maximum limit set on calories; previously there was only a minimum number of calories required, with no maximum. As a result, many schools in the past served foods high in sugar, such as canned fruit packed in heavy syrup rather than its own juice, or extra packages of crackers kids didn’t need, just to reach the required minimum number of calories. Now the old minimum has become the new maximum, so there is no longer any need for calorie inflation in school lunches. Other positive changes are requirements for larger servings and more varied kinds of vegetables, including dark orange and leafy greens, more fruit and whole grains.

On the downside, the 6 cents per lunch additional funding being offered is not enough to offset the increased cost, which has been estimated by the USDA as about 11 cents per meal. To compensate, there are regulations requiring schools to raise the price of paid lunches if they fall below the government reimbursement for a free lunch, as well as new regulations designed to drive more revenue from food sold a la carte in competition with the National School Lunch Program. There are also some changes to the way students are qualified for free meals, which could increase the number of kids eating school lunch.

For some districts, these changes will drive extra revenue, but for school districts like San Francisco, where the paid lunch price is already higher than the free lunch reimbursement, where most a la carte has already been eliminated in an attempt to dispel the stigma of eating school meals, and where most of the new methods for identifying students as qualified for free lunch are already in use, there is little additional revenue projected. Trying to charge students who pay for their lunch a substantially higher price than what the government pays for a free lunch is not going to balance the budget. Our schools will just have to absorb the shortfall, as they always have, driving the deficit for our Student Nutrition department even higher.

That nutrition department deficit, which in 2010-11 topped $3 million, has for years been covered by money from the school district’s general fund, leaving less money for teachers, textbooks, and other classroom needs. While meals served in SFUSD cafeterias already meet or exceed most of the new nutrition regulations, the higher cost of serving this more nutritious food has helped drive the deficit, along with the higher cost of labor in this high cost of living city. In the past, the Board of Education and district administration generously agreed to fund the higher cost, but it was their choice to do so, and there was always the possibility that the whole grains, fresh fruit and salad bars might have to be scaled back to save money, as happened midway through the 2009-10 school year. Now, when the new regulations go into effect next school year, those improvements will be requirements, not forward-thinking extras subject to the budget knife. In other words, not only will the Student Nutrition deficit continue, or even grow, as a result of the new regulations, but the school district administration will have fewer options for fighting that deficit; most reductions in the quality of the food will be off-limits.

That’s the conundrum – we want healthy food served at school, including the larger servings of fruits, vegetables, and whole grains mandated by the new regulations – but should we have to pay for them with our children’s classroom funds? With school funding in California plummeting even under the best case state budget scenario, it’s hard to feel good about cementing healthy food upgrades at the expense of other educational priorities.

We are at a crossroads in this country – we must decide whether it is worth it to spend a little more money now to adequately fund school nutrition programs, so that children can learn to make healthy eating habits a way of life, or whether we want to kick that can down the road, scrimp on school meal funding now, but instead pay the much higher cost of healthcare and loss of productivity when those children grow up to be unhealthy adults dealing with type 2 diabetes, hypertension, heart disease and other weight-related disorders. It is an enormous disappointment that our Congress has chosen the “kick the can” solution.