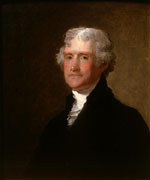 First our nation was shocked to learn that Thomas Jefferson supposedly fathered children with a 14-year-old slave girl he brought with him to Paris. Now, according to the latest dirt, our country’s third president may also have had a Jewish ancestor. The exposé doesn’t come from the yellow journalists at the National Enquirer. It’s courtesy of a much-more reliable source: DNA testing.

Without a doubt, DNA is the new wonder toy. With it, scientists can spy into a person’s genetic blueprint, uncovering what ancestor slept with whom and in what part of the globe they did it. Someone who comes from seemingly pure blood of whatever variety can suddenly find themselves the great-great-great grandson of a person from some culture they absolutely loathe. Time for the ladies of the DAR to roll up their sleeves and donate a little blood.

As amazing as it is that science can tell me who my prehistoric ancestors clubbed and dragged into their caves, it’s also very scary. Like those cameras the city installed at the corner of 16th and Mission here in San Francisco. What price do we pay in terms of our personal liberties for the cops to have a little bit of film when something happens? We’re already subjected to surveillance on buses and at banks. Have those spying eyes really made us safer or deterred any crime?

How long before the government requires DNA fingerprints on birth certificates? How long before one needs a DNA card to receive unemployment benefits, to get a passport, even to rent an apartment?

In today’s info hungry society, we’re used to giving anyone who asks all sorts of personal data: Date of birth, social security number, credit card number, age, race/ethnicity, gender, sexual orientation, etc. Everytime we turn around, someone else wants to know something else about us.

Giving one’s DNA is different than revealing one’s place of birth. It’s the most intimate information about any of us. It’s our essence. The instructions for everything about us, from the color of our eyes and hair to the diseases we’ve inherited from our ancestors. It’s even possible that some of our personality is embedded in those microscopic strands that make up a part of our cells.

I’m not denying DNA testing its rightful place. In criminal cases, it has been useful in freeing the innocent, sometimes even after they were convicted by a jury of their supposed peers. Likewise, using DNA samples from around the world, scientists have tracked the migration of humans out of our original home in Africa and into various parts of the world. Eventually, reading DNA will allow doctors to diagnose and perhaps even cure all sorts of ailments.

Just don’t ask me to subject to a Q-tip the next time I want a date on a Saturday night.

Tommi Avicolli Mecca is a radical, working-class, southern Italian queer performer, writer and activist whose work can be seen at www.avicollimecca.com.