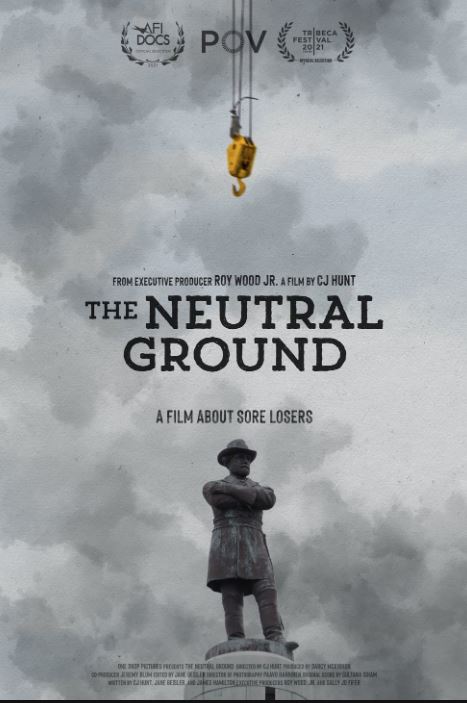 Defenders of the public display of the Robert E. Lee statue and other monuments to the defeated Confederacy rationalize the displays as supposed acknowledgment of the area’s history.  However, no advocates for removing these monuments have stepped forward to deny the existence of slavery, the Confederacy, or men willing to defend the “peculiar institution.”  Besides, what community values are being celebrated by the proud display of these statues?  Is it honoring the willingness to spill other peoples’ blood to preserve the power to hold masses of men and women in permanent bondage?  Is it saying that treason and/or sedition is the South’s greatest virtue?  Or is it visually reminding New Orleans’ majority non-white residents that white people still call the shots in town?

Hunt’s documentary starts off following over several years the efforts of the New Orleans municipal government to remove the Lee statue and other monuments honoring figures from the Confederacy.  But it’s ultimately revealed to be a look at the Lost Cause, the historical fairy tale that animated the erection of these public tributes to the white men willing to defend a hateful belief system.

The tenets of the Lost Cause, for those unfamiliar with its lies, are quite simple:

(In a nice touch, Hunt has a small bell ring whenever a Lost Cause supporter utters one or another of these tenets on screen.  A reasonable viewer is put in mind of spots being filled in on a bingo card.)

“The Neutral Ground” does a great job of showing just how far from historical truth these tenets are.  Various Confederate era government documents state outright that preserving slavery is the basis of the Confederacy.  The most damning of these remarks comes from Alexander Stevens, the Vice President of the Confederacy.  He states that the Confederacy is precisely based on inequality between the Black and white races.  Further, slavery is something he considers the natural condition of the Black race.

Accounts from former Black slaves, pictures of whipping scars left on slaves’ backs, and severe prohibitions on allowing slaves to become literate undermine the veracity of the downplaying of slavery’s awfulness.  Also, a white person’s claiming slavery was not onerous would have more persuasive weight if they’d personally lived the life of a Black Southern field slave for at least a year.

Hunt’s approach to discussing the Lost Cause and its adherents shows why “both-siderist” journalism is a pox on the public discourse.  There’s a huge difference between a willingness to let people with divergent points of view have their say and a willingness to uncritically sit back without challenging obvious nonsense.  Hunt lets his pro-Confederate subjects have their say yet doesn’t aggressively challenge them to their face.  Instead, he lets his subjects open the door to exposure to his point of view.  It’s not Hunt’s fault that his suggestion of visiting a plantation set up to show the true human costs of Southern slavery gets instantly rejected by these modern Confederate sympathizers as a pack of lies.

However much Lost Cause believers want to claim otherwise, the weight of historic evidence Hunt presents in the film shows that the Confederacy was based on continuing an evil institution that deserved to be wiped off the face of the earth.  By comparison, prejudice and/or denial come across as the main evidentiary props for the Lost Cause’s continued popularity in contemporary America.

The United Daughters of the Confederacy can be blamed for originating the idea of the Lost Cause.  These were women who learned the corpses of their dead husbands, brothers, and sons had simply been dumped in mass graves or ditches and covered up with dirt.  One interviewee describes the public Confederate monuments as a substitute for the honorable cemeteries the Confederate dead were denied.

That comment does earn a moment of human sympathy.  But then more disturbing questions get raised by that comment.  If attempted secession from the United States is worthy of memorializing, shouldn’t there be monuments for other people who’ve betrayed America such as Benedict Arnold, American spies for the Nazis, or Americans carrying out Al Qaeda operations?  If the goal is atonement for supporting a system that deliberately kept human beings different from whites in bondage, where’s the public recognition that slavery of Blacks was wrong?

If anything, the history of the ceremonies for these Confederate monuments’ erection show a pronounced lack of remorse for the Confederacy’s official bigotry.  It isn’t a coincidence that demand for these monuments was greatest during periods of agitation for bettering race relations.  Nor is it an accident that the path of uniformed Confederate veterans heading to a monument’s dedication ceremony went through the heavily black areas of a town.

A reading of the Lost Cause’s tenets will strike a reasonable viewer as sharing Holocaust denial’s rejecting or ignoring culpability for deliberate and/or personal cruelty against other human beings.  But for Americans, the Lost Cause feels relatively worse thanks to the United Daughters of the Confederacy’s actively indoctrinating the children of later generations with their racist beliefs.   Censoring of history school books and even having children be symbolic participants in public ceremonies honoring the Confederacy feels particularly odious.

But the viewer’s real ire should be directed at Northerners’ complicity in popularizing the Lost Cause.  Excerpts from Shirley Temple’s “The Littlest Rebel” and “Gone With The Wind” are notorious examples of how the period’s mass media sold the public a picture of the white antebellum South as a lost paradise.  How far is that from Mark Zuckerberg allowing Facebook to prosper by allowing pro-Orange Skull lies and misinformation to spread unchecked?

Though “The Neutral Ground” is filled with damning information about the Lost Cause, Hunt never takes an aggressively partisan tone in presenting what he finds.  Instead, by crafting the film partly as a personal journey of discovery, the director shows the human failings that prevent a proper accounting of the legacy of the Confederacy.  For instance, Hunt’s father calls out the director’s younger days behavior of denying his heritage as a Black-Filipino child.  The proposed language of an Honest Plaque discussing the real meaning of the Confederacy leaves the white woman who hears Hunt’s suggestion visibly discomfited.  Hunt has no need to personally destroy on screen the bigoted beliefs of his pro-Confederacy interview subjects.  Their ignorance or denial is generally its own condemnation.

Contrary to right-wing denials, the call to remove the Confederate monuments from New Orleans’ public spaces was not a specific reaction to Dylann Roof’s racist murders.  As a member of Take ‘Em Down NOLA explains, the campaign for these statues’ removal dates back to 1973.   Nor is removal of those four monuments likely to set off an avalanche of erasure of Southern history.  In a disturbing sequence late in the film, the viewer will feel overwhelmed seeing  the list of the many New Orleans roads, public buildings, and the like that happen to be named after slaveholders or Confederate officials.  Nobody’s calling for New Orleans’ French Quarter to be renamed, but that doesn’t mean there’s a license to forget that the area used to be a slave marketplace.

Reality and sexual self-confidence don’t appear to be intimate acquaintances among the monument defenders Hunt catches on film.  One white guy claims removal of a Confederate monument presages a personal attack on white people.  Several other white guys brandish their penis substitute assault rifles in anticipation of using them against unarmed protesters wanting the monuments removed.  Hunt captures the ludicrousness of the expected confrontation by removing his artificially inserted dramatic music to reveal the actual incongruous lilt of a flute.

“The Neutral Ground,” though, doesn’t shy away from mentioning the Confederate monument defenders’ readiness to use violence to keep the statues up.  Implementation of New Orleans’ decree to remove the four controversial monuments was hindered by death threats being made against local contractors who could perform the removal.  On the ground footage of the tiki torch bearing marchers at the 2017 Charlottesville rally show these defenders’ readiness to injure their “enemies” or worse.

Oddly enough, the most troubling sequence featuring a Confederate monument defender is that of a white teen taking off his shirt.  He had been quite happy earlier to wear the uniform of one of the racist groups defending the monument and to shout racist slogans.  Yet when he faces the possibility of deservedly getting stomped, he tries to save his hide by removing his shirt.  Hunt asks the teen why he was there and his response is “it’d be fun.”  “Fun” also happens to be the way more than a few whites described the experience of watching a Black man getting lynched by a white mob.

Perhaps that’s why Hunt’s participation in the re-enactment of an 1811 slave revolt aimed at shutting down New Orleans’ slave trade feels so liberating.   It’s a reclamation of a part of the past denied by the Lost Cause.  Now if only Ava DuVernay or Oprah Winfrey could create a Hollywood-style blockbuster about a successful slave revolt…

(“The Neutral Ground” is available for streaming on the POV website through August 5, 2021.)