The Myth of the Reagan Democrat 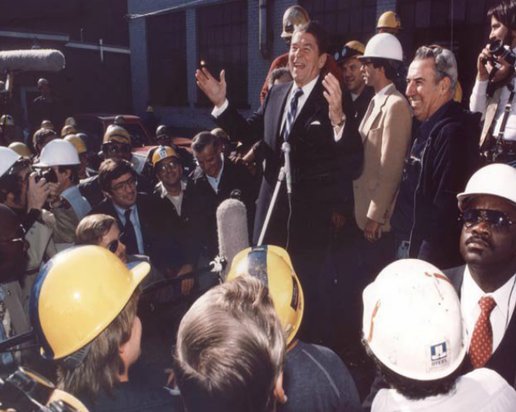 Reagan speaks to steelworkers in 1980 campaign

Nancy Reagan died this week, but the myth of the “Reagan Democrats” lives on. Pundits like MSNBC’s Chris Matthews still define national elections through a false “Reagan Democrats” frame, an analysis that puts the votes of white men (what a surprise!) at the center of the 2016 campaign.

Reagan Democrats originally described blue collar white men who left their traditional allegiance to the Democratic Party to back Reagan over Democrat Jimmy Carter in the 1980 election. The phenomenon was vastly overstated from the start, as many blue collar Democrats began voting Republican in presidential elections in 1968 when they backed Richard Nixon. These so-called Reagan Democrats supported Nixon again in 1972, and were Democrats in registration only by the time of Reagan’s 1980 election.

The 1980 election caused many traditionally Democratic constituencies to reject Democrat Carter. For example, Jews deserted the Democratic incumbent at a rate never equaled before or since. Many progressives voted for Barry Commoner or John Anderson running on other parties. Carter had made such a wreck of the economy that millions of traditional Democrats voted otherwise that year.

By 1986, most of the Democrats who had voted Republican for the first time for Reagan in 1980 returned to their roots. The 1986 national elections saw seven incumbent Republican Senators elected in the Reagan 1980 landslide defeated for re-election. Democrats regained control of the Senate.

There were no “Reagan Democrats” left by 1986. The blue collar Democrats who voted for Reagan in 1980, 1984 and for Republican Senators in 1986 were now loyal Republicans. They have stayed Republicans ever since, as shown by voting results in presidential elections through 2012.

So why has the term continued to dominate discussions of national elections?

Sadly, the answer is race.

In virtually every presidential election since Reagan, the media has framed the contest around the candidates’ ability to attract “white working class votes.” The term “Reagan Democrats” never applied to African-Americans or Latinos, only whites.

I described on March 20, 2008 how Barack Obama was routinely faulted for failing to secure such votes in his 2008 primary race against Hillary Clinton, (“Barack Obama and the Courting of ‘Joe Six-Pack’”). The more successful Obama was in winning primaries and caucuses, the more the media stressed his failure to win a poorly defined demographic group—white working class voters- and his alleged inability to “understand” their needs.

The practical implications of the media’s focus on a “who will win the Reagan Democrats” frame is that it renders Latino and African-American votes invisible.

Instead of examining how turnouts by people of color will impact Ohio or Pennsylvania in November, the media ignores these constituents and instead interviews and court white “blue-collar” voters.

You’d never know from traditional media coverage that Latino voting put Obama over the top in Colorado, Virginia and other swing states; nor do you hear about key African-American voter turnout for Obama in states like Florida.

By framing the election as being decided by which candidate can attract the most “blue collar” whites, the media has an excuse not to cover communities of color. While Super Tuesday and the Flint crisis temporarily put African-American votes on the map, CNN and MSNBC ignore Latino voting entirely. The media ignores the political realities of minority voting power in order to  frame their election coverage around the demographics of their viewership.

The media’s racially biased framing of the election is joined by confusion about class. Chris Matthews and other pundits know that most of the nation’s working class is in the service sector rather than “blue-collar” jobs. But they still talk about the anxious “blue collar” voter as if autoworkers and steelworkers were key to Donald Trump’s base and to the entire election.

There is a major political distinction between blue collar, unionized auto workers or machinists who are reliably Democratic and a white male working at Wal-Mart or 7-Eleven who typically votes Republican. Yet the media lumps all together as part of the “white working class” electorate.

Does Donald Trump really have a special appeal to the “white working class voter” who feels economic insecurity? The media says yes, but that conclusion ignores that Mitt Romney won 59% of the white vote despite bashing the white working class (the bottom 47%) in a highly publicized video. Whites negatively impacted by economic dislocation have been voting Republican in presidential elections for years—and they did so regardless of how badly a George W. Bush screwed up the economy in his first term.

Southern working class whites vote Republican not because Democrats have screwed them in the economy but rather because since the 1960’s they have seen the Democrats as the Party of Blacks (and now Blacks and Latinos). Mitt Romney did not win nearly 60% of the white vote because they thought his economic policies would be better for the white working class—they voted for him as the nominee of the party of white people.

I heard Matthews last weekend ask New York City Mayor Bill de Blasio about Hillary Clinton’s alleged “problem” with “Reagan Democrats” I hoped the mayor would explain to Matthews that those voters have long been Republicans. But instead de Blasio played along with an analysis he knew is false, apparently not wanting to jeopardize future appearances on national television.

This continued focus on mythical Reagan Democrats is racist. It’s time for the national media to show that in campaign 2016, Latino and Black Votes Matter.