The Musical of Musicals: The Musical!; It’s Murder Mary!; Buzzin’ Gets a Call from Tuna Texas 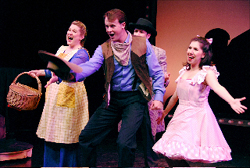 THE MUSICAL OF MUSICALS: The Musical!

It’s wild, it’s inventive. It’s everything you’ve ever dreamed. In Musical of Musicals, five different stories are performed in the style of five different famous Broadway composers – Rodgers and Hammerstein, Stephen Sondheim, Jerry Herman, Andrew Lloyd Webber, and Kander and Ebb. This is not just fun – it’s outrageous fun with a terrific cast that could take on any role in any Broadway show.

From ‘Company’ the mix-up of shows continue, by making light of ‘Company’ in Sondheim style. This time its called “A Little Complex” – as they sing “All of our tenants are a little neurotic.” From “Sound of Music” – there is “Climb every mountain … playing with my own little – Willie-.”

Nothing is sacred in this wide sweeping fun-a-long show. There is a segment on Andrew Lloyd Webber shows. They sing – “I’ve heard that song before. It sounds a little teensy, weensy bit like Puccini.” There is even a falling Chandelier.

You’ll recognize some of your favorite Broadway stars like Elaine Stritch, Andrew Lloyd Webber, and Jerry Herman. In the Stritch segment the song is “Did I put out enough?” based on a song from Follies.

When the Phantom asks the ingénue: “Do you know Opera?” she answers “No.” “Good, I wrote it myself.”

In the Jesus Christ skit… Mary Magdalene says: “I’m tired of hearing you sing. We never talk anymore.” Also in the cast of characters you’ll roll out of your chairs with Norma Desmond, Evita, Che Guevara and Kander and Ebb whose ‘Cabaret’ becomes ‘Life is a Cabaret.’

There is more: a fantastic jail scene from the musical ‘Chicago’. And what else? Well, put on your top hat and lets hear 5,6,7,8 from Chorus Line.

Forbidden Broadway this isn’t. This is more creative and more hilarious. Plus – there are plenty of eye-popping boisterous moments. It’s a one-of-a-kind endearingly wacky look at Broadway musicals and the composers. “Musical of Musicals” is so marvelously bizarre that you will want to drag everyone you know to see it. Believe me … it’s a BLAST!

THE PERFORMERS: They hooked me right off the Bat! That would be the spectacular and astonishing talents of Milissa Carey, Dani Marcus, Mark Ferrell, and Quinn Van Antwerp. If there was ever a perfect cast – this is it. They made the whole evening pure bliss. You want the ‘WOW’ factor? They don’t get any WOWIER than this show.

EXTRA: Here’s a note in the program that I loved. (((Really good actors like the ones listed never appear in the chorus unless it turns out that, well, they have to. And then they do so only grudgingly.)))

Mindy Cooper directs with ferocity. The Scenic Design by Robert Broadfoot is a delight. Kurt Landisman’s lighting is really special as usual, and the Sound by Jeff Mockus was clear as a bell. And what would a musical be without costume designer Cassandra Carpenter, who obviously is a reincarnated Edith Head.

The Center Rep production is at The Lesher Center for the Arts in Walnut Creek.

HERE’S THE PLAYWRIGHTS ADVICE – “KILL SOMEBODY QUICK! OTHERWISE, THE AUDIENCE WILL LOSE INTEREST.”

Well it works. Right out of the shoot…somebody gets killed, and it did keep our interest. Since this play is a Murder mystery they put us in the mood before the play even starts. We are advised by a booming voice – “KILL your Cell phones and Pagers.”

Murder Mary is kinda like, but not that much like the movie “Ten Little Indians”. But that was way back in the Black and White movie days. This sort of, but not quite Gay version (O.K. it is Gay!) is in full color and the drag Queen is stunning and has more wigs than Zsa Zsa Gabor. She’s sexy, stylish and oh so scary. Is she the murderer? Could be – you know how evil those drag queens can be.

This is a Murder Mystery Thriller who-done-it. And I do mean who done who! There are a lot of double entendre words thrown about in this whacked out version of Murder gone wild. Just like ‘Ten Little Indians” there soon will be only one – and that one of course would be the murderer.

There are some great lines and some so tired that the audience groaned a few times at lines like this one. Drag Queen says: “You wanna see the girl next door – go next door.”

There is a buffed stud in the play, that looks and acts too dumb to be a murderer – but that could just be an act. You never know. One of the Gay Guys says to the buffed, hustler type. “You’re not very talkative.” Buffie replies – “I don’t know many words.”

Here is another really fun double entendre moment. Someone asks where one of the suspects is. Another suspect answers—“He went down on the dumb waiter.” To which the Drag Queen replies – “Is there any other kind?”

This is one show where you won’t want to be sedated. It won’t do any good – cause you will be too busy looking beneath the ruffles for clues. There isn’t a Butler – so that leaves that answer out.

So who did it? Was it the dumb buffed guy, the cattie Drag Queen, The host or the Doctor, or his lover? And, what do the old movie posters on the wall tell you? Clues, clues, clues. They will drive you crazy, but along the way – you will have a laugh a minute at this madcap look at a murder mystery that doesn’t take place in a Contessa’s garden, but at an exclusive resort in Russian River. Now that’s a Gay clue right there. There are so many jealous lovers in that town that it could be anyone.

You know what? It’s just hilarious, high-spirited fun for everyone with a good romp with the buffed hustler thrown in for good measure. Did I mention that he runs around half-naked? So what’s he hiding down there? That’s what everyone wants to know. And some will find out. Shall we say “Irresistible?”

THE PERFORMERS: David Bicha, a madcap artist who is always superb. Kai Brothers plays the Buffed guy. To play dumb, you have to be talented – and this guys got it. P.A. Cooley –always takes us into the wild where he unleashes his many talents. John Hutchinson as Bebe Buzzby is absolutely insanely the funniest person I’ve seen in a long time. Christopher Morrell and Drew Todd are inspired and perfectly cast.

F.Allen Sawyer directs this play like he is having fun making this big teeming farce. The Playwrights Andrew Black and Patricia Milton bring back the lost art of Story Telling. Can’t wait for their next one.

AT THE NEW CONSERVATORY THEATRE CENTER

(((Lee Hartgrave has contributed to the San Francisco Chronicle Sunday Datebook and produced a long running Arts segment on KQED-fm.))

In Tuna Texas, Vera Carp the richest woman in town and the V.P. of the ‘Smut Snatchers club’ called to chat about her next appearance in San Francisco. The first thing out of her mouth was “We’ve got to find a cover for Coit Tower. It’s just too suggestive!”

I asked Vera about what she thought of some of the other Tuna Residents like Didi Snavely, the gun shop owner whose slogan is “If Didi can’t kill it, its immortal”. “I love Didi. I feel Sorry for her”, Carp said. “I give her all my old duds. She only wears plastic you know. Plastic is easy to clean. I can’t wear plastic – I’m allergic to it.”

Vera Carp has some observations about the upcoming election. When I asked her about who would win – Hillary or Obama? – she said: “Hillary needs to tell Bill to quit waving his finger. God knows where it’s been. I’m voting for Judy Garland. She would be the first dead president. It would be just as good as what we have now. As for Mc Cain – he is too much like Elmer Fudd.”

I suggested to Vera that maybe she could play Norma Desmond in the show. “Oh No – I’m too young for that, besides the Corpse in the Pool would be a total Tuna turnoff. It would ruin everybody’s party.”

Have you started any new clubs in Tuna Texas? “Well yes. It’s called the ‘Main Whipping Children’s club.’ How do we expect to win wars if we don’t whip our children?”

What do you think about California’s new Gay Marriage Law? “I caught my son shaving his legs before he joined the military. I think I’ll pass on that!”

Thank you Vera Carp for the insights into Tuna Texas where red necks, the moral majority and the Smut Snatchers Club are still running the town of Tuna.

“We do hate here in Tuna Texas – but we hate in a Christian way.” — says Vera Carp, the ‘Richest Woman in Texas’.