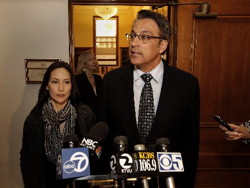 As the debate over San Francisco Sheriff Ross Mirkarimi continues, one impact is beyond dispute: the controversy is eclipsing far more critical issues affecting San Francisco. In the past two weeks I have attended two press events involving Mayor Lee in which every media question ignored the issue at hand and instead focused on Mirkarimi. The January 12 event included a broad cross section of affordable housing advocates, builders, developers and others who were coming together to promote a vital San Francisco Housing Trust Fund; the media ignored everything Mayor Lee and other speakers said about this important issue and instead swarmed the mayor to ask about Mirkarimi. San Francisco faces challenges on job creation, the end of Redevelopment, the city budget, and a number of pending development projects. Yet the talk of the town remains Ross Mirkarimi.

In my experience in San Francisco going back to 1979, the media spends the first month after a mayor has been sworn in focusing on the plans and personnel of the new administration. Not this time. Ross Mirkarimi’s domestic violence charges have dominated the news cycle from the time they first emerged, and this is likely to be the case until the matter is resolved.

I bet Mirkarimi has gotten more media coverage in his month as sheriff than predecessor Mike Hennessey got in 32 years. The Sheriff has rarely had a high profile in San Francisco. San Francisco is a City and County, so its sheriff does not have the power over non-city areas that has brought the office greater attention in Los Angeles County or Maricopa County, Arizona (home of the racist Sheriff Joe Arpaio).

Richard Hongisto made national headlines when he temporarily refused to evict International Hotel tenants, and went to jail for contempt. And his interim replacement Gene Brown got attention through a series of prisoner escapes that coincided with Hennessy’s 1979 campaign.

But this is the first time the Sheriff has eclipsed the Mayor, the Board of Supervisors, and even the Governor for over a month as a topic of public discussion.

Mayor Ed Lee’s nose to the grindstone approach is popular with voters, who prefer a mayor focused entirely on getting things done. But the Mayor’s efforts to create affordable and workforce housing, expand small business loans, revitalize Ocean Avenue, and similar actions he has taken in January cannot match the gossip quotient of domestic violence charges against the city’s Sheriff.

Are people talking nonstop about Mirkarimi because of the constant media coverage, or because they are genuinely interested in a story that concerns far less people than those affected by the above issues and others?
I heard a reporter ask the mayor at a January 24th press event whether, like the electrical outage at Candlestick in December, the Mirkarimi charges were making San Francisco a “national embarrassment.” What possible basis could there be for such a question, other than to justify media focus on a story with so few new facts that even the smallest new detail becomes a front-page article.

It would be one thing if San Francisco had elected Mirkarimi with such charges pending. But that is not what happened here.

What the media might have reported if not for the Mirkarimi distraction is that Mayor Lee brings multiple Supervisors to most press events, a clear break from past mayors. And each event is geared to building support for future actions, functioning as organizing opportunities rather than the standard ribbon cutting.

Mayor Lee is not going to get in public yelling matches, or create gossip through his personal life. It appears that a media that privately complained about Gavin Newsom’s distractions prefer this type of coverage after all.