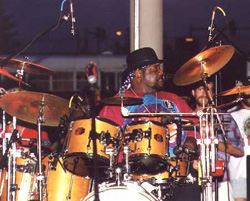 In 1976, I caught my first glimpse of the now legendary “Buddy” Miles when he opened the show at D.C.’s Capital Centre for Chick Corea’s group Return to Forever and Carlos Santana. As I recall, the crowd began to chant rather impatiently for the headliners, blissfully unaware they were seeing the drummer of Jimi Hendrix’s beloved Band of Gypsys. Undaunted, the affable Miles laughed and told the crowd that Chick and Carlos would soon be out and began to sing a line from his trademark song, “Oh my mind’s been goin’ through them changes”. Within moments, the audience recognized the tune, Buddy rocked ’em and left the stage. Buddy Miles passed away this week in Austin, Texas at the age of 60.

Born George Allen Miles Jr. in Omaha, Nebraska, his aunt nicknamed him after the big-band drummer Buddy Rich, and began playing drums as a child and was 12 years old when he joined his father’s jazz group, the Bebops. As a teenager he also worked with soul and rhythm-and-blues acts, among them the Ink Spots, the Delfonics and Wilson Pickett. By 1967, he had moved to Chicago, where he was a founding member of the Electric Flag.

In 1967 he formed the Electric Flag with guitarist Mike Bloomfield. While the lead vocalist for the Flag was Nick Gravenites, fans of the Flag always looked forward to the numbers sung by Miles. Listen to the slow blues song “Texas” by the short-lived Flag and you will get a sense of what Miles brought to the group. Although the band collapsed in the wake of a disappointing second album, Miles retained its horn section for his next venture, the Buddy Miles Express. This exciting unit also included former Mitch Ryder guitarist Jim McCarthy. Their first album, Expressway To Your Skull, was full of driving, electric soul rhythms that had the blessing of Jimi Hendrix, who produced the album and wrote the sleeve notes.

After Electric Flag, Miles would begin his involvement with the legendary Hendrix. Miles had met Hendrix in an earlier time when both were acting as sidemen for other artists in the early ’60s. Their meeting had occurred in Canada at a show both were participating in. This prefaced a later friendship that would result in varied collaborations between the two artists. An extremely busy Hendrix would produce the Buddy Miles Express release, “Electric Church”, in 1969. There was obvious public curiosity as to whether the name of the band “Buddy Miles Express” was influenced by Hendrix’s act, “The Jimi Hendrix Experience”.

Soon after, Hendrix started opening his recording style to include guest artists. And in this mode Hendrix was working in, Miles quite naturally was invited to participate. He played with Jimi Hendrix on the hugely influential “Electric Ladyland” album. Miles played on the songs “Rainy Day, Dream Away” and “Still Raining, Still Dreaming”.

Soon after the release of this groundbreaking album, he would join Hendrix in a short lived Band of Gypsys. One of the notable features for his auidience at the time was the fact that all of the players were black. This was a first for Hendrix as an international recording star and this choice reflected a move toward reconnecting with his soul roots. It also had the effect of re-associating rock with its African American roots. “Live at the Fillmore East” was arguably Miles and Hendrix’s most riveting recording. The band was based in New York City where Hendrix was spending the majority of his time. Hendrix, who was tangled in legal litigation concerning contracts he had signed in the past prior to his becoming internationally recognized, was required to release a record to the Capitol Records label as part of the agreement in court. This fact led to the live recording of his collaboration with both Miles and Billy Cox. The Band of Gypsys made a famous and enduring live album that was recorded in New York’s Fillmore East on New Year’s Eve 1969/70. However during a follow up performance a month later, Hendrix had a minor, drug-related meltdown on stage which has also been speculated to have be an act of sabotage. Miles was fired by Hendrix manager, Michael Jeffery and the Band of Gypsys all too short life came to an end.

Miles continued to work with Hendrix during early and mid 1970 after the Jimi Hendrix Experience had failed to reform to record. Miles would share recording studio drumming duties on songs “Room Full of Mirrors”, “Izabella”, “Ezy Ryder” and the first version of “Stepping Stones” (for which Mitchell played a final drum track). These songs have been released in several posthumous Hendrix albums.

Miles went on to produce other records under his own name. A song he had written and recorded with the Band of Gypsys, “Them Changes” was again recorded by Miles with his own band on a release soon after Hendrix’s passing on Mercury Records. Miles’ former Band Of Gypsys sideman, Billy Cox, performed bass guitar on this track. By this time Miles had dropped the “Buddy Miles Express” act name and shortened it to just his own name, Buddy Miles. That band included bassist David Hull (who would go on to work with Joe Perry of Aerosmith) and guitarist Charlie Karp. The same band would release a live album entitled Live which again included his by now signature song, “Them Changes”. In late 1968, they appeared in the Monkees television special 33 1/3 Revolutions Per Monkee which aired in April 1969.

Miles would see the song released yet a fourth time on a collaborative live record he made with Carlos Santana. This particular version was particularly notable for its intense energy, horn lines and blazing guitar work supplied by a very young and energetic Santana. Miles would then go on to be signed by the 70’s-80’s ear record label, Casablanca Records, best known for their rock act KISS. Miles’ work for the label included the excellent album released under his own name, Bicentennial Gathering Of The Tribes. It would include on its liner notes a quote from President John F Kennedy concerning the American Indians. That quote would include the line “When we neglect the heroic past of the American Indian, we thereby weaken our own heritage”. This was interesting in relationship to his former friendship and collaborations with Jimi Hendrix who, in fact, had much American Indian blood in his family line.

In 1986 Miles performed vocals for the California Raisins claymation ad campaign, most notably singing “I Heard It Through the Grapevine” and was also lead vocals on two California Raisins albums featuring 1960’s R&B covers. In 1986 and 1987, after spending the late 1970s and early 1980s incarcerated for drug charges, he also rejoined Carlos Santana as a vocalist on Santana’s album Freedom.

Miles was seen in the Hendrix-family-owned, official video release “The Making of Electric Ladyland” on Rhino Records. That video featured interviews with the majority of players who were involved in recording the legendary Hendrix album. Miles even went as far as to be video recorded playing his same drum tracks yet again in the studio to the original multi-track recordings of Hendrix. In 1999 Miles appeared on the late Bruce Cameron’s album, “Midnight Daydream” that included other Hendrix alumni Billy Cox and Mitch Mitchell along with Jack Bruce and others.

In 2004 Miles reunited yet again with Billy Cox of the Band of Gypsys to re-record songs from the original live album of 1970 with guitarists Eric Gales, Kenny Olsen, Sheldon Reynolds and Andy Aledort. The album, titled “The Band Of Gypsys Return”, was released in 2006. Until his death, Miles continued to be active musically and performed many shows with proceeds going to help support victims of natural disasters and other noble causes. Miles was also credited on sessions with George Clinton/Parliament/Funkadelic.

Buddy Miles was one of the best loved rock and roll drummers of our generation and his legacy with Hendrix will no doubt cement his place in history forever. I will miss him.