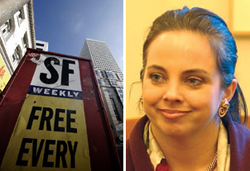 It is no secret that the SF Weekly’s Matt Smith has trouble getting his facts straight, and that Supervisor Michela Alioto-Pier rarely does her homework. These two great minds have now combined to claim in the October 10 SF Weekly and at the October 30 Board of Supervisors meeting that the Tenderloin Housing Clinic (publisher of Beyond Chron) spends millions of dollars of city funds on illegal lobbying each year. Smith reached this conclusion, picked up without investigation by Alioto-Pier, by misreading the Clinic’s 990 form filed with the IRS. Instead of citing the total money the Clinic actually spent lobbying —$728—Smith erroneously cited the maximum amount the Clinic was legally entitled to spend ($4.8 million.) That’s quite a difference. Alioto-Pier then compounded Smith’s error by using his erroneous statistics for political payback against the Clinic, introducing a measure calling for a hearing into the Clinic’s alleged misuse of city funds for lobbying.

I didn’t bother correcting the inaccuracies in Matt Smith’s 8000-word SF Weekly cover story attack on the Tenderloin Housing Clinic last month. Having written my own pre-publication analysis of Smith’s article, his personal vendetta against THC was clear

But there is at least one San Franciscan for whom Smith’s words are the Bible. That person is Michela Alioto-Pier, a Supervisor not known for the long hours she spends in her office.

After the Commission ruled in our favor, one of Alioto-Pier’s allies told me that he would “get me for this,” and that I “would pay for this.” He shoved Ms. Zamora as she left the hearing room.

Lo and behold, at the very next Board Meeting after this threat, Alioto-Pier called for a hearing into the SF Weekly’s claim that the Clinic was “spending government grant money and contract payments meant to serve the poor on lobbying expenses.” The request further stated that the hearing “will examine why, according to the most recent available IRS filings, the Tenderloin Housing Clinic spent $1.5 million out of their budget last year for lobbying purposes and $3.5 million on lobbying efforts during the last four years. “

While Alioto-Pier denies any “payback” for her friends MTA defeat, she called for a hearing a full three weeks after Smith’s article, and never contacted THC about his claims prior to requesting the hearing. This looks like a person either acting in haste, or someone who lacks basic courtesy.

Had Alioto-Pier contacted THC, she would have avoided revealing both herself and Smith as being incapable of correctly reading a basic financial document.

Smith was so excited to see a total lobbying amount of $4.8 million on the Clinic’s most recent 990 form that he ignored the fact that this was the maximum amount the group was authorized to spend.

There is a line item just below that number that asks for the “Total lobbying expenditures.” Had Smith learned to read more carefully, he would have noted that this amount totaled $728.00.

In other words, Smith’s total – adopted without question by a sitting Supervisor – was wrong by over $4 million.

And just to show that Smith’s error may be based more on malice than ineptitude, there is another line that asks about “Grassroots lobbying expenditures.” That amount also totaled $728.00.

And Smith ignored the title of the key section, which reads “Lobbying ceiling amount.” To most people, “ceiling” meets the top amount that can be spent, not the actual expenditure.

According to one of our financial analysts, it took a high degree of incompetence for Smith to make such a mistake. I’ll leave that judgment to others.

But the premise of the Smith/Alioto-Pier analysis shows that neither have a clue about the procedures governing city contracting with nonprofits.

THC, like most city contractors, is paid on a cost reimbursement basis. In other words, the Clinic has to show invoices, cancelled checks, bills etc. before getting money from the city.

In addition to the cost reimbursement nature of city contracts, there is a vast array of city program and finance monitors to make sure that no funds go for the wrong purpose. San Francisco imposes extensive reporting requirements for further financial accountability.

Despite the above controls, Smith and Alioto-Pier assumed that THC could somehow illegally divert over a million dollars a year away from paying the costs of running its housing programs for homeless people without any city staff noticing. So while Smith and Alioto-Pier are trying to attack only THC, they are really making a potentially libelous attack on the integrity and competency of city contract administrators.

After nearly four years on the Board, one would think Alioto-Pier would have some clue as to the city’s nonprofit contracting process. Particularly as the Board votes to approve such contracts each year.

THC is audited annually by an independent accounting firm. In addition, the City Controller’s Office audited a random sample of nonprofits including the Clinic and issued a publicly available report on February 9, 2006. The Controller found no misuse of funds.

But Smith and Alioto-Pier were too gleeful about their false information to seek out the Controller’s audit.

Calling for financial investigations of nonprofit groups who oppose you on issues is the type of intimidation that should have no place in San Francisco.

And if an elected official is going to engage in political payback, at least get your facts right.

I received a hand-delivered letter from Alioto-Pier as I was writing this, insisting that no payback was involved and her only concern is our misuse of funds. So even after being alerted on Wednesday that her facts were wrong, she continues to avoid calling me for the truth.

Now she has it.