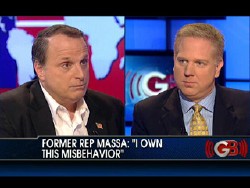 It didn’t take long for the Republicans to take advantage of the Eric Massa mess.

True to form, they jumped right on the bandwagon, accusing the Democrats of not responding appropriately to complaints that now former (as of March 5) U.S. Rep. Eric Massa of New York groped and had tickle fights with male staffers and cursed in his office. According to reports, he even allegedly asked a junior staffer in Barney Frank’s office to dinner and lived with male staffers in an apartment in D.C.

There’s lots more, including supposed sexual shenanigans in the Navy and a euphemism for oral sex called “snorkeling,” but I’ll spare the details. Not because I’m a prude, but there’s been enough written about all of this in the mainstream press. When these type of charges surface, it’s far too easy for every Tom, Dick or Harry to come forward to claim that they were groped, solicited or touched “down there” by the accused.

Which is not saying that Massa’s behavior wasn’t inappropriate. It’s just that media circuses aren’t the best way to determine what did or did not occur and to whom it happened.

Especially when the other political party and right-wing commentators who support it are whipping up the frenzy even more by calling for their rivals heads on a silver platter.

How soon Republicans forget that they’ve been in the same boat, and not that long ago. Or maybe it’s true that elephants have short memories, especially when it’s to their advantage. Does the name Mark Foley ring any bells with Republicans? He was a U.S. Representative from Florida, a GOPer, who was accused of writing sexy emails to male Congressional pages.

Depending on the day and hour, Massa is denying everything or accusing his fellow Democrats of sabotaging him because he voted against President Obama’s healthcare reform package and planned to continue doing so. He says that the “toxic atmosphere of Washington D.C.” (obviously a euphemism for the devil) made him do it. He lived with his aides because he didn’t pay enough for them to afford their own apartments, which of course begs the question, why didn’t he pay them more?

Finally, he admits to a little groping and tickling, but it “wasn’t sexual.”

Enough. It’s time for Massa to admit what he did and for the media to move on to other matters. Sexual harassment is a serious issue, but not the way it’s being played out in the press and by conservative TV and radio hosts.

For the mainstream media and the right-wing commentators, this is a way to bash the “liberal” Democrats in the hopes that it wins them seats in November (just as the Foley scandal was a goldmine for the Dems). It’s also a good way to divert attention from the lack of healthcare, the sinking economy and the continuing wars.

In other words, politics as usual.