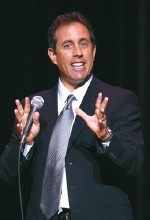 Flying across the country on Jet Blue this week, I stumbled upon Jerry Seinfeld’s new show, The Marriage Ref. Jerry, Tina Fey and Eva Longhoria were, not surprisingly, fun to watch. Much to my embarrassment, I even laughed several times throughout the show. Why was I embarassed? Because this is a show where Jerry, Tina and Eva sit around and make fun of ordinary people.

That’s it. The entire show. Three wealthy celebrities – liberal ones at that – making fun of middle class husbands and wives who bring their marital disputes, the large and the small, real or imagined, to national television for the thrill of 5 minutes of fame and a free cruise. Really – all the couples get an all-expense-paid cruise for revealing their marital spats on national television.

The show works like this: A three-minute taped clip is shown of a couple arguing. Then the celebrity panel (it was Jerry, Tina and Eva on the show I watched, but panelists will rotate) dissect the argument and vote on who should “win.”

The couple is shown again on screen – live this time – and told of the results. One wins, one loses – no middle ground. Too bad anyone who has been married in real life, as compared to reality TV, knows that compromise is the ticket.

Comedian Tom Papa acts as MC, calling on both the panelists and various experts who offer “facts” about the particular dispute. (What exactly is a metrosexual? Let’s go over to our expert … )

What kind of couples and arguments were analyzed during Monday night’s show?

A couple who’s argument centered on the wife’s insistence that her husband build a porch because “he was a man and that’s what men do.”

A woman who wouldn’t let her husband sit at the dining room table – except on Thanksgiving. The table was set for Thanksgiving all year long – the panelists were grossed out by the anticipated dusty plates.

A retired police officer whose wife complained that he shaves his body and likes manicures, pedicures and the tanning bed. During the three minute segment the officer complained about not getting enough sex (referred to on the show as “schnookey”) and opined that “marriage should be like leasing a car. After a certain amount of time, you should have the option to turn her back.”

Tina Fey (say it isn’t so) sided with the cop because he wasn’t getting it at home. Eva Longhoria was more concerned about his grooming and voted for the poor wife: “Mani, pedi, tanny, tranny,” she said, to untold guffaws by the other celebs.

The “marriage refs” made fun of one husband’s weak basketball skills; a wife’s flossing habit; and the aforementioned dust that would gather on the unused Thanksgiving table. You get the picture.

The whole show reeked of gender stereotypes: the loud bossy wife; the bumbling inarticulate husband; the wife who doesn’t let anyone sit on her furniture, the extremely well groomed “metrosexual.” Need I say that all the couples were straight?

In the episode I viewed, three couples were white, one was Hispanic. According to the show’s website, in an earlier episode there was an African-American couple. Their dispute that needed refereeing was that he bought her “50 pairs of thong underwear” and insisted on buying a stripper pole and she wasn’t interested. Jerry voted for the husband, but the rest of the panel said no dice.

You know – men want funky sex and women are cold fish. So what else is new?

Jerry Seinfeld has the clout to create any show he wants. Did he have to develop one without a shred of social consciousness? A show that reinforces traditional stereotypes of gender and marriage roles?

Why did Jerry Seinfeld develop a show whose humor comes only at the expense of others?

Jerry Seinfeld set high standards with Seinfeld. He has let his audience down.