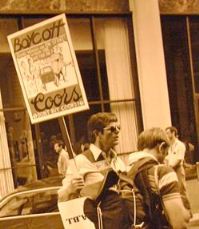 Howard Wallace’s sisters and brothers in the queer, labor, elder, and human rights movements have the sad duty to report his death on Wednesday, 14 November 2012 at beautiful Buena Vista Manor in San Francisco. A veteran of social movements since his high school years in Denver, Colorado, Howard was an activist up until a year before his death.

Howard was born on August 29, 1936 to Edna Horton Wallace and H. Milo Wallace in Philadelphia. His parents relocated first to Worcester, MA and then to Denver where Howard spent most of his upbringing. Howard came out to himself as a gay man at an early age. “I was aware of being gay in the second grade,” he said. “It gave me a strong empathy with other underdogs that stuck with me all my life.”

Howard was a junior in high school when he joined the local chapters of the NAACP and ACLU in 1953. He demonstrated acute organizing and leadership skills at a very young age, managing the campaign of the first African American candidate for the Denver School Board in 1955, working for the successful passage of Colorado’s Fair Employment Practices and Anti-Discrimination law in 1957, and serving on the NAACP Denver and Colorado Boards. In the mid-1950s, Howard’s father threatened to cut off his son’s college tuition if he did not end his political involvement. Howard remembered,” “He put a couple of checks on the dining-room table – the checks for next year’s tuition – and said, ‘Get out [of activism] and you can have those checks.’ I tore them up in his face, and that was the end of my college education.” He worked as a Teamster and warehouse worker during those years. In the early 1960s, he was a founder of the Denver Friends of the Student Non-Violent Coordinating Committee, which organized support actions for the Southern sit-in civil rights movement.

As he moved into the 1960s, Howard’s broad involvement included most of the movements of that era. He joined the ranks of the anti-Vietnam War, helping to found Denver’s Stop the War Committee, and organizing an international defense campaign for Lt. Henry Howe who was court-martialed and sentenced to a dishonorable discharge from the military and a year’s hard labor for attending a 1965 antiwar demonstration. He supported Chicano rights through his work with the New Hispano Party in 1966 and his efforts against police brutality in the Mexican-American community, which united African Americans and Chicanos over several years.

He also joined the Denver branch of the Socialist Workers Party. In 1962 Howard was involved in organizing the Denver Fair Play for Cuba Committee., and in 1965 he was the SWP candidate for the Denver School Board. He remained a member of the SWP until the mid-seventies, when he left over the party’s reluctance to take on LGBT issues.

Howard moved to San Francisco in 1967 with his lover Roger Hovland. He continued to work in the anti-war movement as a leading organizer of popular opposition to the Vietnam war and as a staff organizer for the National Peace Action Coalition. His efforts and those of other progressive activists to bring labor into the movement were successful when the Northern California Labor Councils were the first to officially oppose the war. In 1969, Howard managed the office of the Community Conference to Support the San Francisco State Strike organized by Dr. Carlton Goodlet, publisher of the San Francisco Sun Reporter and a prominent African American leader. Howard spearheaded the victorious city-wide ballot measure Proposition J campaign in 1970, which called for immediate withdrawal from Vietnam

With the rise of an organized gay movement in the early 1970s, Howard founded Bay Area Gay Liberation in 1975 which, according to Howard, “was to advance lesbian and gay liberation by reaching out to potential allies within the labor movement, the feminist movement and movements of people of color and national minorities.” The organization’s life was brief but it did launch numerous mass actions for LGBT rights and dramatically increased the community’s influence. During that period, he formed the Committee to Defend Gays in the Military in the mid-1970s, and began his work on the Coors boycott in 1975 with Teamster Alan Baird and Dave Sickler, one of the most powerful and visible political campaigns of the 1970s and early 1980s.

Howard remembered, “The Teamsters had had a local strike at the Coors distributor. They came to Harvey Milk and I and asked for our support for the strike and boycott. Both Harvey and I endorsed it. Harvey used some of his influence with bartenders and bar owners in the Tavern Guild (a guild of about 100 gay bars in San Francisco). BAGL pushed the boycott strongly in all the bars. At that time Coors had a lie detector test they required of all their employees, which included the question, ‘Are you a homosexual?’” He continued, “So I had a strong sense of the potential of this boycott because the main center of activists within the budding lesbian and gay movement was in bars because that was a meeting place and a recreational place historically. It was a meeting place where people could let their hair down and be themselves, except for police harassment, and meet other lesbian and gay people in a relatively safe atmosphere. So we started getting Coors out of the bars. We not only got it out of the bars in San Francisco, but we extended the campaign in about 13 other states.”

The boycott formally ended in 1987 but many bars continue to exclude Coors from their beer line-ups.

Howard went to Dade County, FL to participate in the unsuccessful attempt to oppose a measure that would have prevented LGBT teachers from working in the Dade County school systems. When he returned, he helped establish boycotts against Florida orange juice, and worked as a key organizer in the Bay Area Committee against the Briggs Initiative in 1978, the California ballot measure, which would have accomplished the same end had it won. Key to defeating the initiative was Howard’s ability to mobilize the labor movement against the measure.

Howard was on the staff of SEIU Local 250 for fourteen years as an organizer and community representative, one of the first in the country to unite LGBT and labor struggles and educate both movements about the other. He retired in 2001.

One of Howard’s greatest achievements was the formation of an organization that united both the LGBT and labor movements. Howard founded the Lesbian Gay Labor Alliance with now International Secretary Treasurer of the Office and Professional Employees Union (OPEIU) Nancy Wohlforth in the mid-1980s. That evolved into Pride at Work, an LGBT labor organization affiliated with the AFL-CIO. Howard served as Vice President of Community Affairs until shortly before his death.

He is preceded in death by his parents and his older brother John of Denver, CO. He is survived by sister Barbara Eastburg of Albuquerque, NM, nieces Linda Eastburg and Gwen Lowery of Albuquerque, NM, nieces Wendy Gossett and Laurie Ames of Denver, CO, and nephew Randy Eastburg of Highland Village, TX. The social movements that Howard led and those who continue the struggle also survive him. He remained true to his beliefs throughout his life and for that he has left a bereaved and thankful community of friends.

There will be a memorial on January 6 at ILWU Local 34 (next to Giants Ballpark) from 2-4 pm. Dolores Huerta of the United Farm Workers and other major figures will remember Howard and his contributions to LGBT, labor, elder, and health care rights. Please join us.

To remember Howard, please send donations to the following organizations at his request: