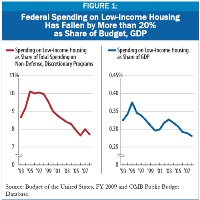 The October 28, 2013 edition of The New Yorker has an article on rising homelessness in New York City that is more remarkable for what it excludes than what it says (“Hidden City,” by Ian Frazier). In a paragraph listing why, all at once “homeless people seemed to be everywhere,” Frazier ignores the single biggest reason: the federal government’s draconian cuts in affordable housing funding (he also ignores the second biggest reason, urban gentrification, which burst just as federal housing subsidies to the poor were drastically cut). There is not a single mention of the federal government’s abandonment of its 1949 National Housing Act mandate to provide housing for all in need anywhere in Frazier’s lengthy article on NYC’s worsening homeless problem.

I wish Frazier’s omission of the federal government’s historic responsibility for funding affordable housing and other anti-poverty programs was the exception. But it’s become the rule.

The longer homelessness and family poverty continues, the more their true causes are forgotten or ignored. Such is clearly true with the nation’s homelessness and affordable housing crisis.

As Peter Dreier pointed out nearly a decade ago, “In his first year in office Reagan halved the budget for public housing and Section 8 to about $17.5 billion. In 1970 there were 300,000 more low-cost rental units (6.5 million) than low-income renter households (6.2 million). By 1985 the number of low-cost units had fallen to 5.6 million, and the number of low-income renter households had grown to 8.9 million, a disparity of 3.3 million units.”

Add to this the decimation of the Community Development Block Grant in Reagan’s 1981 budget and we have a perfect storm for creating homelessness: housing subsidies for the poor were slashed just as they needed to increase to cope with rising urban rents.

The current issue of Roofline, the blog of Shelterforce (published by the National Housing Institute) anticipated Frazier’s glaring omission of any federal responsibility for NYC’s homelessness. In, “The Feds Bow Out: We’re On Our Own,” Alan Mallach uses the recent federal shutdown to express concern over the future federal role: “What we have just seen, I fear, is the final death blow to an era that began in the 1930s with the New Deal, an era when the federal government was deeply engaged in addressing the social and economic issues of the nation, the future of its cities, and the fundamental inequalities of condition and opportunity that remain so much part of our society.”

Do we agree with Mallach that “Once upon a time we thought the federal government had our back. That’s over. We’re on our own”? You can read his excellent article by clicking on the link to the story above.