The Knitters Return to San Francisco 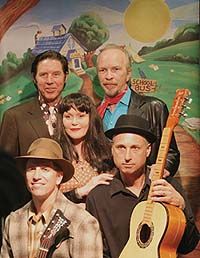 “Some folks might say our music has always been what you call ‘eclectic,'” says John Doe of the Knitters. “Well, OK. As A.P. Carter used to say to me when we’d go song-hunting in the Clinch Mountains, ‘Buddy, it’s all music, y’know.'”

The Knitters – Doe, co-lead vocalist Exene Cervenka, guitarist Dave Alvin, bassist Jonny Ray Bartel, and drummer D.J. Bonebrake – have been rambling a tangled map of American musical highways since way back in the 20th century. Now, with their first album in 20 years, The Modern Sounds of the Knitters, the revered American band is bringing their traditional sound to a new generation of listeners.

Taking a long, thoughtful draw on her corncob pipe, Exene says, “We figured that some people knew our music – from our Folkways and Vanguard albums, or those compilations the Smithsonian put out in the ’90s, or maybe even from some of our early 78s. We decided to call our new one The Modern Sounds of the Knitters to show that our sound is always up-to-date, no matter how far back it reaches.”

The Knitters’ sound stretches back quite a ways, and it wasn’t always the electrified style heard on the group’s new Zoe/Rounder album. “When we played for Ralph Peer in Bristol, Tennessee back in ’27,” Alvin recalls with a nostalgic chuckle, “there wasn’t what you’d call ‘electric’ music. It was just us, Jimmie Rodgers, and the Carter Family with our acoustic guitars, singing into one microphone. Too bad our master from that session fell off the back of a Model A. Our career might have gotten started sooner.”

Bartel – the youngest member of the Knitters and an early adapter of the Rockabilly sound adds, “We were never what you’d call ‘purists,’ though; we were playing the Newport Folk Festival in ’65, and Alan Lomax and Pete Seeger were all in a huff backstage when Bob Dylan appeared there with an electrified band. But we listened to it, and we thought, ‘You know, that boy might just be on to something!'”

In fact, the Knitters are no strangers to the controversy over “electrified” folk music. Some writers bemoaned the fact that the members of the legendary band put their careers on the back burner to undertake an unlikely experiment with punk rock: Exene, Doe, and Bonebrake continue to perform with their well-received side project X; Alvin followed his work in the Blasters with a solo career; and Bartel played bass with the blues-rock band the Red Devils.

“We didn’t much cotton to what Greil Marcus said in the New York Times about our electric stuff,” Alvin says. “If the critics had their way, our music wouldn’t have progressed much past what you hear on The Knitters’ Folk Jamboree at Carnegie Hall [1955]. We think The Modern Sounds of the Knitters should please our old fans and folks who first heard us on Poor Little Critter in the Road.”

The latter album, released by Slash Records in 1985 – which featured folk-styled versions of the Knitters’ punk music, as well as new renditions of songs like the famed title track, which they first recorded for Victor Records in 1932 – brought their original style to a new generation of listeners reared on the punk rock of the day.

Bonebrake – author of the Knitters signature “freight train” rhythm, which later influenced Johnny Cash says of the new release, “When Zoe/Rounder Records asked us to make another record in our original style, we jumped at the chance. It took us back to the old days, when we used to sit around the fire in Glendale, a-pickin’ out the great tunes. We just dusted off the old acoustics and got to it!”

The Modern Sound of the Knitters includes acoustic versions of X’s “In This House That I Call Home,” “Skin Deep Town,” “BurningHouse of Love” and “I’ll Go Down Swinging,” Alvin’s “Dry River,” and Doe’s “(Why Don’t We Even) Try Anymore.”

“We figured some people might know those songs from our ‘electric period,'” Doe says, ‘but we wanted to go back and re-cut them so that you could hear what they sounded like when we originally wrote them- just simple songs that tell a story.”

The new album also includes “The New Call of the Wreckin’ Ball,” a sequel to a song re-cut for Poor Little Critter in the Road (and originally heard on Backwoods Ballads andFront Porch Songs, the 1959 Capitol LP that gave the Kingston Trio a run for their money and became the Knitters’ biggest hit of the “folk revival” era).

Some of the material – Flatt & Scrugg’s “Give Me Flowers While I’m Living” and the Stanley Brothers’ “Rank Stranger” – dates back to the late ’40s and early ’50s, when the Knitters made their brief, much-talked-about transition from a hillbilly string band to the new bluegrass sound.

“Bill Monroe, bless his soul, wasn’t real happy we were friendly with Flatt & Scruggs right after they quit his band, but we all made up,” Alvin recalls affectionately. “And we shared many a stage with Ralph and Carter Stanley. Those boys could sing!”

The group’s Nashville period is reflected in covers of Jimmy Driftwood’s “Long Chain On” and Porter Wagoner’s “I’ll Go Down Swinging.”

Exene remembers, “When we first met Porter, he was singing in a plain brown suit and working solo. I told him, ‘Boy, you could probably go far if you worked on your wardrobe a little and got yourself a partner – maybe a good-lookin’, well-put-together woman.’ Happily, he took my advice.”

The inclusion of “Born to Be Wild” may surprise some. Doe explains, “That song goes back to the ’60s. Bill Graham used to book these unusual bills at the Fillmore West – Miles Davis with the Grateful Dead and the like – and we found ourselves opening for Steppenwolf. Imagine that, a little folk band opening for some psychedelic rockers! It’s one heck of a tune, though.”

In all, The Modern Sounds of the Knitters is a satisfying look back at the breadth of the Knitters’ catalog. “We’re mighty pleased,” Exene says. “We think the new record delivers the authentic Knitters style, and we hope everybody likes it as much as we do.”

The Knitters are at the Great American Music Hall, 859 O’Farrell St. on Tuesday, and Slim’s, 333 11th Street, Wednesday.