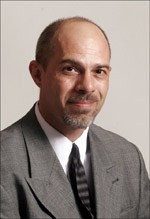 Sometimes when Kansas Education Commissioner Bob Corkins enters a public meeting, his first task is to try to persuade his audience that he doesn’t want to destroy the public education system. An odd job, by any standard, for the top public school official in a state.

Given Corkins’ background, however, it is less than surprising, six months after being appointed to the position, that he still faces such hostility: Corkins came to the job with absolutely no experience in the field of education—not as a teacher, administrator or employee of any kind. In addition, he managed a one-man think tank whose sole purpose was to criticize public schools in Kansas (and in general) and actively work against funding increases mandated by a recent Kansas Supreme Court decision.

All the incredulous looks and folded arms Corkins faces as he traipses from public hearing to public hearing across Kansas are suddenly a bit more understandable.

And, according to those who are actually experienced in the world of public education—teachers, administrators, board members—Corkins deserves to be raked over the coals: he is no friend of public education. Rather, his approach to “helping” schools in Kansas is indicative of a wider trend among conservative operatives to infiltrate the public school system nationally and gut it from the inside. This is has been attempted, for instance, through programs like voucher privatization and the top-down imposition of unreachable standards—both of which Corkins favors strongly.

Corkins’ appointment comes amid already raucous controversy surrounding public education in Kansas—on issues that have made, for instance, the Kansas Board of Education into something of a worldwide laughingstock. Take Darwinian Evolution. The most recent volley in this drawn-out battle exploded last fall when the Kansas Board of Education adopted science standards leaving the door open for local school boards to omit the teaching of Darwin’s Theory of Evolution. Most recently, the Board has taken up consideration of plans to both impose abstinence-only sex education and, completing the proposed coup’d’etat, to ban books like Toni Morrison’s “Beloved” and Ken Kesey’s “One Flew Over the Cuckoo’s Nest.”

This is all background noise, however, when compared to the furor caused by Corkins’ hiring last September. When Corkins—without any field experience other than his widely known animosity for public education—was hired to the tune of $140,000 per year, “he came in,” says Don Hineman, chairman of the Kansas Alliance for Education, “with a pre-existing bias against public education.” What’s more, “some of his activities since then,” continues Hineman, “have demonstrated that he still holds those opinions.” But that’s why conservative Education Board Chairman Steve Abrams loves him: “There’s a learning curve with any commissioner that would come on board,” Abrams says vaguely in Corkins’ defense.

If by “learning curve” Abrams means learning how to cow Kansans into accepting his policies, there may be a long road ahead for the Education Commissioner: folks around the state are not buying what he is selling. But certainly, Corkins’ has not significantly changed his policy positions—though he has, due to intense criticism, slowed his push for plans that include things like vouchers.

Privatization, however—through vouchers and other means of diverting public school funding—has been at the top of Corkins’ reform list for “aiding” the school system. Right of the bat, Corkins visited schools across Kansas, trumpeting about vouchers before school board after school board last fall. Even before the sympathetic State Board had taken up the issue, the commissioner was pushing the Board to recommend both legislative approval for vouchers, as well as for a measure that would have allowed groups (religious, ethnic) to implement charter school programs, even if the local district was against such a charter. Toss anything resembling accountability out the window there.

Additionally, Corkins told legislators that they ought not to worry about abiding by an education funding study—before it was even completed—that would eventually mandate drastic funding increases to make school finance more equitable in Kansas. This study has been cited by the Kansas Supreme Court as an essential guide for legislators as they consider how to appropriately fund Kansas public schools. But Corkins didn’t care about such trivialities. As a result, several top-level employees have resigned from the state education department—resignations directly linked to Corkins’ appointment and policies. “The wheels are coming off the wagon,” progressive State Board member Bill Wagnon (one of four who voted against Corkins) says, “he is driving all professional staff out of the department, and he embarked on a fool’s errand to expand charter schools and exempt them from accountability.”

Corkins’ approach—entering the public school system with obvious biases against it—is not a tactic limited to Kansas. Educators nationally have for months decried Bush’s “No Child Left Behind” law as an attempt to impose undue burdens and standards on public schools without providing, for instance, the necessary funding—thereby setting up the schools for failure. At that point, worry some teachers, conservative lawmakers nationally will have created a reason to begin ushering in reforms like those proposed by Corkins to “fix” the education system. Though they are trying to meet rigorous standards, a lawsuit filed by the National Educator’s Association says that schools would have to spend billions to meet requirements in the law such as the added cost of testing. By creating new “bureaucratic tangles” disguised as reforms, the Bush administration “purports” to have done something when, in reality, it has put public schools in an unmanageable position.

Perhaps these policymakers—Corkins, Abrams, Bush—are doing just what we ought to expect of conservatives placed in charge of public education, an institution Republicans, for example, seem to hold inherently in a suspicious light. Yet the insidious nature of Corkins’ appointment requires a closer look at a strategy implemented to attack the public school system by making its top officer—in this state, at least—an enemy of public education. So far, Corkins has backed off his original gung-ho attitude toward vouchers and charter schools. But this is only because he has been surprised by the initial counter-reaction. Make no mistake, Corkins and other conservatives are working on ways to make their strange, anti-public education agenda into something more neatly packaged. Something they can present as pro-public school, for example. Let’s hope they don’t succeed—and work to take back public education from the likes of Bob Corkins.