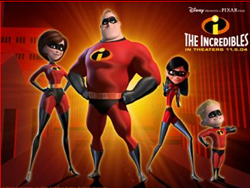 Fans of Marvel Comics of the 1960’s will surely recognize the inspiration behind the latest efforts of Emeryville’s Pixar Animation Studio, “The Incredibles”. Director Brad Bird brings us the tale of a superhero family, brought to life in the same vein as Pixar’s earlier films, Toy Story, Finding Nemo and Monster Inc. Fabulous animation, and a hilarious cast makes this another “fun for the whole family” film.

In the mid 1960’s Marvel’s editor Stan Lee, and the late great cartoonist Jack Kirby, brought us the Fantastic Four, a brainy father figure who could stretch his body named Mr. Fantastic, his wife, the Invisible Girl, her younger brother, a “human torch”, and his best friend, the “Thing”, a mishapen brute whose greatest strength may have been his ability to cope in a world where beauty is valued above all else.

Enter the Incredibles, with a wife who can stretch her body, (Holly Hunter), a daughter that can turn invisible, a dad with brute strength, (Craig T. Nelson), a kid brother that can run at the speed of light, (think the Flash and Marvel’s Quicksilver), and dad’s best friend, who can use the power of ice, (instead of fire and voiced by Samuel L. Jackson). The Fantastic Four were considered at the time, “The World’s Greatest Comic Magazine”, and with two cartoon series and a horrible grade B film made by Roger Corman, (Marvel sued Corman to have it pulled from circulation. It can actually be found as a one day rental at Le Video in the Sunset), this may be as close as we get.

With that history aside, I found myself enjoying this flick. An old comic book artist and collector in my earlier days, I saw a lot in this film that pleased my senses. The characters are hilarious, and the villians were OK. I just loved the “superhero” fashion designer Edna, and the casting of Samuel L. Jackson was great as Frozone. The animation is absolutely astounding.

Yes, Pixar’s ability to animate continues to astound me. The facial contortions, and the suberb casting, like Tim Allen as Buzz Light Year in “Toy Story”, Eddie Murphy as the donkey in “Shrek”, and my personal favorite, Ellen DeGeneres as the Attention Deficit Disorder fish in “Finding Nemo”, just kill me! As much as I liked the Incredibles, I still found myself longing to see some of the original characters this film was inspired by. Those heroes were constantly plagued by morality issues, and even the mundane problems many of us face, like paying rent, or losing a job, or even protesting war. Those are just some of the issues that made comic books like Spiderman great.

There is talk of a new Fantastic Four film, Tom Cruise as Marvel’s “Iron Man”, the new Batman, and surely another Spiderman movie. With the success of the Superman, Batman, Spiderman, and the X-Men films, (I’ll leave out Daredevil and the Hulk for now), I may see some of my old heroes yet again.

And if Pixar wants to bring them to life, even better.