The Hidden Impacts of Rising Inequality 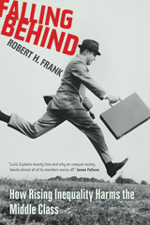 By writing Falling Behind in only 125 pages, economist Robert Frank avoids the long-windedness and (usually) the jargon that has left many readers avoiding economic books at all costs. Frank’s new book is as much about social psychology as economics, and his questions — such as “Why Do We Care About Rank?” — and his adages—“Smart for One, Dumb for All”—address the type of issues that many often wonder about. Frank’s conclusion, that rising inequality hurts the middle-class and all of society even more than we realize, is important. But even more critical is his analysis of the society-wide negative impacts of rising inequality, a subject rarely addressed by the American media.

To get what Frank is trying to accomplish, consider one of the examples he offers: who is happier: a resident of Society A, where everyone has a 4000 sq ft house and a daily commute of an hour each way, or Society B, where the houses are 3000 sq ft and daily commutes are ten minutes?

The obvious answer would appear to be Society B. Such residents avoid long commutes and their houses, like those of Society A, would be no smaller than their neighbors.

But what if most residents of Society B had 4000 sq ft houses, and Mary X only had a 3000 sq ft house. Studies show that Mary X would feel uncomfortable having a smaller house than her neighbors, and might move to Society A to get a bigger and more comparable house regardless of the longer commute.

As Frank describes it, the race for bigger houses is like an arms race. And as the super-rich build 10-20,000 square foot houses (Seattle’s Paul Allen even lives in a 70,000sq ft house), the moderately rich demand houses of at least 5-10,000 sq ft, and the upper-middle class feels they need at least 4000 sq ft. And that’s why American commute times are increasing by 7% annually, as families move further and further away from their workplace in search of a “big enough”—in comparison to others of their income—house they can afford.

By giving the wealthy tax cuts they did not need, the Bush Administration simply provided additional fuel for this costly and unnecessary consumption race. A race that has seen Jaguar cars and $5000 gas grills flying out of showrooms, and where watches promising not to lose a second over 2000 years sell for thousands of dollars.

Frank’s point is that directing surplus consumer dollars to the wealthy harms the middle-class by forcing people to try to rise up the ladder with their own spending. It is not that the middle-class aspires to the 10,000 square foot house. Rather, once housing becomes a “context” that is sensitive to consumption (unlike commuting, where a long commute does not reduce one’s status), the middle-class seeks larger houses.

Some may argue that no member of any class is bound to join this consumer arms race. But the facts are clear that most of America’s middle-class has altered their consumer and home purchases, as the rich have gotten richer and continued to change the rules governing status.

How does the middle-class afford their larger homes, cars, and flat screen televisions? After all, most Americans incomes have been stagnant since the 1970’s, while the incomes of the top 1% have tripled since 1979.

How does the middle-class try to keep up?

The American middle-class is like a small nation trying to keep up with a U.S.-led arms race. The difference is that the continued directing of surplus money to the wealthy is not for “national security” or the ” war on terror,” but because millions of Americans support massive tax breaks for the wealthy so long as a little trickles down to them.

Progressives typically refer to such people as “voting against their own self-interest.” But as Frank shows, middle and working-class support for tax cuts, even cuts that hurt the public schools that their kids attend, are understandable in light of their desperate need FOR CASH NOW.

When progressives wonder why people support tax cuts at the expense of the public services they depend upon, and why politicians like Bush and Schwarzenegger gained political mileage by sacrificing services for tax cuts, Frank explains this as the logical outgrowth of a credit-card dependent electorate. As he puts it:

“If I am thinking about $5000 in credit card debt and thinking about my needs for the next month, and somebody then proposes a tax increase, I am going to say I just can’t afford it, even though I am fully cognizant that public services are under-funded. There is just no way I could bear a tax increase.”

Frank concludes that it would be far-fetched for a voter in such circumstances to support a tax hike on the grounds it will help people sometime in the future.

So by sparking a consumption binge among the rich, the Bush Administration created a middle and working class consumption drive that left people feeling unable to afford tax hikes for public services. A very perceptive and thought-provoking analysis.

Is there a solution? The obvious answer is to ensure the next President rolls back taxes on the rich, as that will at least slightly slow the consumers’ arms race (Frank’s prior book, The Winner-Take-All Society, explains reasons for widening income inequality outside of tax cuts).

But Frank offers a more adventurous if politically unlikely solution: a progressive consumption tax. A graduated tax on spending by the middle-class and above would encourage savings, and penalize those purchasing 50,000 sq ft houses, huge new yachts, etc. There is not a chance in the world that Frank’s progressive consumption tax would ever become law in the United States, but perhaps the next President can use it as a threat to gain support for more moderate changes to the tax code.

Falling Behind is a short book in pages, but not in insight or wisdom. If you have not read a previous Frank book, now is the time.