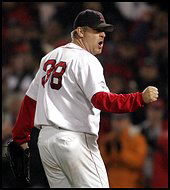 My friends in Boston are strangely quite after returning from Fenway Park last night. Their Red Sox now lead the best-of-seven series 2-0 and have won six straight games dating from Games 4-7 of the American League Championship Series against the New York Yankees. One of them reminded me of a skit from last weeks “Daily Show”, when host Jon Stewart asked his reporter how the Sox would fare against the Cardinals. “The Yankees aren’t dead yet Jon, we fully expect an appeal.Anything can happen!”

Yes, the Red Sox are up 2-0 but no one is celebrating. “The Curse of the Bambino”, the meaningless history of the Sox in the World Series against the Cardinals, (they lost in ’46 and ’67, with Lou Brock vs. “Yaz”), and the sobering death of a young woman after the victory celebrations over the Yankees, have cast a pall over Boston. The Celtics are in a perpetual rebuild after their storied 16 NBA championships, and the Bruins haven’t hoisted Lord Stanley’s Cup in an even longer drought. Only the Patriots have been able to secure a world title for the city known as ‘Beantown”.

My first visit to Fenway in the mid 1980’s, found me in the bleachers watching then Red Sox Roger Clemens pitching to a 3-2 victory over the Yankees. The beautiful all green interior, reminded me of Wimbledon, the giant 30 foot high “Green Monster”, the smell of pretzels on Yawkey Way, and the raucous crowd on a sunny afternoon, I instantly understood the history, the attraction and the love of “Funway” on Kenmore Square. I hadn’t seen the Sox again until they came to SBC, in a series against the Giants, who were fortunate to win that day.

The desire to win the World Series for Boston still seems to know no bounds among my old chums from Brown University, “Man, sometimes it’s really hard to watch. Yesterday I found it helped if I turn the sound down when the Yankees bat. Saturday night my son was all over me for being a Red Sox fan, and bringing him up as a Red Sox fan. I said… OK, well who should we root for? The Angels? Dodgers? Yankees? Today he’s wearing his Shilling shirt for the second day in a row.”

“Instead of paying $500 for a bleacher seat (cheapest quote I could find)….I decided to “slide” thru an alley/gate next to Who’s on First on Yawkey Way….I was so excited I don’t think I calmed down until the 4th inning….I knew I was doing OK when I saw Bob and Myra Kraft, (Owners of the Patriots, they had a pretty good day too), sit down two rows over (at least I didn’t sit in those seats?!)….Sox All The Way!!

To which another friend replied, “You dog!”

“So what is it really like to be a Red Sox fan?”, I asked. “Being a Sox fan, is like driving down I-95 and seeing a wreck up ahead. You tell yourself, don’t look, someone is probably hurt real bad, or dead. But as you approach the crash, you can’t help yourself, and you look anyway, hoping against all hope that it’s gonna be alright. Of course, everyone is dead, it’s horrible. That’s what it’s been like to be a Red Sox fan Doc, except this time, everyone is OK! With the Cardinals, the traffic is slowing down again, there may be another wreck ahead, yet everyone is lookin’, again.”

Following an off day today (the 18th anniversary of Bill Buckner’s infamous error), the World Series will resume Tuesday night at St. Louis’s Busch Stadium, where the Cardinals are unbeaten in six games this postseason. By the time the Red Sox return to Fenway Park, they could already have wrapped up the franchise’s first title since 1918.

As a Giants fan, I’m a little envious of my chums in Boston, that is, unless there is a wreck along the way.