The GOP is Sleepwalking through the DREAM Act 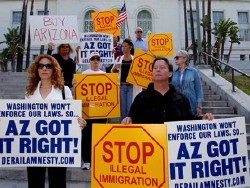 The 2010 election has lulled the GOP into its own dream act. In a year in which GOP congressional candidates benefited profoundly from the slumping economy and an anti-incumbent populist movement, the leadership is convinced it had something to do with their anti-immigrant stance. Yet, lost in the minutiae of local elections in Virginia, Alabama and other districts where Latinos can be used to scare white folks to the voting booth because of an impending invasion, the GOP leadership has missed the larger picture.

While 2010 is a year that will be known for Tea Party histrionics; in particular Sharron Angle’s ridiculous ads vilifying Latinos as gangsters, the Tea Party’s actual electoral impact was ambiguous at best. Post-election analysis by political scientists has shown that the election which swept sixty congressional seats from the Democrats can be more characterized as a very broad ripple, not a wave.

GOP candidates won seats in which the 2008 Obama campaign was able to carry its co-party candidates across the finish line in competitive districts. Many of these tight districts simply swung back in the absence of a mobilizing candidate like Barack Obama and a favorable political atmosphere.

Still the GOP dream act as it pertains to the Latino vote continues. In a characteristically tone deaf article, Lamar Smith wrote in the Washington Post a claim to victory in winning over Latino voters. Using the National Election Poll numbers, Smith argues that:

“Many Hispanics indeed voted for the very Republican candidates most identified as having a pro-enforcement or anti-amnesty stance. And these Republicans generally did as well as, or better than, the Republicans running for the same positions in the previous election.”

But Smith and the GOP are making a huge error in cognitive dissonance, a mental process by which we accept information where they reaffirm our predispositions and discard those that do not. What Smith has failed to see is the work by Dr. Matt Barreto of the University of Washington and Dr. Gary Segura of Stanford University that demonstrates conclusively that the exit poll numbers are overstating Latino support for the GOP.

By using actual precinct voting and demographic data, they show that the analysis of the National Election Poll is almost statistically impossible. And to further prove their point, they conducted post-election interviews that reaffirmed their analysis. For anyone who thinks they are just a couple of progressive professors trying to dispel the myth of Latino support for the GOP, well, they are. But they are also right, and in the world of predicting political behavior one’s credibility is far more important than ideology.

Barreto and Segura based their initial reactions to the inflated exit poll numbers on their surveys of Latinos prior to the election. Their data, which has since been supported by other analyses, shows that candidates like Jan Brewer and Sharron Angle received a paucity of Latino votes, about 12% for Brewer and 8% for Angle. This is far from victorious for GOP-Latino relations.

Most interesting, Segura and Barreto show wide support for the Dream Act by Latinos of all stripes. Their data shows that when asked, “How important do you think it is that the Congress and President act swiftly to pass the DREAM Act?”, fully eighty percent of Latino Republicans said it was somewhat important, very important or extremely important. By comparison, ninety percent of Latino Democrats agreed.

Fortunately for the GOP, those with national aspirations know better and can see the forest through the trees. Newt Gingrich has taken a sensible approach to immigration and has outlined reforms in tune with the majority of Americans who desire a pathway to citizenship for migrants who choose it and a clear pathway back home for those who do not. Rick Perry of Texas has also threatened to veto any anti-immigrant legislation like Arizona’s SB1070.

Susana Martinez, the newly elected Governor of New Mexico, has taken a similar stance. Marco Rubio, Florida’s favorite hijo, who took an early hardline stance on immigration, has agreed to not use the term “illegal” to describe immigrants who find themselves without proper documentation. Even Haley Barbour has noted the positive benefits of migrant labor and their contribution to society.

See a pattern here? These are not squishy Republicans. They are practical ones. There is nothing about protecting our borders that requires us to be bigoted or insensitive to the impact our policies have on Latino families. Republicans with legitimate national aspirations are getting a clue. They look at the electoral landscape and see a Latino demographic that will have an important impact on the future of electoral politics.

The states with the largest and fastest growing Latino populations are California, New York, Illinois, Florida, Texas, New Jersey, Colorado, Nevada, Arizona and New Mexico. By the time the 2010 Census data comes out, we will see emerging Latino communities in Indiana, Nebraska, Iowa, Georgia, Alabama, and elsewhere. While you can get away with bashing immigrants in Alabama and Iowa, that message won’t make much sense in the other states. This is particularly important in states like Texas, Florida, Colorado, Nevada and New Mexico, where the Latino electorate has grown so much, that small swings can have national implications.

Sharron Angle paid a heavy price for faulty data. She thought she could ride a wave of populism on the fear and anger of white voters resentful of Latino migrants. She was disgracefully wrong. Carly Fiorina and Meg Whitman in California were wrong because they also were relying on faulty data. They were playing the game of a decade ago, using data gathering techniques with old assumptions. Jan Brewer’s strategy will work for another decade, maybe fifteen years at most. At least a few folks in the GOP are playing tomorrow’s game and with the exception of the Tea Party folks such as those in Colorado who chose an ass for a lion in Tom Tancredo, the rest of the GOP should start hedging on reality.

Stephen A. Nuño, PhD is an Assistant Professor in the Department of Politics and International Affairs at Northern Arizona University. This piece was first published by Latino Decisions.