The Gaslighting of the Tenderloin 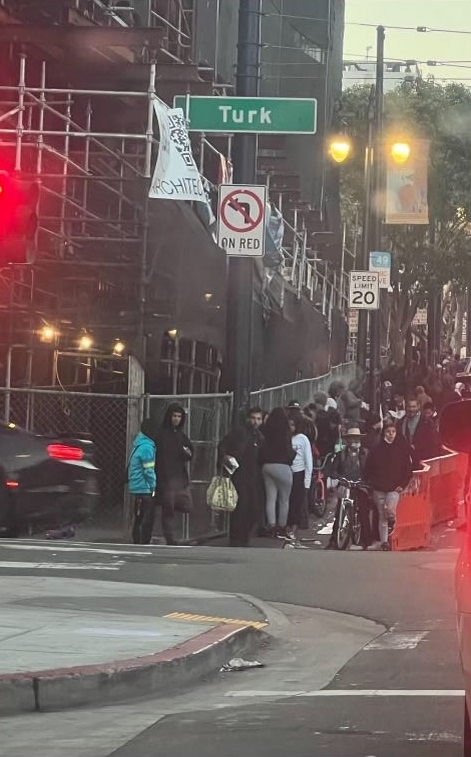 No Police Crackdown on Dealers, No Sense of “Emergency”

“Police data from before and after the Tenderloin emergency shows arrests for drug-related crimes in the neighborhood are largely unchanged“—SF Chronicle February 25, 2022

Over two months ago, San Francisco Mayor London Breed announced a police crackdown against drug dealing in the Tenderloin. She soon followed that by declaring a State of Emergency. Breed gave the community hope that its sidewalks would soon be reclaimed from drug dealers.

But no crackdown on drug dealers ever happened. Not even for a week.

*Police visibility in the Tenderloin has not increased;

*Promised foot patrols have not happened;

*Shootings and Overdoses have continued.

It’s all been a colossal lie.

Unlike the sudden dispatching of 40-80 officers to address the November theft of handbags in Union Square—most stayed there through year’s end – it’s been business as usual in the Tenderloin despite the mayor’s announcement and the Board’s 8-2 vote to declare an Emergency.

National media loved the story of a Black mayor taking on the city’s progressive political establishment.  This framing was never true—the Board backed the Emergency and the mayor controls the SFPD —but it was the story many wanted to write.

The Washington Post  even echoed that theme last week, downplaying the lack of implementation of the mayor’s plans. The Post saw a conflict between “fixing” the neighborhood and “San Francisco’s stated values.” Yet San Francisco has always opposed open drug dealing—outside the Tenderloin. The Post’s framing missed the real betrayal of the city’s values: City Hall’s allowing drug dealing in a multi-racial working class neighborhood that has successfully prevented gentrification.

After more than two months of police inaction, the strategy appears clear. City Hall is laying the groundwork for declaring that its Tenderloin police crackdown failed.

Mayor Breed will claim she tried her best but the challenge proved too difficult. She and others will vow to never stop trying. The media will blame this failure on the Tenderloin’s  “intractable” drug and crime problem.

That there never was a crackdown and the State of Emergency did nothing to help the Tenderloin  will soon be forgotten. And the next time people like me urge a crackdown on drug dealing in the Tenderloin we will be told—we tried your strategy and it failed.

What does Mayor Breed and City Hall gain from this self-induced failure? The ability to continue using the Tenderloin as a drug dealer containment zone.

There’s a name for what City Hall is doing to the Tenderloin. It’s called gaslighting. A “gaslighter” “presents a false narrative to another group or person which leads them to doubt their perceptions and become misled (for the gaslighter’s own benefit).”

A third false narrative is connecting the crackdown to the opening of a facility to provide services to the unhoused citywide. Gaslighting false claims of action to help the Tenderloin involves naming the facility the Tenderloin Linkage Center when 1. It is in UN Plaza, not the Tenderloin  2.  It serves anyone that walks over rather than focusing on drug users  from the Tenderloin  3. It does nothing to address what Tenderloin families were protesting about: drug dealing in their neighborhood.

City Hall backed this false narrative via a tweet from the Department of Emergency Services: “The #Tenderloin Emergency Initiative is a partnership between community & @sfgov connecting all in the TL to city services, improve safety & invest in the community.”

A partnership? Without one partner doing anything to stop open drug dealing?

City Hall hopes that repeating that the Linkage Center helps the Tenderloin will cause people to believe it. Yet the Center has been a complete failure for all of the city—the SF Standard reported on February 16 that “out of 4,458 visits to the center in the last two weeks, only four people completed a linkage into substance abuse programs. And since it started operating, only 1.8% of total visits to the center resulted in the successful linking of people to services.”

The Linkage Center has attracted so many users and dealers to UN Plaza that the SFPD now heavily staffs the area. So the Center has diverted police from the Tenderloin neighborhood while doing nothing to help the community.

Mayor Breed added to the gaslighting of the Tenderloin’s problems when she announced last week that the police would start arresting drug users. Why prioritize arresting users when the police are not targeting dealers?

I’ve never called for arresting users. Nor has anyone I work with in the Tenderloin.  Tenderloin families did not push for the arrest of users when they met with Mayor Breed.

The mayor’s attempt to shift focus from what’s ailing the Tenderloin from dealers to users is troubling. It either reflects an administration completely adrift from the Tenderloin’s needs or is another part of the gaslighting strategy. It fits the latter because  the mayor’s new plan to target users seems calculated to rally opposition. Once strong political opposition emerges against arresting users, the mayor will claim that her efforts to protect Tenderloin families were blocked by progressive activists and the Board of Supervisors.

If that sounds cynical, ask yourself why the city is suddenly focusing on arresting Tenderloin drug users when the SFPD hasn’t done anything to increase the pressure on dealers? Why prioritize users when all of the community stakeholders see removing dealers as the overwhelmingly top priority?

The 90-day Tenderloin Emergency period has one more month to go. Unless something radically  changes, it will end without City Hall even trying to implement a crackdown on dealers.

When the crackdown was announced some felt that it would bring a short-term improvement but might not be sustainable. But the neighborhood hasn’t even got a single week without more drug dealers on sidewalks. More dealers than ever existed under prior mayors.

Mayor Breed recently increased funding to allow Urban Alchemy’s expansion to a few more blocks. That’s the only action to reduce drug dealers that has occurred in the Tenderloin since her December 14 announcement. And that gain is limited by Urban Alchemy workers leaving at 7pm, which is when drug dealers then return to sites protected during the daytime. The new funding also still leaves key drug dealerblocks without any protection.

The groundwork is being laid to make the Tenderloin a permanent drug dealer containment zone. The gaslighting narrative will be that there’s no point pushing for future crackdowns on drug dealers in the  Tenderloin because the 2022 effort failed. And Tenderloin families, small businesses and workers will be told that the police “can’t solve the problems of the Tenderloin.”

I call that Bullshit! As so should all of San Francisco!

The Tenderloin is Not Hamsterdam

Ever since Season 3 of The Wire people have compared the Tenderloin to the show’s fictional Hamsterdam neighborhood. But the open drug dealing and using allowed in Hamsterdam was in a deserted part of the city. When the police discover an elderly woman living there, they quickly found a place for her to move.

Hamsterdam’s message is that cities should stop drug dealing where people live or small businesses operate. Or where, as in the Tenderloin, kids walk to and from school. The gaslighting of the Tenderloin particularly denies a safe and healthy upbringing to the kids. Kids that San Francisco political leaders claim to care about.

The true story of the Tenderloin is this: San Francisco has long used a large, multi-racial working class historic neighborhood as a drug dealer containment zone. The Tenderloin is punished by City Hall for preventing gentrification and the displacement of its low-income residents.

Mayor Lee vowed to end this role for the Tenderloin. He brought more business investment to the neighborhood than in the prior fifty years combined. Lee did not stop all drug dealing. But Mayor Breed has allowed the Tenderloin to become more overrun with drug dealers than ever before.

The Tenderloin has open drug dealing for one reason: the city allows it.

In The Wire,  community residents sold drugs in front of their homes to fellow residents. But most dealers arrested in the Tenderloin do not even live in San Francisco. Contrary to popular mythology, there is no evidence that Tenderloin residents are more likely to buy drugs than other city residents.

The market for Tenderloin drugs is driven by the lack of police enforcement, not neighborhood demand.

The national media should be discussing how San Francisco talks about caring about the poor and working class but then turns the Tenderloin into a drug dealer containment zone. That offense against “San Francisco values” continues.

Mayor Breed has a chance to use her March 9 State of the City address to set things right. She needs to announce that she has thus far failed to carry out her commitments to the Tenderloin families she pledged to help. She needs to pledge a real crackdown starting that day and continuing until Tenderloin sidewalks are as clear of dealers as is taken for granted in most San Francisco neighborhoods.

The residents, workers and small businesses in the Tenderloin deserve better. And we will not stop fighting until the Tenderloin gets the same level of public safety as other neighborhoods.