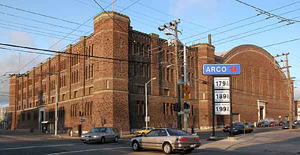 The recent purchase of the Mission’s historic Armory by Kink.com, and its planned use as a bondage video studio, has raised questions about who, if anyone, is guiding the neighborhood’s future. Business and development interests, along with some merchants and residents, believe the Armory ended up as a site for porno films because pesky neighborhood activists prevented a more neighborhood-serving use. Activists, however, long opposed market-rate housing at the Armory, and have sought to delay any Mission development until their neighborhood plan is released. The irony of all this finger-pointing is that the Mission District is actually thriving, and that for all the talk of gentrification and anti-development zealotry, much of the community has remained remarkably unchanged over the past 25 years.

San Francisco’s Mission District has long been seen as the epicenter of the city’s battles over gentrification. Although the adjacent neighborhoods of Noe Valley and the Castro, have experienced far more gentrification, and much steeper increases in rents and home prices, over the past 25 years, the Mission has gotten more attention because of concerns for the future of its Latino majority population.

But after all the eviction of dance studios, the dot-com boom, and talk of the Mission symbolizing a “Hollow City,” the neighborhood’s two chief corridors—Mission Street and 24th Street—remain heavily Latino. While Mission Street does feature some upscale, gentrifying-type restaurants and clubs, 24th Street from Mission to York is no more upscale than when I lived nearby from 1980-83.

If someone did a survey of the 24th Street corridor, the number of businesses that are still operating in the same location since the early 1980’s is striking. This may be one of the most stable commercial corridors in San Francisco, despite all of the concern over rising rents and business displacement in the Mission neighborhood.

The continuity of businesses in the 24th Street area is so great that the same employees who sold me chicken at Mission Poultry in 1980 were still at their posts when I visited in mid-January. The Golden Crust Pie shop at 24th and Capp has recently closed, but it was a victim of competition from neighboring Dianda bakery, which has been on Mission and 24th for about 25 years.

Although Latino-oriented businesses and Latinos walking down the street dominate 24th Street, some activists are alarmed over the construction of a nine-unit condo complex near 24th and Bryant. This small project is seen as the harbinger for future gentrification, despite it being the only condo project built on the street in the past three decades.

The stretch of the Mission along 16th Street from Valencia to Folsom is also largely unchanged over the past 25 years. The Bart stations remain prime areas for heroin sales, a clear sign that the Mission misses the late New Mission News editor Victor Miller’s constant harping about the problem.

Much of the alarm around Mission gentrification surrounds the stretch along Valencia from 22nd to 16th Streets. But the people I saw crowding Boogaloo at Valencia and 22nd one Saturday looked more like precinct-walkers from the Matt Gonzalez campaign than corporate attorneys, real estate developers or those who have struck it rich in the computer industry.

New College’s continued growth has helped boost bookstores and other retail uses in the Valencia area. The impact of these progressive students in the area has done more to define Valencia Street than has the presence of its upscale restaurants

The former industrial areas around Harrison and 17th streets have been gentrified by the construction of new condos and lofts. These units likely created a bigger customer base for Medjool’s, 12 Galaxies and other Mission hot spots, but this housing did not directly displace Latino families or businesses.

Housing costs have risen in the Mission like everywhere else, and many Latino families are only able to stay in the community by living in overcrowded housing. But this was also the case in the early 1980’s, a period where evictions of Latino families was at an even higher rate than has occurred in the Mission in recent years.

But the chief problem in the Mission is a lack of trust among the various interests that prevents “win-win” development. With developers wanting to play by the same rules as in other neighborhoods, and activists seeking greater affordability requirements that better reflects Mission—rather than San Francisco—income levels, an equilibrium exists where little if any new affordable units get built.

In a speech last week in San Francisco, Oakland Mayor Ron Dellums laid out a framework for development that activists in the Mission and elsewhere should ponder.

Dellums noted that the real question is “what values shall frame our development.? Who’s at the table to shape development, and who ultimately benefits from development?

Dellums has made it clear that Oakland cannot improve its schools, reduce poverty, get jobs for young people or give people selling drugs on the corner new options without development and economic growth.

The process Dellums describes could have brought such positive outcomes at the Armory. Instead, the Mission’s young people and working families will gain nothing from the future use of the site.

The Armory could prove a wake-up call for future Mission unity. We will see if that emerges after activists unveil their long-anticipated Mission neighborhood plan in the coming weeks.