The Forging of Identity Politics 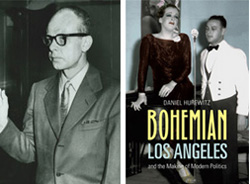 Before some Bay Area readers skip this review, let me make one fact perfectly clear: Bohemian Los Angeles is a brilliant work that does not require an interest in Los Angeles history, or that readers even like the city. Rather, this is a book written for San Francisco, whose combination of progressive/gay/lesbian politics is an outgrowth of the organizing work that author Daniel Hurewitz shows began in Los Angeles during the 1930’s and ultimately helped build a national movement. Bohemiam Los Angeles shows the evolution of gay identity from the early 1900’s through the 1950’s, and links this development to the emergence in the 1930’s of a radical political identity through the American Communist Party, as well as the parallel building of a new identity among artists. This convergence of gay, Communist, and radical arts identities in the Los Angeles community of Edendale (now Silverlake) explains Hurewitz’s title, and results in an inspiring book deserving of the widest possible readership.

The gay and lesbian civil rights movement has advanced so far, and so fast, in the past two decades that I wonder how many know that its origins lay with the vision of Harry Hay, a former Communist Party member. Hay caused a huge controversy in the 1950’s by arguing that homosexuals constituted a distinct oppressed minority, and for pushing them to band together politically to improve their lot. Hay’s analysis ultimately prevailed, but not before his bold agenda caused his removal from the leadership of the Mattachine Society, the organization he created.

Harry Hay is among the many figures of recent history that Daniel Hurewitz brings to life in Bohemian Los Angeles. The book begins with the story of Julian Eltinge, one of the leading theater stars of the 1910-1930 era. Eltinge drew record crowds while performing as a female impersonator. Although he was secretly gay, Eltinge promoted a bold off-stage masculinity, making it clear that his feminine stage roles had nothing to do with his actual inner life.

Eltinge allows Hurewitz to describe an era in which one’s identity was not based on the gender of one’s sexual partners. Men arrested for having gay sex were viewed as straight men that made a mistake, and even most gay men did not see their sexual desires as placing them in a distinct subculture.

Starting in the 1930’s, however, police crackdowns on homosexual activity led to the forging of what soon became known as a gay identity. How Harry Hay and others responded to this sudden increase in state repression set the direction for the emergence of America’s gay rights movement.

But Bohemian Los Angeles is more than a history of an emerging gay identity. Rather, Hurewitz links this to the related and parallel rise of left-wing political activism. The key players in both movements resided in the Edendale community North of Hollywood, and Hurewitz’s description of the interrelationship between two constituencies striving for a distinct identity—one based on gender, the other political orientation— is what makes Bohemian Los Angeles such a stunning achievement.

Having read much about the well-meaning activists who joined the American Communist Party in the 1930’s, I did not expect to be moved by Hurewitz’s of their sacrifices and travails. But I was wrong. Hurewitz’s portrayal of a political left unified by marriage, friendship, and a common belief in social, racial and economic justice is as effective as his longer sections on the emerging gay community. In fact, Hurewitz’s accounts of Woody Guthrie singing the Do Re Mi, the pain expressed by activists describing broken friendships of fifty years ago, and the tradeoffs between romantic love and Party loyalty will bring an emotional response even from readers who are not sympathetic to the political agenda of those involved.

Hurewitz’s sections on gay and Communist Party identities are effective because both Los Angeles-based movements became part of the larger stream of history. In contrast, his section on Edendale’s artist community suffers from the relative obscurity of most of those discussed, and their lack of clear connection to future arts movements. Hurewitz succeeds in describing how artists also forged a distinct identity and sense of community. But his accounts of the experiences of woodworkers like Paul Landacre, the cultural role of Jake Zeitlin’s bookshop, and other artists contributing to the “bohemianism” of Los Angeles in the 1920’s and 1930’s fall flat due to their lack of connection to a broader, longterm historical context.

Harry Hay is the star of Bohemian Los Angeles, both because his role as a gay Communist directly linked the two communities, and because he was one of the great visionaries of 20th Century America. As a Communist, Hay viewed blacks and Latino’s as oppressed social minorities. He argued that sexual orientation was as fundamental as the racial identities of these groups, and that gays had to join racial minorities in politically organizing around their identity. When Hay made these arguments in the 1950’s, they were viewed as “leftist.” Today, such views are the status quo.

Harry Hay could well be described as the founder of gay identity politics in America. Why is there no major building, street or park named after him in San Francisco? Has Hay’s membership in the Communist Party prevented the person whose analysis and organizing made people like Harvey Milk possible from getting his historic due?

Hurewitz gives Hay his just credit, and if this book is as widely read in San Francisco as it deserves to be, city officials will finally give Hay the type of naming honor that the George Washington (or Karl Marx) of the gay and lesbian movement richly deserves.