‘The Fonz’ Headlines Corporate Retreat on How to Lock Out Unions 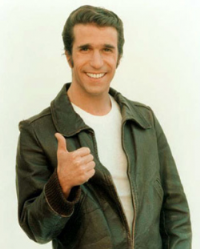 The NFL referee lockout debacle, resolved after a slew of bad press for the league, has highlighted the difficulties that lockouts pose for companies. When calling in scabs so as to put the screws to employees in contract fights, employers can’t always maintain the quality of their product. (Look no further than Monday night’s officiating at the Seahawks-Packers game.)

In response, a shadow industry of labor relations consulting has emerged to advise companies on how to maximize productivity during lockouts. For a fee, corporations that lock out their workers can hire a service that will provide “skilled” scab replacement workers, legal support, security and even housing for the scabs.

One of these work-stoppage consultant groups, IMAC Services (which merged with AFI International as of August to become AFIMAC), held a conference on May 10-11 entitled “Navigating Your Labor & Union Landscape” at the luxury Hyatt Regency Scottsdale Resort and Spa at Gainey Ranch in Arizona. Conference workshops and speakers advised employers how to take the necessary steps to prepare for problems with their unions.

The headliner was none other than actor Henry Winkler, a.k.a. “the Fonz.“

Winkler has been active in the Screen Actors Guild, and once memorably called out Republican Congress members for “say[ing] no about everything” in a controversial Headline News show. But on this day, the actor was slated to give an inspirational keynote speech to companies preparing for struggles with unionized workers. The conference invite [PDF], obtained by Working In These Times, explained, “Henry Winkler knows a thing or two about overcoming adversity and of course Hollywood, having spent nearly three decades enjoying success in the business.”

In addition to the keynote from Fonzie, the conference promo billed speeches from a host of labor-relations experts. Among them was John J. Toner, a 20-year veteran of the National Labor Relations Board who has served as its executive secretary. Also in the lineup was Richard S. Levick, a labor attorney, whose bio boasts that he “represents countries and companies in high-stakes global communication matters–from the Wall Street crisis, and the Gulf oil spill to Guantanamo Bay and the Catholic Church.” Toner, Levick and others were slated to advise on such topics as: