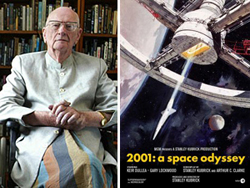 In 1968, I was a young lad of eleven, an avid reader of science fiction and desperate to see the latest and much heralded film of it’s genre, Stanley Kubrick’s “2001: A Space Odyssey”. The anti-grav Pan Am Space Clipper, the Moon-bus, the eerie black Monolith, the psychedelic space-scapes and that incredibly scary computer, HAL 9000, was something I just couldn’t miss. This was my “Star Wars” and I begged my parents to let me go see it. My Mom paid the kid across the street to drive me to Washington, D.C.’s famed 70mm Uptown Theater, and after obtaining a ticket, I made my way to it’s balcony seats. For the next several hours, I sat mesmerized by Kubrick’s stunning cinematography and special effects. I knew I was watching something we had never seen before, but at age 11, there were things going on the film that just I couldn’t quite comprehend. Undaunted, I decided to learn more about the story and the writer behind it. What I found was the mind of Arthur C. Clarke, a science fiction genius and visionary whose tales have shaped the way we look at technology forever.

Arthur Charles Clarke, was born in Minehead, Somerset, England and as a boy enjoyed stargazing and reading old American science fiction pulp magazines. After secondary school and studying at Huish’s Grammar School, Taunton, he was unable to afford a university education and got a job as an auditor in the pensions section of the Board of Education.

During World War II, he served in the Royal Air Force as a radar specialist and was involved in Britain’s early warning radar defence system, which contributed to the RAF’s success during the Battle of Britain. Clarke spent most of his wartime service time working on this “Ground Controlled Approach” radar, also documented in the semi-autobiographical “Glide Path”, his only non-sci-fi novel.

Clarke often corresponded with the writer C. S. Lewis, author of the “Chronicles of Narnia”, in the 1940s and 1950s and they once met in an Oxford pub, The Eastgate, to discuss science fiction and space travel. Clarke, after Lewis’s death, voiced great praise for him, saying the “Ransom Trilogy was one of the few works of science fiction that could be considered literature”.

In 1948 Clarke wrote “The Sentinel” for a BBC competition. Although the story was rejected, it changed the course of Clarke’s career. Not only was it the basis for 2001, A Space Odyssey, but “The Sentinel” also introduced a more mystical and cosmic element to Clarke’s work. Many of Clarke’s later works featured a technologically advanced, but prejudiced mankind being confronted by a superior alien intelligence. In stories like, “The City and the Stars”, “Childhood’s End”, and the “2001” novels, these encounters produced a conceptual breakthrough that accelerates humanity into the next stage of its evolution.

Clarke’s first venture into film was the Stanley Kubrick-directed “2001: A Space Odyssey”. Kubrick and Clarke had met in 1964 to discuss the possibility of a collaborative film project. As the idea developed, it was decided that the story for the film was to be loosely based on Clarke’s short story “The Sentinel”, written in 1948 as an entry in a BBC short story competition. Originally, Clarke was going to write the screenplay for the film, but this proved to be more tedious than he had estimated. Instead, Kubrick and Clarke decided it would be best to write a novel first and then adapt it for the film upon its completion. However, as Clarke was finishing the book, the screenplay was also being written simultaneously.

Clarke’s influence on the directing of 2001: A Space Odyssey is also felt in one of the most memorable scenes in the movie when astronaut Bowman shuts down HAL by removing modules from service one by one. As this happens, we witness HAL’s consciousness degrading. By the time HAL’s logic is completely gone, he begins singing the song Daisy Bell. This song was chosen based on a visit by Clarke to his friend and colleague John Pierce at the Bell Labs Murray Hill facility. A speech synthesis demonstration by physicist John Larry Kelly, Jr was taking place. Kelly was using an IBM 704 computer to synthesise speech. His voice recorder synthesiser vocoder reproduced the vocal for Daisy Bell, with musical accompaniment from Max Mathews. Arthur C. Clarke was so impressed that he later told Kubrick to use it in this climactic scene.

Due to the hectic schedule of the film’s production, Kubrick and Clarke had difficulty collaborating on the book. Clarke completed a draft of the novel at the end of 1964 with the plan to publish in 1965 in advance of the film’s release in 1966. After many delays the film was released in the spring of 1968, before the book was completed. The book was credited to Clarke alone. Clarke later complained that this had the effect of making the book into a novelisation, that Kubrick had manipulated circumstances to downplay his authorship. For these and other reasons, the details of the story differ slightly from the book to the movie. The film is a bold artistic piece with little explanation for the events taking place. Clarke, on the other hand, wrote thorough explanations of “cause and effect” for the events in the novel. Despite their differences, both film and novel were well received.

In 1982 Clarke continued the 2001 epic with a sequel, “2010: Odyssey Two”. This novel was also made into a film, “2010: The Year We Make Contact”, directed by Peter Hyams for release in 1984. Due to the political environment in America in the 1980s, the novel and film present a Cold War theme, with the looming tensions of nuclear warfare. The film was not considered to be as revolutionary or artistic as 2001, but the reviews were still positive.

Clarke’s email correspondence with Hyams was published in 1984. Titled, “The Odyssey File: The Making of 2010”, and co-authored with Hyams, it illustrates his fascination with the then-pioneering medium and its use for them to communicate on an almost daily basis at the time of planning and production of the film while living on different continents. The book also includes Clarke’s list of the best science-fiction films ever made.

“2001”, is clearly Clarke’s most famous work, goes well beyond the 1968 movie, and its 1984 sequel. There were two more sequels that have not been adapted to the cinema: “2061: The Third Odyssey” and “3001: The Final Odyssey”. In “2061”, Halley’s Comet swings back to nearby Earth, and Clarke uses the event as an excuse to take an aged Dr. Heywood Floyd on a romp through the solar system, visiting the comet before crash-landing on Europa, where he discovers the fates of Dave Bowman, HAL 9000, and the Europan lifeforms which have been protected by the Monoliths. With “3001: The Final Odyssey”, Clarke returned to examine the character of astronaut Frank Poole, believed killed outside Discovery by HAL in the original novel and film.

Clarke lived in Sri Lanka from 1956 until his death there on March 19th, having emigrated there when it was still called Ceylon, and was knighted “Sir Arthur Charles Clarke” in 1998. An avid scuba diver and a member of the Underwater Explorers Club, living in Sri Lanka afforded him the opportunity to visit the ocean year-round. It also inspired the locale for his novel “The Fountains of Paradise” in which he described a “space elevator”. It’s been said that Clarke believed that this would ultimately be his legacy, more so than geostationary satellites and thought his space elevators would ultimately make space shuttles obsolete.

His many predictions culminated in 1958 when he began a series of essays in various magazines that eventually became “Profiles of the Future” published in book form in 1962. A timetable up to the year 2100 describes inventions and ideas including such things as a “global library” for 2005.

Clarke once wrote, “Any sufficiently advanced technology is indistinguishable from magic…”

E. “Doc” Smith is a musician and recording engineer who has worked with the likes of Brian Eno, Madonna, Warren Zevon, Mickey Hart, Jimmy Cliff, and John Mayall among others. He is also the inventor of the musical instrument the Drummstick, and can be reached at http://myspace.com/edoctorsmith